With its Green Deal unveiled in December 2019, the European Union has set out the most ambitious climate goals of any major economic power – a complete decarbonisation down to net-zero emissions by 2050.

As transport makes up a quarter of EU carbon emissions, the European Commission estimates that a 90% decrease in that sector will be necessary to meet the 2050 target.

For road transport, this will require a massive shift to electric mobility, with European automakers finally rolling out EV models in large numbers over the past year.

But automakers say they haven’t forgotten about biofuels entirely.

“We’re highly interested in that, because the internal combustion engine is not going to go away,” said Paul Greening, from the European Automobile Manufacturers Association (ACEA).

And while manufacturers are embracing electric vehicles, they’ve also maintained interest in biofuels because they can help decarbonise the existing car fleet, he told a EURACTIV online event last week.

“There is the capability there for making a bigger dent in total road transport emissions by providing solutions to old and new vehicles,” he said.

Part of the reason why biofuels have fallen out of favour is the tumultuous regulatory adventure they’ve been going through over the past decade. The EU adjusted its policy to limit crop-based biofuels in transport after concerns were raised about EU renewable fuel targets driving deforestation abroad – a process known as indirect land use change (ILUC).

And even though new second generation biofuels are being developed, they are not yet available in sufficient volumes, which is causing uncertainty for the industry. That uncertainty has been reinforced by language in the Commission’s recent climate plan for 2030, which talked about phasing out the internal combustion engine – which biofuels operate in.

So, is the EU green deal aiming to increase the use of biofuels?

“Yes biofuels is part of the fuel mix today and will remain an important part of that in the next years,” said Alexandre Paquot, head of the road transport Unit at the European Commission’s climate directorate.

“When we look at our analytical work underpinning the climate target plan we see that biofuels, and also more broadly renewable low-carbon fuels, will have a role to play,” he told the EURACTIV online event.

“You can’t describe that regulation as technology neutral because it is essentially a limit on tail pipe emissions,” he said. “If emissions of the vehicle are elsewhere, in the production or the energy of the vehicle, they are not regulated,” he remarks.

The industry’s complaint is that electric vehicles are getting an artificial boost from current EU regulation because they don’t produce emissions from the tail pipe. In reality, they say electric cars can also be emissions-intensive depending on the electricity mix of the country they’re running in.

While biofuels have been subjected to a regulatory crackdown in recent years, the true lifecycle impact of electric vehicles is still not fully understood and there is as yet no sustainability guarantee for how they are produced, charged and disposed of.

“It’s clear there’s no silver-bullet solution to decarbonisation right now,” said Dáša Mamrillová, EU affairs manager at biofuels producer Envien. “We need to make the best use of all solutions, and especially solutions that work today and are shown to be sustainable, including biofuels.”

Still, there was some scepticism among the audience about whether the EU legislative reform has really put the ILUC issue to bed. One participant for instance questioned whether land use effects are being measured for second generation biofuels.

But according to Mamrillová there’s no need to re-open the debate on ILUC. “What biofuels producers really need is policy stability and consistency to promote more investment in technology innovation,” she said.

Paquot said the Commission is also in favour of a holistic approach to reduce transport emissions and is aware of the concerns about current legislation disincentivising renewable fuels.

“Some are calling for one legislation which would address both the tailpipe emissions and the way fuels are being produced and used,” Paquot said, adding the Commission will examine this possibility when EU climate and energy laws come up for a revision in 2021.

But he noted that so far, national governments have preferred to address these two things separately, creating clear differentiated responsibilities for the producers of vehicles and producers of fuels.

“What we have seen so far in terms of suggestions would kind of mix the two, and we are not completely sure that this would bring clarity and certainty, also for the producers of vehicles,” Paquot said.

“But we’ll be looking at that again in the upcoming review,” he added. 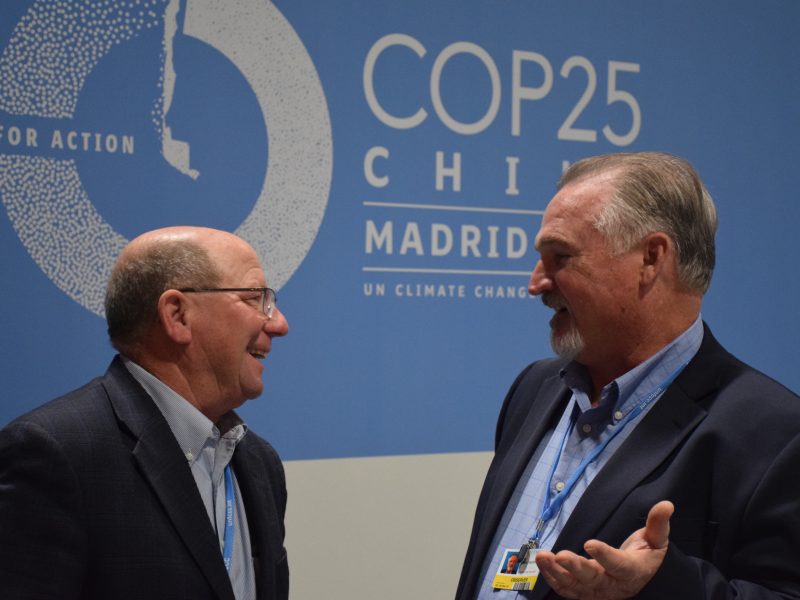 Until electrification of transport is fully in place, ethanol could be used as a “bridge” to make fuels cleaner, US farmers told EURACTIV.com at the COP25 in Madrid.