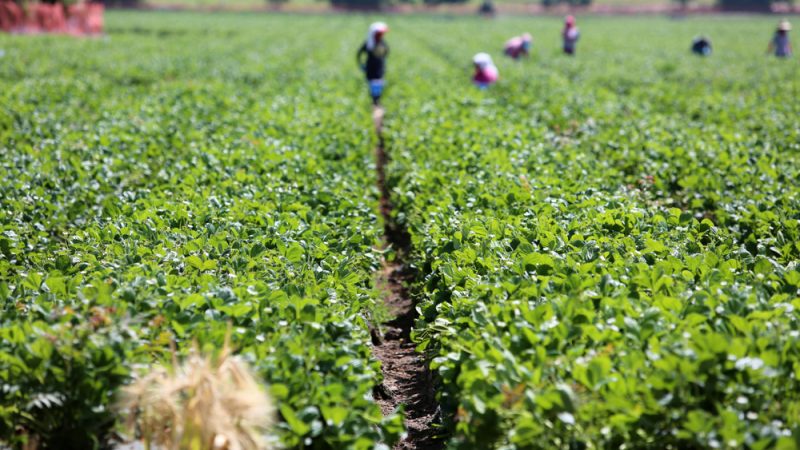 With just one week to go before the start of the harve season, labour shortage in Italian farming causes concerns at all levels of the food supply chain. [SHUTTERSTOCK]

Every year, Italy regularise selected migrant workers through the so-called Decreto Flussi (literally ‘flows-decree’) which set the quota of non-EU citizens allowed to enter the country to work.

The decree is issued by the Interior Ministry concomitantly with the start of harvest time. Last year the quota was set at 30,850 workers, of which 18,000 were earmarked for seasonal work.

When Matteo Salvini, leader of the anti-migrant party Lega, was Interior Minister in 2019, the publication of Decreto Flussi was delayed until the end of April, causing anger among farmers.

“This year, a lot of regular migrant workers will not come to Italian farms. We need at least 200,000 non-EU workers and we need that the decree is released immediately,” said Gori on his Twitter account.

Bergamo, which has become infamous for the military vehicles carrying hundreds of coffins away from the city, has 2,060 confirmed deaths from coronavirus. However, according to an estimate carried out by the local daily L’Eco di Bergamo using data provided by local municipalities, the real death toll was rather of 4,500 victims in the last month for the whole province.

Criticism from Gori’s proposal of 200,000 non-EU workers come from Lega. “It is incredible that in the midst of an epochal emergency like the one we are experiencing, there is still someone who, instead of thinking of protecting the work of Italian people, makes appeals for the formulation of a flow-decree for non-EU citizens,” said MEP Marco Zanni, group leader of far-right group Identity and Democracy (ID) at the European Parliament.

Romanians make up the lion’s share, with a community of more than 105,000 agricultural seasonal labourers working on Italian farms.

This year the agricultural workforce is lacking either because foreign labourers are blocked in their countries of origin or feel that coming to Italy would pose health risks.

With just one week to go before the picking of strawberries, the issue becomes more complicated. Asparagus, cauliflowers and zucchini also need to be picked in the coming weeks.

Particularly concerned are the agri-food businesses in Veneto region, where according to the local trade union Fai Cisl Veneto, at least 65,000 farm labourers are needed to ensure a minimum level of harvest.

Last year 79,000 seasonal workers were hired in that area and three out of five were foreigners, coming mostly from Eastern Europe. Only 850 were non-EU citizens coming to Italy through the yearly decree.

“If we do not collect today, we will lose a total of 100,000 jobs as the entire food supply will come to a standstill, Fai Cisl’s Andrea Zanin told Il Corriere del Veneto.

He added that the situation created the paradox that the entire agricultural supply chain is exempted by the restrictive measures taken by Italy’s government to contain the epidemic, but that a lack of personnel will frustrate the ongoing efforts.

Confagricoltura, another farmers’ organisation representing the interests of bigger agricultural entrepreneurs, made a request to both agriculture minister Teresa Bellanova and labour minister Nunzia Catalfo to send jobless and people receiving unemployment benefits to the fields.

In particular, they referred to the unemployed receiving the so-called universal citizens’ income, a flagship measure of ruling party Five Star Movement.

The grant consists of a minimum subsidy of €780 a month, a figure closer to unemployment benefit than to a real basic income.