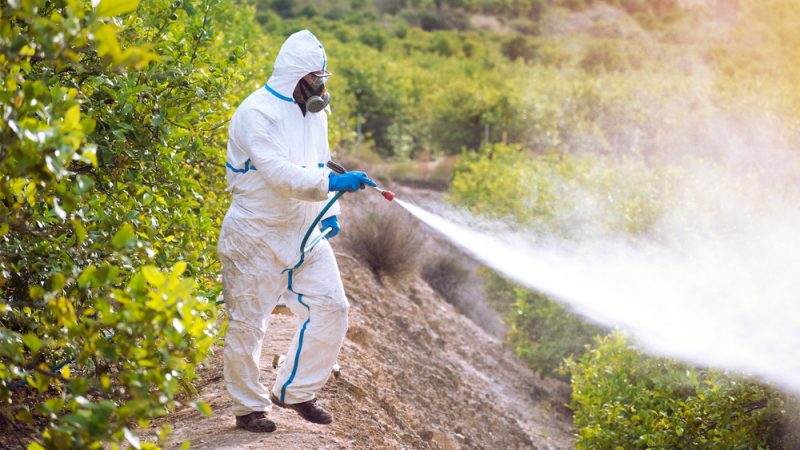 The Commission is planning to prohibited the spraying of pesticides except under certain derogations - for instance, where there is no viable alternative application method to the aerial application. [SHUTTERSTOCK/HERNANDEZ]

The European Commission plans to set an EU-wide binding 50% pesticide reduction target by 2030 but leave member states free to set their own national targets, according to a leaked proposal to revise the EU’s pesticide framework obtained by EURACTIV.

The EU executive aims to revise the overhaul of the Sustainable Use of Pesticides Directive to bring it in line with the objectives of the European Green Deal, which already included the ambition to slash the use and risk of chemical pesticides in half in its food policy part, known as the Farm to Fork strategy.

The adoption of this revision is earmarked for 23 March 2022, according to the Commission’s latest work programme.

Since the numerical value of the reduction target was already included in the Farm to Fork strategy, the main outstanding issue concerns whether to make the target legally binding or pursue it through advisory systems, with the promotion of new techniques to cut chemical pesticides use.

According to the leaked draft, the Commission wants to propose the targets to be legally binding at the EU level with member states that may, however, deviate from the 50% level within the parameters of a binding formula.

“This formula permits member states to justify taking account of changes or expected changes in national circumstances since 2011 and historical progress in setting national targets,” the document said.

However, member states may not set national targets that are lower than 45% unless they can demonstrate that the chosen level is justified by factors such as a change in the profile of pests, in case new pests have emerged.

Considering derogations, “in no case can either of the two 2030 national reduction targets to be lower than 25%,” the leaked document reads, adding that EU countries are also free to set targets that go beyond those set out in the regulation.

Commission’s recommendations can be rejected

Member states are expected to communicate to the Commission two national reduction targets – one for the use and risk of chemical plant production products (PPPs) and one for the use of more hazardous PPPs – accompanied by detailed data that allows verification that the required conditions have been met.

A national action plan including the reduction targets and the details of planned progress should be published on a website and updated every five years by each member state.

Once plans are received, the Commission will review the two national 2030 reduction targets communicated, as well as justifications for any derogations, the leaked draft continued.

In case the Commission is not satisfied with the targets communicated by a country, it could issue a public recommendation asking to increase the percentage level.

However, it would be up to the member state whether to adjust the reduction targets in line with the Commission’s suggestions or reject the recommendations – but a justification for such behaviour is required.

The Commission is also expected to justify increasing targets in certain cases, as well as to publish 2030 Union reduction target trends.

All pesticides prohibited in urban areas

The draft proposal also includes an ambitious prohibition of all chemical pesticides in sensitive areas, such as public parks or gardens, and urban green areas, as well as areas used predominantly by a vulnerable group.

Derogations may be granted by competent authorities for a limited period of time, never exceeding 120 days.

The process for the release of a permit to use PPPs in a sensitive area has to follow specific requirements of transparency such as displaying notices to that regard on the perimeter of the area to be treated.

Spraying pesticides will be also prohibited except under certain derogations – for instance, where there is no viable alternative application method to the aerial application.

In the past decade, the Sustainable Use of Pesticides Directive (SUD) aimed to reduce the risks and the impacts of pesticide use on human health and the environment. However, it has come under fire for the poor implementation in the majority of member states.

The evaluation accompanying this proposal found that the internal and external coherence of the SUD with other EU policies and instruments is “generally strong with no major inconsistencies or overlaps.”

“However, the SUD has only been moderately effective,” the leaked document said.

The Commission has identified some weaknesses in the implementation of the SUD so far, such as in the enforcement of the integrated pest management and the limited effectiveness of member state national action plans, as well as the lack of an effective monitoring system and resulting data limitations on the use of pesticides

For these reasons, “it is is difficult to conclude on the extent to which the SUD has better protected human health from the adverse effects of pesticides.”