France, the Netherlands and Austria have already announced that they will not ratify the deal if Brazil does not improve its environmental actions. Some NGOs have also complained about the lack of measures to protect Amazon rainforest. EPA-EFE/CLEMENS BILAN

The entry into force of the deal – set to forge a trade area between EU27 and Mercosur countries, Argentina, Brazil, Paraguay and Uruguay – will be complex.

The procedure for the deal’s ratification is coming under fire, with some even challenging the content of the trade agreement. In particular, Brazil´s environmental policy is being called into question by some member states.

The EU-Mercosur deal was struck in 2019, after almost 20 years of negotiations. It establishes the largest free trade zone the EU has ever created, covering a market of 780 million people and liberalising most agricultural exchanges.

Although it gives some market opportunities for EU farmers and companies, many European producers fear the agreement will afford better market access for big agricultural giants like Brazil and Argentina.

The so-called “Southern Common Market” or Mercosur hopes to finally sign by the end of this year the association agreement with the European Union reached in June 2019 after two decades of negotiations, Paraguay’s Foreign Minister Antonio Rivas declared on Tuesday (30 June). EURACTIV’s partner EFE Asunción reports.

The European Commission is now translating the agreement into all official EU languages and is expected to forward it to the Council in the coming months.

After Council approval, the deal will head to the European Parliament and, given the recent discussions about the deal, MEPs and EU governments may even move to strike the deal down.

In October, the European Parliament warned that it will not ratify the agreement as it stands, because of Brazilian President Jair Bolsonaro’s environmental policy.

France, the Netherlands and Austria have already announced that they will not ratify the deal if Brazil does not improve its environmental actions. Many NGOs have also raised concerns about the lack of measures to protect the Amazon rainforest.

Spanish farmers and cooperatives organisations demand guarantees for “reciprocity” and a level playing field between the EU and Mercosur.

However, in terms of trade advantages, the agreement is an attractive one.

“Dialogue, women´s and youth inclusion or environmental aspects are social and political sides that can boost sustainable development in the region,” Inter-American Institute for Cooperation on Agriculture sources told Efeagro, highlighting “the support and the strengthening of EU-Mercosur relations, beyond the economic aspects.”

Customs duties rebates will apply to Mercosur countries for fruits and vegetables, while duties on soya products will be removed entirely.

For sensitive agricultural products such as beef, rice, poultry and sugar, the agreement includes safeguard clauses, including phytosanitary and veterinary measures.

The agreement will also protect about 350 of the EU’s geographical indications (GIs) on the Mercosur market.

For Spanish and EU agri-food companies, the agreement means custom duties rebates will be applied to wine, spirits, soft drinks, chocolate, dairy products, some fruits and vegetables, as well as olive oil.

While many farmer organisations in Mercosur states have welcomed the agreement, organisations representing farmers in Europe have been very critical of the deal.

For instance, Spanish and EU farmers are worried about an increase in beef and orange juice imports from the Mercosur bloc.

Mercosur: a surplus in agri-food trade

Spain has an agri-food trade deficit with Mercosur of €2.8 billion, according to Spain’s agriculture, fisheries and food ministry.

In 2019, the EU had a global trade surplus with Mercosur of €5.131 billion, according to the European Commission’s figures. However, the EU recorded a trade deficit of €13.859 billion for its trade of agri-food products. 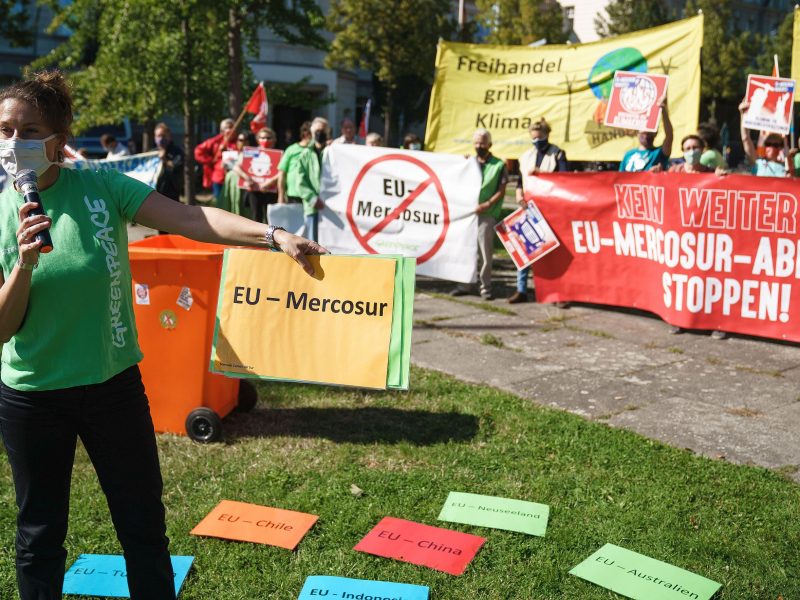 It’s taken 20 years to build but Europe’s trade deal with the ‘Mercosur’ group of South American countries is looking increasingly like a rush job – with its environmental and social aspects the most shoddy, writes Amandine Van der Berghe.