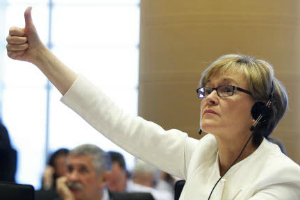 In two days of voting on more than 7,000 amendments to the Common Agricultural Policy (CAP) for 2014-2020, MEPs also backed the extension of protections for sugar producers and grape growers, defying Commission recommendations to extend liberalisation to nearly all agricultural sectors.

The votes focused on the two main financial pillars of the CAP, direct payments to farmers and rural development; new environmental regulations; as well as proposals to phase out price supports for sugar and planting right for wine producers.

The committee’s recommendations – which came during marathon voting sessions on 23 and 24 January – must now be voted on by the full Parliament at its 11-14 March plenary.

Delays in approved a long-term EU budget and turf battles over the CAP rules already mean that the new regulations are unlikely to take effect until 2015.

A summary of the issues and voting follows:

The committee backed the European Commission’s proposal to require that 30% of direct payments (the CAP’s so-called first pillar) be linked to farmers’ environmental performance – such as diversifying crops, leaving up to 7% of land uncultivated to promote biodiversity, and creating permanent pastures.

But bowing to pressure from farmers’ organisations and some EU members states, the committee voted to exempt small farms from the so-called greening rules, as well as growers who meet individual member states’ environmental certification programmes.

Under amendments adopted by the committee, farmers with less than 10 hectares of cultivatable land will be exempt and those with 10 to 30 hectares can apply for exemptions. According to the Parliament, the exemptions will apply to 82% of the EU’s farmers.

The Commission had recommended that only organic farmers should be exempt from greening schemes.

The committee also called for devoting at least 25% of the second pillar of the CAP, which provides co-financing for rural development, to conservation works. Environmental groups and Green MEPs sought much stricter ecological standards on the use of the rural development funds and for cross-compliance with other EU environmental policies, and vow to carry their fight to the plenary.

They vote to end direct subsidies for non-farmer organisations – such as golf clubs and even airports – that do not obtain most of their income from agriculture.

The moves, if eventually adopted, represent one of the most frequent criticisms of the CAP payment scheme that corporate-owned farms and non-farmers are reaping the benefits of a system designed to support family farming.

Still, the committee rejected amendments for deeper cuts to big farms, and ignored Commission recommendations and exempted farmers’ cooperatives from the payment ceiling.

They also backed an amendment to allow national governments to transfer savings from the first pillar to rural development projects.

Under pressure from farmers in the newer EU countries, MEPs took a step to reduce the east-west difference in direct payments to farmers.

Under the Commission’s proposed system, member states with direct payments below 90% of the EU-27 average would close one-third of the gap as of 2014, with disbursements gradually rising to 90% of the EU average by 2020. The committee struck the 90% figure to make it the actual average.

"The committee has voted for a stronger redistribution of aid among member states, as it is difficult to accept differences of roughly €300 per ha between farmers in different member states", said Portuguese MEP Luis Manuel Capoulas Santos (Socialists and Democrats), who was the committee rapporteur on direct payments.

MEPs also supported the EU executive’s plan to devote 2% of the CAP to encourage young people to get into farming.

The committee recommended that farmers under age 40 get a 25% bonus on the direct payment in the first five years they farm. But they capped the payment at 50 hectares, replacing the Commission’s plan for a limit based on the average farm size in each member state.

It also called for additional payments to small farmers of up to €1,500, €500 more than the Commission recommended.

Supporters contend that the protections are needed to support vital agricultural sectors and protect them from cheap competition from aboard and to protect the wine sector, one of Europe’s premier industries.

Both sugar producers – who face an end to prices supports starting in 2016 – and vine growers – who faced the loss of planting rights starting in beginning in 2016 – had the support of French MEP Michel Dantin (European People’s Party), who has fought to extend help for the sugar and vine sectors to prevent what he has said would “lead to closure of farms."

Dantin was the committee’s rapporteur on the market support regulations.

Pekka Pesonen, secretary-general of Copa-Cogeca, which represents farmers and cooperatives, said: “We are pleased to see that some of our demands have been taken on board. We welcome MEPs vote in favour of regulating the EU wine production potential. We also welcome the increased flexibility concerning measures to further green the CAP. In particular, the compromise amendments offer some flexibility on crop diversification and permanent pasture. But we have serious concerns that the EU will be the only state that will be cutting back on its agricultural potential at a time when there are major worries about food security. World food demand is expected to rise by 70% by 2050 and market volatility is on the increase”.

He added: “Some elements of the vote also run counter to the objectives of the CAP. In particular, we oppose any transfers of funds from the first to the second pillar of the CAP which has been proposed by MEPs. The first pillar of the CAP will be more important than ever if the EU is to ensure food security, stability and sustainability. We are also concerned that member states will be able to give very different levels of funds to different measures which could cause serious distortions of competition between member states.”

Trees Robijns, EU agriculture and bioenergy policy officer for the environmental group BirdLife Europe, said: “Conservative forces have managed to delete or water down an appalling 10 out of 21 cross compliance rules. Cross compliance is one of the basic principles of the CAP: those who receive subsidies should respect the law and follow good basic practices. This move takes us back to the dark ages of this policy.”

Marco Schlüter, EU group director of IFOAM, which represents organic producers, said the voting on greening proposals showed that “the committee is unwilling to put forward proposals that would stimulate a paradigm change in EU agriculture.

“Ahead of a full plenary vote, MEPs need to make clear to their agriculture committee colleagues that a Parliamentary position which weakens rather than strengthens the overall green credentials of this reform cannot be accepted. It is critical that the new CAP ensures that all farmers are required to undertake a strong and effective package of greening practices under Pillar 1, in order for EU agriculture to transition towards greater sustainability by 2020. Whereas we welcome the Committee’s recognition of organic farming systems as ‘green by definition,’ the introduction of exemptions from greening and a mechanism of questionable certification schemes should not be a substitute for comprehensive greening.

“As the only directly elected European Institution, the European Parliament has to be bold in counteracting the powerful vested interests that seek to maintain the status quo by sustaining industrial farming practices.”

“It is going to be a difficult debate and a lot of [my] colleagues are not satisfied with the compromises made in the agricultural committee,” British MEP Linda McAvan (Alliance of Liberals and Democrats) said during a hearing in the European Parliament’s environment and food committee.

"Today's vote is a big step forward towards a more sustainable farming model that can respond to the big challenges of climate change and biodiversity loss by reducing energy, water, nutrient use and GHG Emissions while still making a contribution to food security,” Lyon said.

"We are finally moving away from income support without any strings attached. Instead we have begun the move towards a much more targeted funding approach to reward farmers for the public goods they deliver."

"The idea that farmers should band together must not translate into cartels but it should allow them to break free from economic dependence and  guarantee them a decent standard of living,” said French MEP Michel Dantin (European People’s Party), rapporteur for the common markets organisation regulation. “Establishing strong producer organisations for all sectors, with much greater freedom of action than originally proposed by the Commission, is an appropriate way to achieve that aim."

The European Federation of Origin Wines said in a statement: “MEPs adopted by a large majority Mr Dantin’s amendment proposing to maintain the current planting rights regime. EFOW, the European Federation of Origin Wines, welcomes this strong vote in favour of regulation and calls on the Commission and the Council to improve the proposal of the High Level Group on planting rights.”

German MEP Britta Reimers, who negotiated the single Common Market Organisation report on behalf of the Alliance of Liberals and Democrats, said: "ALDE voted against the proposals on public intervention and private storage aid that threaten a potential return of 'milk lakes' and 'butter mountains' and the like. A return to failed policies of the past is neither in the interest of farmers nor consumers."

“We are very disappointed,” said Robert Guichard, president of the Committee of European Sugar Users (CUIS). “We need a balanced, stable and fair EU sugar market, based on competitive, sustainable domestic production, supplemented by imports to the extent needed. Today’s AGRI Committee vote does nothing to support this goal.”

“The Common Agricultural Policy should serve the whole food supply chain. The AGRI Committee vote risks stifling growth at a time when the EU needs economic recovery and employment. SMEs will be hit particularly hard. We strongly urge the European Parliament to consider the broader community interest when it votes in plenary and to commit to a clear end date of the EU sugar quota regime well before 2020,” said Muriel Korter, CIUS secretary-general.

Jamie Fortescue, managing director of the European Starch Industry Association (AAF), condemned the compromise amendment on the sugar regime. “This proposal merely extends an unfair and anti- competitive system, and continues to restrict the European starch industry’s production of isoglucose, a cereal-based sugar, to less than 5% of the total EU sugar production quota.

“In times of economic and financial crisis, continuing to artificially limit the production and competitiveness of a European sector processing EU-grown cereals cannot make sense,” Fortescue said. “The proposed compromise perpetuates a situation of quasi-monopoly for sugar producers that share 95% of the sugar production quota. This breaches the fundamental principle of fair competition enshrined in the EU Treaties.”

One response to “MEPs back a less green, more ‘flexible’ CAP”