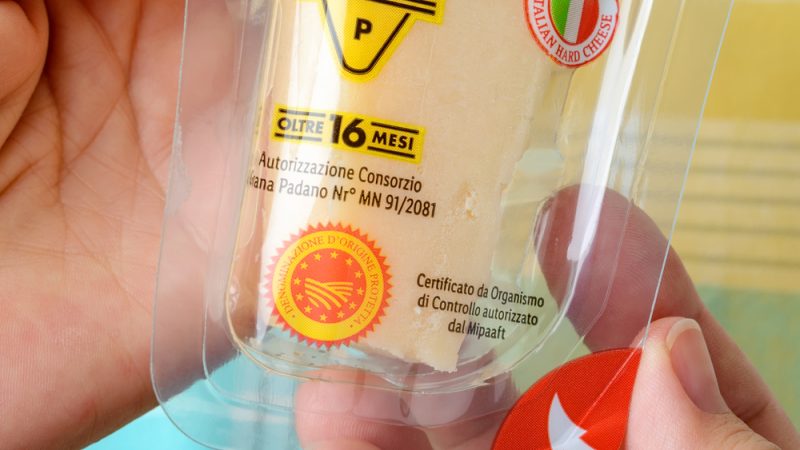 An EU's protected denomination of origins (PDO) label on the package of an Italian cheese product. [SHUTTERSTOCK/MARYIA_K]

Although originally envisaged for the end of 2021, a revision of the GIS policy is planned to be published in the first quarter of 2022.

GIs are designed to protect the names of specific products to promote their unique characteristics linked to their geographical origin and the know-how embedded in the region.

Due to GIs, only dry-cured meat produced in the hills around Parma can legitimately bear the name of Prosciutto di Parma or champagne can only be made using grapes grown in the homonymous French region.

There is increasing speculation in Brussels that involvement of the EU’s intellectual property office (EUIPO) in dealing with GIs could increase, with the Commission’s DG AGRI outsourcing some of its competencies on the matter.

“Rumors and leaks that are coming through this proposal do not go in the direction we hoped,” said the Italian socialist MEP Paolo De Castro during a meeting of the European Parliament’s agriculture committee (AGRI) on Monday (10 January).

He expressed his concerns about moving away from a system focused on links to Europe’s geographic regions toward a “trademark approach”, which is “remote from the approach this committee has stood for many times.”

“We’ve got a system that works, we don’t want a proposal that upsets the current set of rules. Rather, we want more strength, more protection for geographic indications,” the experienced lawmaker stressed.

Likewise, French Christian-democrat MEP Anne Sander echoed concerns against the possibility for the Commission to transfer some of its power in dealing with GIs to the EUIPO.

According to her, the EU needs to protect GIs as a source of pride for farming and European regions. “I think it will be a mistake, therefore, to do that,” she said.

“These are not brand marks but quite different. They’re the know-how and techniques that have been passed down the ages,” she added.

EUIPO is ready to do more

The Commission’s new attempt to strengthen, modernise, streamline, and better enforce GIs for agri-food products is part of a broader intellectual property (IP) action plan to support the EU’s recovery and resilience.

As product names, GIs are included in the EU system of intellectual property rights, legally protecting them against imitation and misuse.

The EU’s intellectual property office (EUIPO) already works together with the Commission on the matter, examining more than 1,100 files since 2018.

Besides examining filings, EUIPO officials also share their knowledge and expertise by organising webinars and conferences. They have recently cooperated with the Commission in expanding GIs implementation outside the EU.

But most of all, EUIPO contributed to the development of GI view, a free online database that aggregates all the registers for geographical indications.

GI view contains data including GI type, priority date, legal status, or the basis of protection concerning all GIs. It is open to national authorities and producer groups.

The producers can also upload extended data in order to maximise information about GIs and directly assist anti-fraud authorities.

In a recent interview with EURACTIV, Julio Laporta, EUIPO’s head of communication, did not comment on rumours about an increased role of the office in dealing with GIs, adding that they are willing to help the Commission on this activity.

“We have demonstrated that we have the expertise, the capacity, and also the muscle to provide them with technological support,” he said, but with the caveat of being involved only in technical aspects.

“The handling of political aspects of GIs is for the Commission,” Laporta concluded.