This article is part of our special report Brave new food world.

MEPs expect an ambitious Commission proposal on the new EU long-term and integrated food policy that ensures safe, quality and affordable foodstuffs to all European citizens but without harming actors in the food supply chain.

There is much curiosity among European Parliament lawmakers over the Farm to Fork (F2F) policy, described in incoming Commission President Ursula von der Leyen’s mission letters as a strategy for sustainable food that will cover every step in the food chain from production to consumption.

The strategy will be coordinated by the Commission’s top vice-president, Frans Timmermans, and will involve Commissioner-designate Stella Kyriakides for health and food safety aspects, as well as Poland’s Janusz Wojciechowski and Lithuania’s youthful Virginijus Sinkevičius for agriculture and seafood products.

However, none of the four Commissioners offered up many details during their Parliament hearings. In Strasbourg, EURACTIV asked MEPs which aspect they would like to focus on during the legislative procedure.

Socialist MEP Isabel Carvalhais, who had the chance to grill Wojciechowski earlier this month, said she would have appreciated knowing more about his long term vision for rural areas and how this vision will be integrated into the F2F strategy.

“Quite frankly, I still hope he may actually come out with more information on this,” the Portuguese lawmaker said, adding that contents of the policy should be on a par with the ambition the catchy definition of the policy entails. 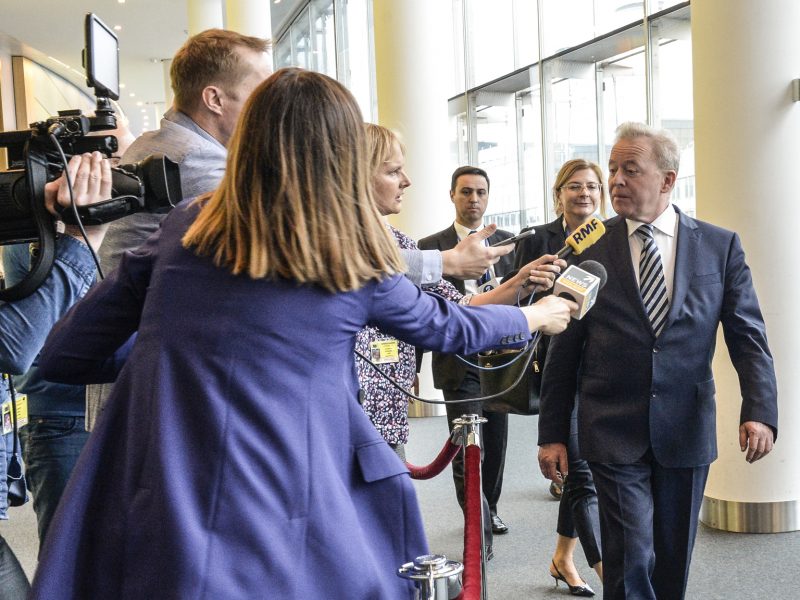 Speaking in his native tongue during the reparatory hearing, Polish Agriculture Commissioner-designate Janusz Wojciechowski delivered a compelling enough performance to persuade MEPs in the European Parliament’s Agriculture Committee (AGRI) to confirm him as the next EU farming boss on Tuesday (8 October).

Christian-democrat MEP Daniel Buda, a vice-president of the Parliament’s Agriculture (AGRI) committee, also expects the Commissioner candidates involved to come up with a certain vision about the way to implement the strategy and on the impact for farmers and the food-producing sectors.

He also recalled that Stella Kyriakides underlined several times in her hearing that the new strategy will be embedded in the EU Green Deal, which is supposed to be the flagship policy of von der Leyen’s Commission.

The other vice-president of the AGRI Committee, Finnish liberal Elsi Katainen, said she was more pleased that the idea of a long-term food strategy was raised rather than she was disappointed by the lack of details at the current stage.

Despite being a newcomer, French MEP Pierre Karleskind had a lightning start in the Parliament, being appointed as vice-chair at the Internal Market Committee and becoming Renew Europe’s coordinator at the Fisheries Committee.

“Ensuring good quality food for Europeans has been neglected by the European Commission for too long. We wait for it to be again at the top of the agenda,” he told EURACTIV.

As regards seafood, he said the F2F strategy should aim at improving tractability on imported fisheries and aquaculture products to make sure they comply with environmental, social and sanitary EU standards.

Karleskind, who’s an oceanographer with a strong background in maritime affairs, added that the new food policy must ensure that European fisheries and aquaculture products are properly valorised with a clear and efficient labelling.

“Consumer protection must be our primary focus and improving traceability and labelling is key to achieve that,” he concluded.

Green MEP Sarah Wiener might be a fresh face in Strasbourg, but she is a famous TV chef in Austria.

Speaking on the sidelines of October’s plenary, she pointed out that the nutritional aspect is quite important, as the F2F should promote healthy and sustainable diets for all.

She expects the strategy will ensure access to land for sustainable food production, but also rebuild climate-resilient and healthy agroecosystems based on agroecology.

A comprehensive EU-strategy which supports the transition to sustainable food systems should also build fairer, shorter and transparent supply chains and put trade in the service of sustainable development, she said.

Keep an eye on farmers

The focus on the environmental sustainability of the food chain was overall welcomed by MEPs. “But we cannot have the farmers as the weak link of this integrated strategy,” said socialist Carvalhais.

According to her, farmers and particularly smallholders must be actively acknowledged for their important role, and the public good they provide needs to be a strong pillar of this strategy.

The experienced lawmaker Buda was on the same page, pointing out that reaching the new strategy’s objectives should not be detrimental for any of the actors involved.

“As a member in AGRI committee, my priority will focus on defending farmers’ position in the strategy,” he said, adding that he had already proposed an own-initiative report on this matter.

In order to fine-tune the EU’s ambitious sustainable objectives, it is necessary to start from the bottom, ensuring that farmers receive guidelines and support to produce food at high standards with less impact on the environment, he concluded.

Renew Europe’s Katainen put the focus on building a sustainable – and profitable – food system as a whole, including forestry and bio-circular economy.

“Food production and food security must be at the core of all this, which is possible only if production is profitable,” she said.