Red wine and steak on the table - all regulated by EU legislation. [SHUTTERSTOCK]

On Monday (1 April), EU lawmakers in the Agriculture Committee voted by 29 votes to 7 against and 1 abstention in favour of the new EU rules for the Common Market Organisation (CMO), the first of three-tranche legislation together forming the post-2020 Common Agricultural Policy (CAP).

However, the approved text will not reach the plenary stage in the current legislative term, so it will be up to the Conference of Presidents of the next Parliament, after the EU elections in May, to decide whether to forward the draft report directly to the plenary or ask the next AGRI Committee to start from scratch instead.

Asked by EURACTIV.com after the vote, the rapporteur of the CMO regulation, Eric Andrieu, urged future MEPs to get back on this report.

“Get on with it, it’s urgent,” the French socialist MEP said, adding that the report sets the political and economic framework for future farming in Europe and there is a need to follow this path.

Contacted by this website in the weeks before the vote, Andrieu expressed his regret that the report will not be scrutinised by the current European Parliament, as there is a clear and urgent need to regulate the EU agricultural markets, according to him.

“In any case, this decision to defer the final plenary decisions on the CAP reports to the next Parliament is another indication that the European Commission’s overall proposal was controversial,” he said.

The compromise amendment number 41, approved on Monday, attracted widespread criticism from animal rights associations and veggie vendors, as it reserved meat-related terms and names “exclusively for edible parts of the animals”.

Veggie or vegan products can no longer be sold under the terms steak, sausage, escalope, burger and hamburger, similar to what happened with plant-based products like soya and tofu, which cannot be labelled by dairy-type names after an EU Court ruling in 2017. 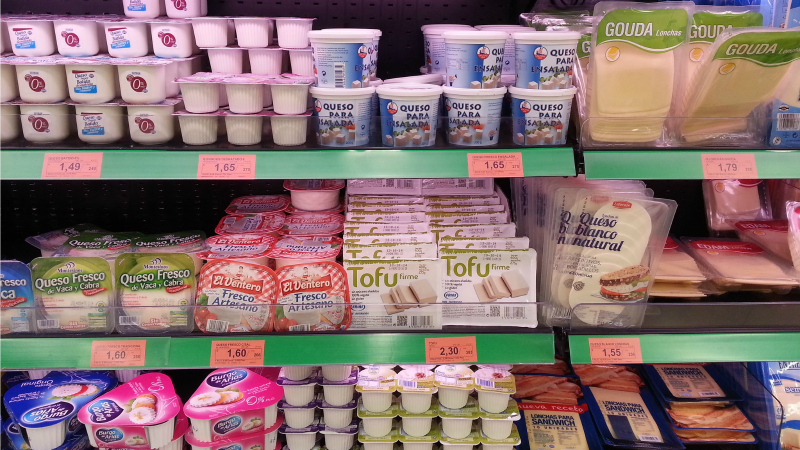 Plant-based products like soya and tofu can no longer be sold with dairy-type names like milk or butter, the European Union’s top court ruled Wednesday (14 June).

The second part of the amendment introduced in the EU law the principle laid down by the Court in 2017, as it makes sure that only products with ‘real’ milk inside can be marketed using the term milk, butter and yoghurt

Andrieu told a press conference after the vote that the new name designation was not the result of lobbying, but more of common sense and consumers’ attitude.

“We felt that the term steak should be used for real steak and other names for new plant-based products,” he said.

But a coalition of environmentalist and animal welfare associations said there is no evidence of consumer confusion, considering inconsistent the arguments put forward to support a stricter regulation on the naming of plant-based food products.

The coalition which included NGOs such as Greenpeace, Birdlife and Eurogroup for Animals, asked MEPs before the vote to reject the amendment as it goes against consumers’ choices for more sustainable food.

The food juggernaut Nestlé seemed to lend a hand to this cause, announcing the launch of a new 100% plant-based burgers the day after the controversial vote, its biggest move yet into the meat-free market.

The lawmakers suggested giving more information to consumers about the wine they’re tasting. In particular, wine labels should show nutrition declarations or at least the product’s energy value and the list of ingredients.

Wine industry wants its products' labelling in the next CAP

The Agri MEPs also proposed to postpone the current vine planting authorisation system until the end of 2050, reviewing its functioning every ten years starting from 2023. The scheme was set up in 2016 and was supposed to end in 2030.

Vitis labrusca species, a type of American grape variety, will not be included in the European wine production but could be replanted in the existing historical vineyards, as long as planted surfaces do not increase. The ban of the American grapes will include six varieties: Noah, Othello, Isabell, Jacquez, Clinton and Herbemont.