Morocco’s Minister of Agriculture, Aziz Akhannouch, called on the EU to unblock a stalled farm trade agreement in order to help the country implement its sole national development strategy. euractiv.com reports from Morocco.

In December 2015, the European Court of Justice (ECJ) invalidated a crucial farm trade deal between the EU and Morocco, claiming that it should exclude the disputed territory of Western Sahara.

The ECJ ruling came as a response to a suit by the separatist Polisario Front, a movement that has been struggling for the independence of the Moroccan-controlled territory (See background).

The move triggered strong reactions in Rabat, which suspended its ties with the EU in response.

In an effort to avoid a diplomatic escalation of the case, a few days later, the Council of the European Union filed an appeal against the bloc’s top court decision. A ruling is expected by the end of 2016.

Akhannouch told euractiv.com that ahead of the ECJ’s next ruling, Morocco and the EU were working “hand in hand” to better address the situation.

“Now we are working on a much more constructive mindset and we are still waiting the very important next decision of the ECJ,” he said.

The minister stressed that despite opening up to other international markets, Rabat still considers the EU as a first market for its agricultural products. “The EU is a paramount partner,” he said, adding that one should not forget that the EU and the North African country have a strong partnership in security, particularly on immigration.

However, he stressed that Rabat was “a kind of astonished” with the decision, and since then he admitted that the bilateral relations “have been witnessing some turmoil and difficult moments”.

“Agriculture associations were very upset, and this can have a major impact on the future trade relations,” Akhannouch noted, adding that until the ultimate decision, the EU-Morocco relations would be inevitably challenged.

Referring to the Council’s appeal, he pointed out that several EU countries had supported Rabat, such as France, Germany, Spain, and Portugal.

“This is a major backup for us. We consider that the agriculture sector in all the regions, including Southern Morocco, is a major development factor we need in order to safeguard and preserve the standards of living of this population […] We have one single national development strategy for the whole country,” the Moroccan official said.

“By promoting that, we will be able to solve a lot of problems, including the illegal immigration one […] Syria is far away and we had drawbacks in Germany. We are 14 kilometers away from Europe. You can imagine how hard Morocco is striving to secure its borders.”

Agriculture is a backbone for Morocco’s economy. The rural population is estimated at 16 million, 80% of which make a living as farmers.

The agricultural sector also represents 35% of employment and 10% of Morocco’s overall exports.

Akhannouch continued, saying that Morocco has excellent relations with Spain and France, with plenty of trade and joint development projects.

“I believe that the Mediterranean countries maybe should start having a different look at the relations with Morocco and Northern Africa.”

The Green Plan and water scarcity

A recent UN Report warned over serious water shortages within 15 years, and Morocco will be severely affected. Access to water for domestic and productive uses (agriculture, industry, and other economic activities) is the first Millennium Development Goal of the United Nations.

A water point in the desert. [Sarantis Michalopoulos]

“We have been focusing for a long time on the so-called ‘damn policy’ to preserve a maximum volume of water and resources, and the irrigated perimeter that we have safeguarded and promoted is 1.6 million hectares,” the minister said, emphasizing the role of the so-called “Green Plan”.

Launched in 2008, Morocco’s Green Plan is a national strategy whose main objective is to improve the agricultural environment for farmers.

“[Via the Green Plan] we launched the localized irrigation system and hopefully by 2020, we wish to reach approximately 550.000 hectares of irrigated areas. And this allows not only water saving but also the enhancement and improvement of the overall production,” the official noted, adding that farmers were trained on the irrigation sector.

“Between 2008 and 2015, the average growth rate of the agriculture GDP was 6.5% […] this how we witness a 84% booming of olives production and citrus fruits have reached 2 million tonnes, representing a 65% increase.”

Investments and the “King’s land”

Asked about private investors’ concerns over the fact that Morocco’s King Mohammed VI holds a significant amount of agricultural land, he said that it was “quite fake information”.

“Initially, it’s a longstanding tradition and even the late father Hassan II was quite interested in agriculture.”

“He paved the way and he was a role model for the farmers. Moroccan farmers take great pride in seeing his majesty so interested in the agriculture sector. He is not only providing assistance to farmers but also showing the way,” Akhannouch insisted, pointing out that an increasing number of foreign investors from France, Spain, Italy, as well as Middle East have put money into Morocco’s agriculture sector.

Surviving in the desert

Smara is a city in Western Sahara with a population estimated at 42,056, which is faced with a number of natural obstacles.

The main difficulty is the irrigation as the underground water is quite rare. 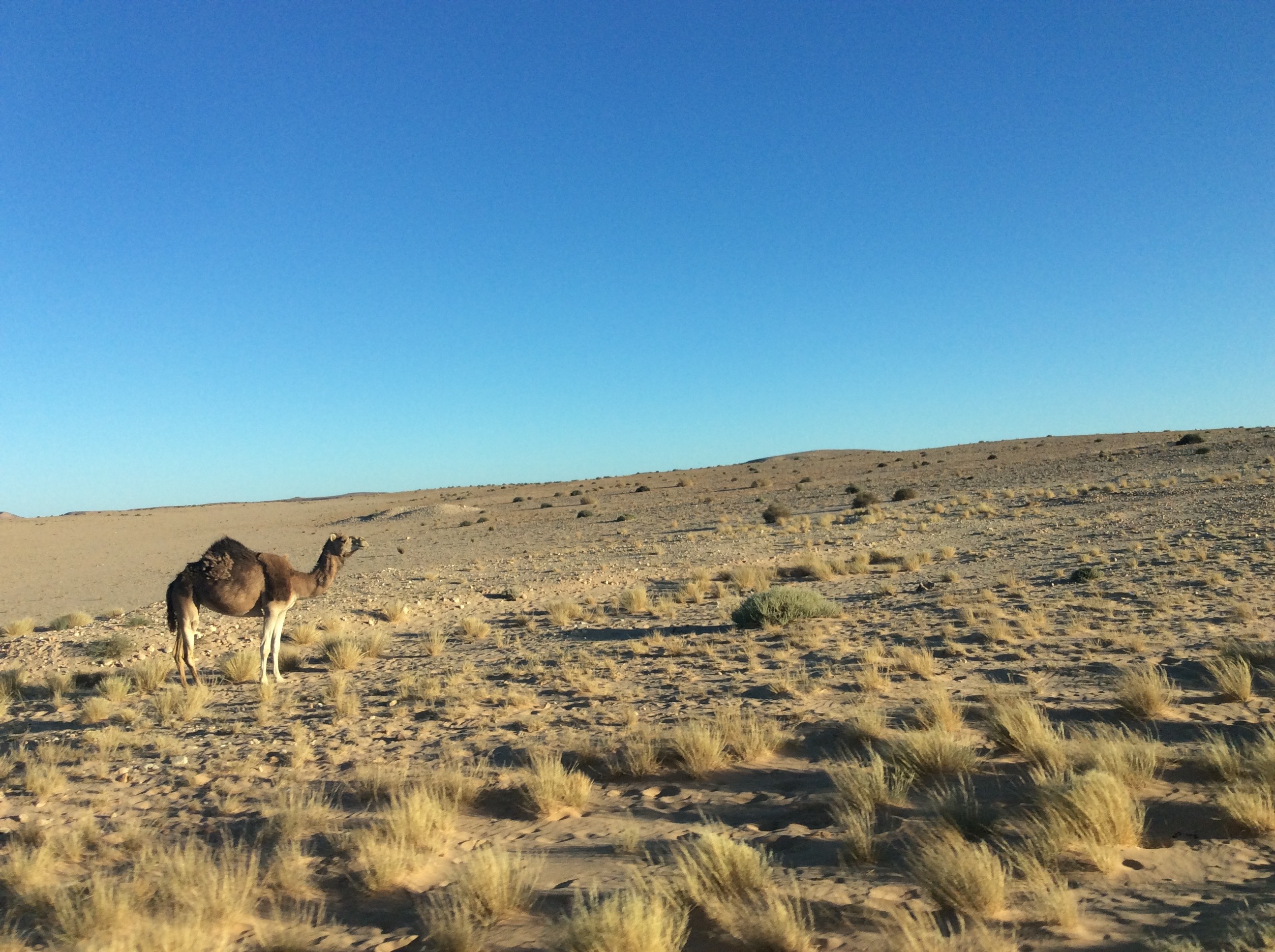 Camels are common to the Western Sahara. [Sarantis Michalopoulos]

Morocco has heavily invested in infrastructure of irrigation mainly through the construction of artificial underground source of water, to ensure that all animals can have water especially in drought seasons.

Associations for camels and goats have already been established, and their objective is the central management of livestock and to allow access to water points.

Laayoune is the largest city in the disputed territory of Western Sahara. Its main trade activity is fishing.

For Akhannouch, sustainability is a fundamental concern for the region’s fisheries. “Any fishing policy cannot be viable if it does not integrate sustainable resource management”, he told EURACTIV.

Halieutis set management plans for small pelagic species, large crustaceans, hake, shrimp, bluefin tuna and swordfish. “All those plans helped us cover 93% of the catches of the species in 2015,” the minister stressed.

Currently, 31 processing plants are settled in Laayoune. There are also 883 small boats fishing in the region, which shows the importance of the fisheries sector for “small players”.

The Western Sahara is a disputed territory in the Maghreb region of North Africa, bordered by Morocco to the north, Algeria to the extreme northeast, Mauritania to the east and south, and the Atlantic Ocean to the west. Its surface area amounts to 266,000 square kilometres.

It is one of the most sparsely populated territories in the world, mainly consisting of desert flatlands. The population is estimated at just over 500,000.

Occupied by Spain in the late 19th century, the Western Sahara has been on the United Nations list of non-self-governing territories since 1963 after a Moroccan demand.

In 1965, the UN General Assembly adopted its first resolution on Western Sahara, asking Spain to decolonise the territory. One year later, a new resolution was passed by the General Assembly requesting that a referendum be held by Spain on self-determination.

A war erupted between those countries and the Sahrawi national liberation movement, the Polisario Front, which proclaimed the Sahrawi Arab Democratic Republic (SADR) with a government-in-exile in Algeria. Mauritania withdrew in 1979, and Morocco eventually secured effective control of most of the territory, including all the major cities and natural resources.

Since a UN-sponsored ceasefire agreement in 1991, two thirds of the territory of Western Sahara has been controlled by Morocco and the remainder by the SADR, strongly backed by Algeria.

Internationally, countries such as the United States and Russia have taken a generally ambiguous and neutral position on each side's claims, and have pressed both parties to agree on a peaceful resolution.

Both Morocco and Polisario have sought to boost their claims by accumulating formal recognition, essentially from African, Asian, and Latin American states in the developing world.