There is a clear connection between groundwater pollution and the agricultural use of the affected areas based on data from 2012 to 2016, according to a recent study by the German Institute for Economic Research (DIW) published on Wednesday (26 February).

In agricultural regions, researchers found not only more frequent, but also significantly higher levels of pollution, which exceed the permitted maximum value of 50 milligrams per litre by up to seven times.

The fact that about one-third of the water measuring points in agricultural areas are above the limit is nothing new.

In Germany, the debate about the fact that the government only includes measured values from the agricultural sector in its nitrate report which it sends to Brussels every four years has been heating up. Besides, it is known that not all EU member states adhere to the rule of only transmitting measuring points from agriculture, as many report lower nitrate levels from their forest and grassland areas.

The study is novel in the sense that it is the first systematic study of the relationship between land use and nitrate pollution of groundwater in Germany.

The pig is to blame

Agriculture is not solely responsible for the German nitrate problem.

About 50% of the nitrogen compounds in the soil are attributable to the sector, but what’s left comes in equal parts from industry, the transport sector and private households. Besides, local conditions such as the speed of water flow or soil properties can also cause nitrate to be concentrated in certain places.

The fact that nitrate could also run into the groundwater from the sewage pipes of residential areas, as some people claim, has only a very minor influence, explained Falk Hilliges, expert for groundwater protection at Germany’s Environment Agency. “From our point of view, this plays only a marginal role in the overall view,” he said. 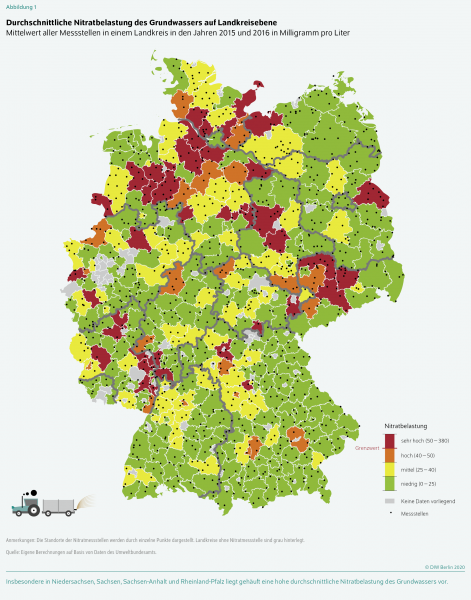 This means that the agriculture industry remains the largest contributor to the nitrate surplus.

Yet, the concentration of nitrate is particularly high in those federal states in which pigs are being fattened, according to the DIW study. The high levels are caused by the manure for these animals, which is being spread on the fields and converted in the soil by biochemical processes into nitrate, which in turn accumulates in ground and surface water.

According to the researchers’ findings, a larger density of the pig population is, therefore, also associated with increased nitrate pollution. In contrast, no such correlation could be found for cattle and sheep.

Previous studies had not examined the factor of animal density.

Will the European Commission drop its lawsuit against Germany?

Since groundwater renews itself only very slowly, the measured nitrate levels are the result of fertilisation practices that in some cases took place years ago. However, although Germany has significantly tightened its fertilisation regulations in recent years and introduced a fertilisation requirement assessment and material flow analysis for the first time in 2017, the levels have nonetheless been stagnating for years.

In order to avert the European Commission’s ongoing infringement proceedings, which could end up with possible fines, the ministry of agriculture and the environment have been working feverishly on an amendment to the fertiliser regulation in recent months and submitted it to the Commission in mid-February.

If the Bundesrat approves the draft on 3 April, the new, significantly stricter regulation could come into force this summer.

Only then will the Commission decide whether to discontinue the infringement proceedings or not, a spokeswoman for the newspaper agrarheute confirmed.

Other member states have also successfully reduced their nitrate surplus in recent years.

Denmark, for example, has reduced its nitrogen surplus by 37% between 1980 and 2007 after it introduced stricter rules and introduced a so-called fertiliser register.

In the Netherlands, too, demand for nitrogen fertilisers fell by about half between 1990 and 2012, when an upper limit on fertilisation was introduced.

In any case, the reduction of nitrate did not happen overnight, according to Greta Sundermann, one of the authors of the DIW study.

“Other countries have also needed 20 to 30 years,” she added.