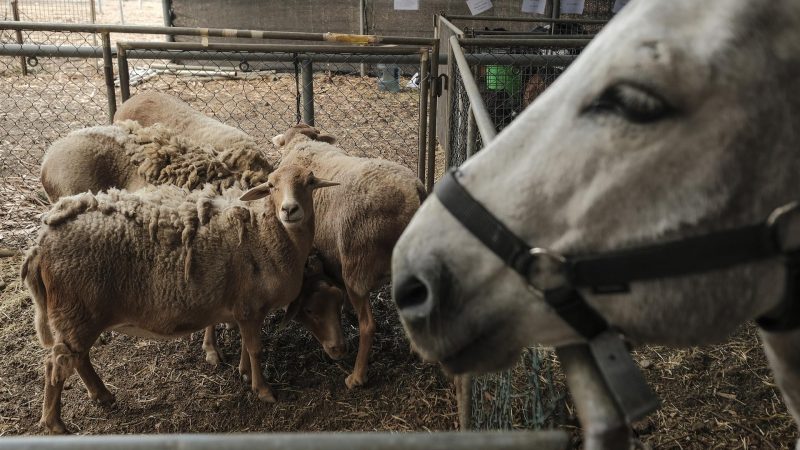 Now, some 130 animals are sheltered under a makeshift waterproof raffia roof to protect them from the sun and streams of ash released by the volcano. The animals have been put in separate cages according to their species and owners. [EFE/Ángel Medina G.]

The eruption of the Cumbre Vieja volcano on the Spanish island of La Palma is not only destroying some of the most fertile agricultural land in the Canary Islands, but is also threatening livestock essential for the survival of artisan dairies and farmers. EURACTIV’s partner EFE reports.

While residents were evacuated from their homes after streams of lava rapidly descended from the volcano, ranchers quickly brought their animals to safety in what resembled Noah’s Arc.

Suddenly, all goats, sheep, chickens, pigs and rabbits from neighboring towns of El Paso were brought to Las Canales, where they would be safe from the lava.

The animals arrived at the shelter nervous, not only because of the sound of the explosions and being taken out of their natural habitat, but because many of them had already been feeling unsettled for some time.

Volcanologists had warned local residents of the Cumbre Vieja to observe their animals’ behavior as it could be a sign that something was about to happen on a seismological level.

Now, some 130 animals are sheltered under a makeshift waterproof raffia roof to protect them from the sun and streams of ash released by the volcano. The animals have been put in separate cages according to their species and owners.

“Luckily, we were able to foresee that this could happen and so we knocked on all doors of neighborhoods in the municipality warning of what could happen. We were also in contact with transporters, so that in the same hour that the eruption happened, we had enough time to pick up the animals and move them,” Gustavo Concepción, councilor of Rural Development of El Paso, told EFE.

The animals, which are an important part of tradition for many families, are now safe and cared for by their owners and volunteers that are easing the pressure on farmers who have lost their homes and land.

“The livestock in La Palma is a family tradition, many people not only have it as a complement to their economy, but the animals are also their life. We are talking about family traditions that go back many years and passed on from from parents to children,” Concepción said. “A volcano is not going to change that.”