All forms of pesticide treatment, except for so-called 'biocontrol' methods, cannot be applied in non-treatment zones, meaning that farmers who use phytosanitary products will face the same constraints, regardless of whether they use such products intensively or just occasionally.  [SHUTTERSTOCK]

This article is part of our special report European winemakers grapple with environmental questions.

It is 5:30 in August, and the sun is shining on the other side of the Saône valley. Everyone in France is on holiday but Bernard, a winegrower in the Beaujolais region, is already driving his tractor.

Without wind, it is the ideal time to “sulphate”, as the elders say. It is a question of spraying the vineyard with various so-called ‘phytosanitary’ or plant protection products. 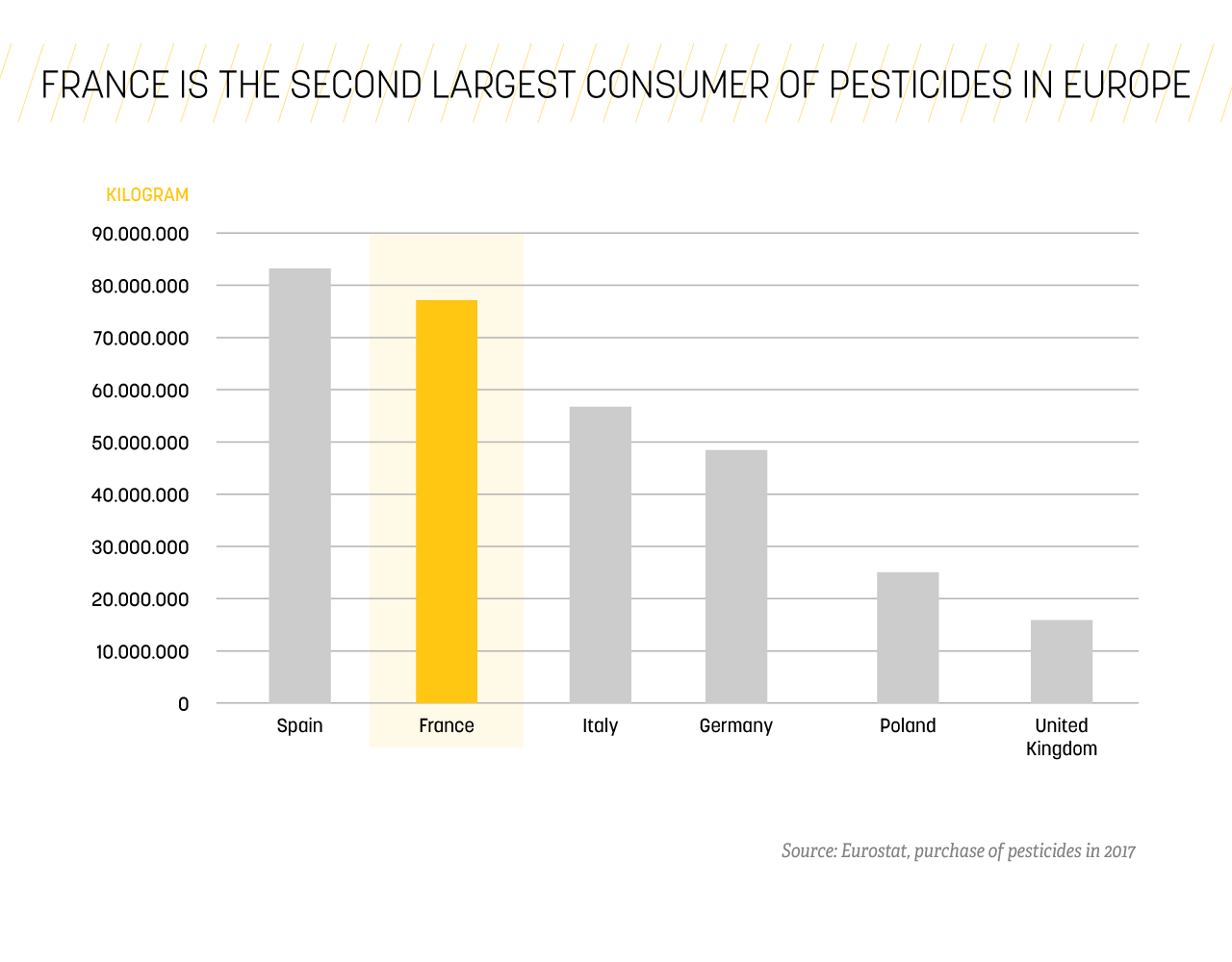 This year, this will be one of the twenty ‘sprayings’ the winegrower undertakes for each of his plots. France’s vineyards are the country’s biggest consumers of plant protection products, which include the heavily-used fungicides, insecticides and herbicides.

Champagne ranked the highest as it necessitated 25.6% of the sprays in 2016, ahead of wines from Burgundy, the Gers and Beaujolais regions. This is linked to the plant’s exceptional fragility and sensitivity to the development of fungi, aphids or bacteria.

Although viticulture represents 3% of France’s agricultural land, the sector spreads 20% of the country’s fungicides.

However, it also represents 15% of French agricultural production in value terms, mainly due to the prices of certain wines, such as Bordeaux, Champagne and Burgundy. 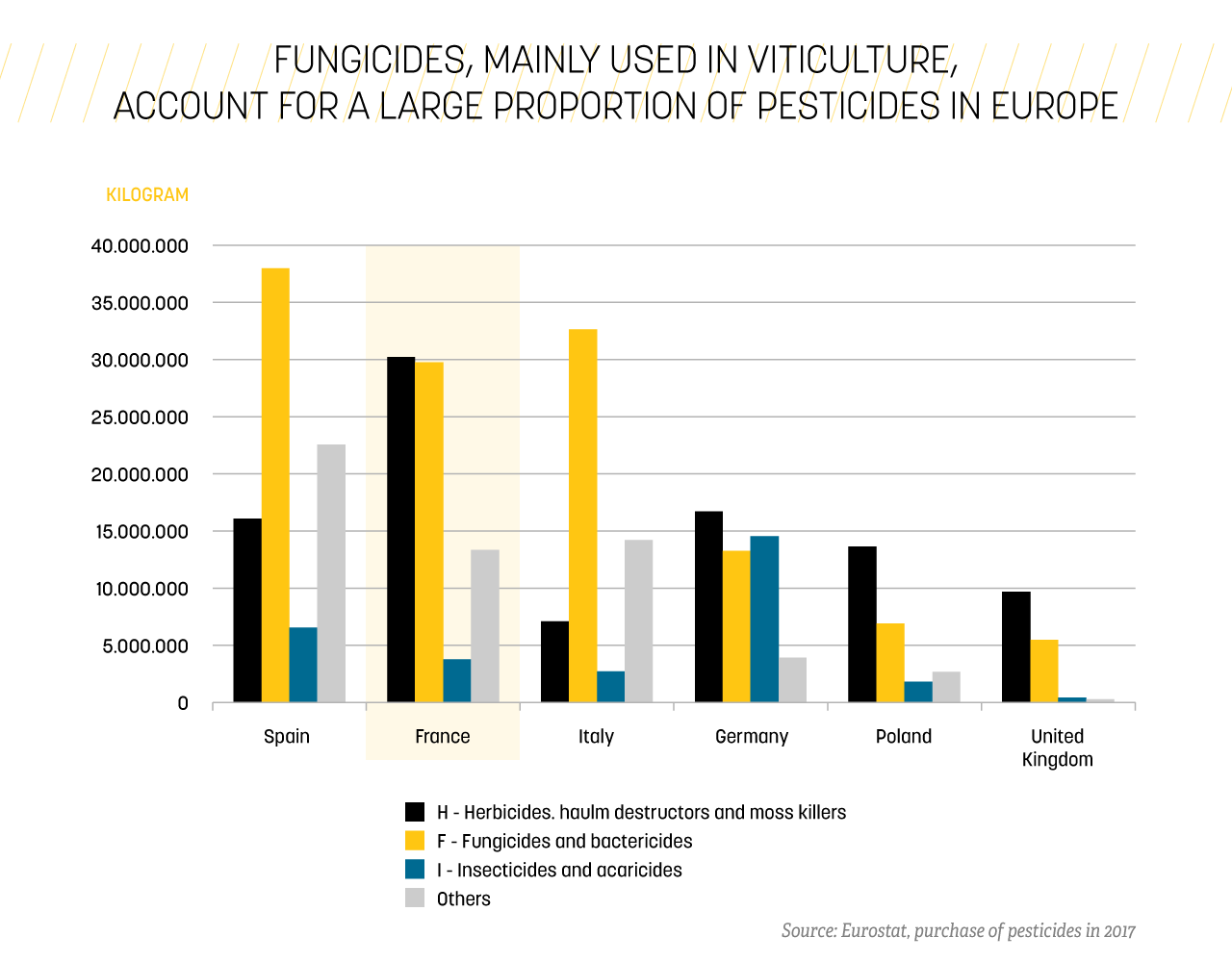 According to a study by the institute Rhodanien located in the French commune of Orange, the pesticides found in wine were significantly below the maximum authorised limits calculated for grapes.

Sulphite or sulphur dioxide, the main chemical residue found in wine suspected to cause migraines, is added after the harvest to limit the spread of certain micro-organisms and oxidation.

However, the molecules are still spread in nature, thus affecting fauna and flora, and killing insects, including bees. They also impact human beings by increasing the rates of endocrine disrupters and cancers.

This is a growing challenge for local communities, which are concerned about the consequences for the health of their inhabitants. Local communities are now calling for minimum areas of land in certain areas near their homes not to be spread with pesticides.

Often spread out around residential or even tourist villages, vineyards are particularly concerned by this issue.

Under the directive establishing a framework to achieve the sustainable use of pesticides, the wine industry has undertaken to reduce the use of plant protection products by 50%, in particular by changing its spraying methods.

A so-called high environmental value (HVE) label has also been introduced and should theoretically affect half of all French farms in 2025.

But the label, created by the French government, is still not so well-known by consumers, distributors or even producers.

The constraints are much less Draconian than those of organic farming but are of real interest in reducing inputs. For example, vine grassing makes it possible to reduce the spreading of weedkillers.

“The Terra Vitis certification will include the HVE approach from 2020, which will add several farms. The problem is that these certifications rely on studies and are expensive. This means that they are not suitable for small farms,” explained French MEP Irène Tolleret of the Renew group. Tolleret is also a Pic-Saint-Loup winegrower.

The objective of including half of the 840,000 hectares of French vines in the label within six years, therefore, seems ambitious. For the moment, organic vines only represent 61,000 hectares, and Terra Vitis certification 11,000, which amounts to less than 10% of French vineyards.

In addition to organic farming, new environmental initiatives are emerging, particularly in Bordeaux and Champagne, France’s largest wine regions. And particularly in light of climate change, which requires grape varieties and water management to be adapted to rising temperatures.