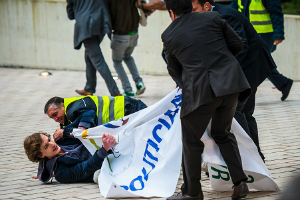 Three environmental demonstrators were detained on Monday (24 June) for breaching security at the Luxembourg building where EU agriculture and foreign ministers were preparing to meet. EURACTIV reports from Luxembourg.

The demonstrators, whom security officers declined to identify, were targeting negotiators from the three EU institutions who were arriving for talks on the future of the Common Agricultural Policy (CAP).

The three were removed from the Kirchberg conference centre without incident and were expected to be release later in the day, police officers at the scene said. Access to the building during the meetings was available only to accredited staff and journalists.

Some 30 people representing environmental groups and farm organisations gathered outside as agriculture ministers began arriving for separate meetings. Foreign ministers were holding meetings in the same building to discuss Syria as well as EU policies towards Ukraine and Belarus.

But it was the CAP meetings that drew attention outside.

“We would like to remind the decision-makers we were promised a green, fair and local CAP and it looks like we are going to have business as usual,” said Stephanie Roth, a campaigner for Agriculture and Rural Convention, or ARC2020, who was among those demonstrating outside the meeting hall in Luxembourg’s European quarter.

Others, including the French organisation Groupe Pac 2013, were pressing arriving ministers to strengthen environmental rules in the CAP proposals.

At the same time, organisers from the Copa-Cogeca, which represents farmers and farm cooperatives, urged the negotiators for a final agreement after three months of negotiations between the Parliament, national farm ministers and the European Commission.

Agriculture Commissioner Dacian Ciolo? told journalists Monday morning that following ministerial meetings on Sunday, he was confident that “a compromise acceptable to everyone” would emerge this week.

Simon Conveney, the Irish farm minister who is chairing the three-party talks, said there were 25 issues that needed to be resolved before Wednesday (26 June), when he plans to present a compromise CAP proposal to the European Parliament in Brussels.

“European farmers expect a result this week and we are going to do everything we can to deliver that for them,” added Coveney, who said there have been some 40 rounds of CAP talks since the European Parliament adopted in March a four-part set of legislation for the 2014-2020 CAP.

The 2014-2020 CAP has been the target of high-pressure lobbying in the 21 months since Ciolo? unveiled a “greener” policy that would impose new conservation rules on both farmers and member states.

The farm-support programme is already a year off course and negotiators conceded there is no guarantee a deal will be worked out before Ireland hands over the six-month presidency of the EU Council to Lithuania on 1 July.

The debate and vote on the Common Agricultural Policy (CAP) is a historic one for the European Parliament.

With powers it acquired under the 2009 Lisbon Treaty, lawmakers now have a direct say in shaping the future of farm policy.

The CAP turns 51 in 2013 and remains the most expensive EU programme. But it has fallen from more than 70% of the budget in 1962 to less than 40% for 2014-2020, under the draft budget approved by the EU Council in February. The Lisbon Treaty also gave the Parliament new powers over spending.

Despite its monolithic political and fiscal importance for the EU, agriculture is a small part of the economy: it accounts for 1.7% of GDP and 4.6% of employment, OECD figures show. Agro-food products were 6.5% of exports in 2009.