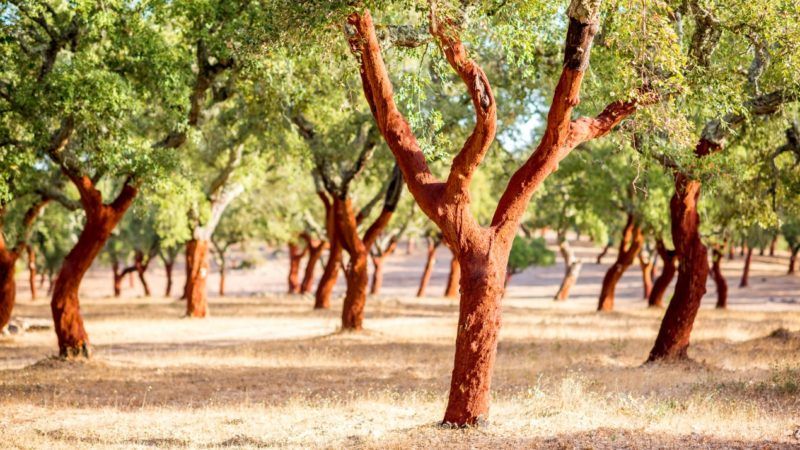 Portugal holds around 70% of the world market in cork. [RossHelen/Shutterstock]

Portugal has come a long way in recent years to become the world leader in cork exports. But it is now also at the cutting edge of developing technology, competitiveness and industrial dynamism, which has improved its expertise in innovation and human resources, Ferreira said.

The cork oak is Portugal’s second national forest species in terms of area, covering some 716,000 hectares, mainly in the south of the country. This area has been increasing gradually over time. Portugal has more land dedicated to cork oaks than any other country in the world.

Ferreira said this has been encouraged by international campaigns such as Intercork III, financed by European funding to promote the use of cork stoppers in ten different markets (USA, France, Germany, Italy, China, Brazil, Spain, Sweden, Denmark and the UK).

The campaign also had the backing of COMPETE 2020 under the scope of the Collective Actions Support System (SIAC), which involved an eligible investment of €7.8 million. This in turn resulted in a European Regional Development Fund (ERDF) incentive of €6.6 million.

The APCOR chairman said that Portugal stood out as a country that exported added value products, particularly cork wine stoppers, where its market share is about 70%.

“Today, for every one euro of cork that is exported, 85 cents of added value stays in our country,” he said.

Association figures for 2016 (the latest available), showed that France is the main Portuguese market with more than 19% of the total value of the exports, worth just under €178.5 million.

Ferreira expects these figures to increase in 2017, as the industry saw an increase of around 4% in exports up to September compared with the previous year, he added.

After the export of cork stoppers comes building materials, with a market share of roughly 23%. Materials for other applications such as in the transport, footwear and textile industries take around 5% of the market share.

Between 2007 and 2014, the instruments available under the Portuguese National Strategic Reference Framework were the main supports available for cork industry investments, according to a sector study drawn up by APCOR.

During this period, 184 projects were approved involving eligible investments of around €146 million, developed by cork industry companies, other entities with links to the industry or companies from other sectors, but whose projects could apply to the cork industry or involved the use of cork. These projects corresponded to 1.3% of the total number of projects and 1.4% of the national investment, the same source said.

APCOR said there were 677 companies in Portugal operating in the cork sector, giving jobs to 8,324 workers, with an average wage of €760 per month.