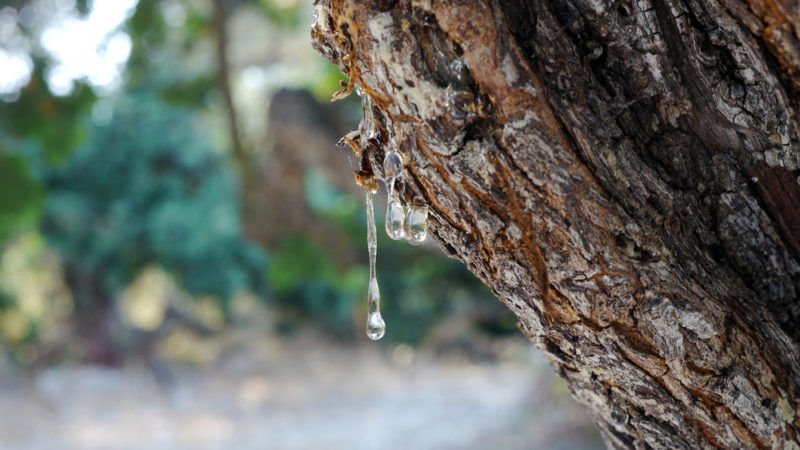 Mastic gum on a tree on Chios, Greece. [Shutterstock]

Unexpected summer rainfall, combined with a growing number of thefts, is jeopardising the production of the main ingredient of Greece’s famous Mastiha liqueur both in quality and quantity.

Mastiha, which is produced on the Greek island of Chios using a resin from the mastiha tree, has protected designation of origin status in the European Union, and Greece exports around 40-45 tonnes of it to the rest of Europe every year.

But a significant part of the production of the mastiha resin will run into difficulties this year and will need to be cleaned in order to be sold, President of the Association of Mastiha Producers Giorgos Toumpos told EURACTIV.com.

“Some production was lost while another part was downgraded on the quality level as it got wet,” he said.

Normally, there is no summer rainfall on the island. Farmers usually expect the first rainfalls of the year after 15 September. Colder weather in the summer creates a massive problem for mastiha cultivation.

In this case, the rainfall took place during the production process, when the product was in the development phase.

Thefts on the up

In addition to the unfavourable weather conditions, mastiha growers are also faced with an increasing number of crop thefts mainly during the night.

Toumpos said producers are concerned about it but insisted that the thefts are not a new phenomenon.

“People are nowadays more vulnerable due to the crisis […] the less one has, the more one values the things needed for one’s livelihood,” he noted, adding that the phenomenon should nevertheless definitely be addressed.