The updated renewable energy directive was not meant to support European farmers, but rather promote green energy as long as it complies with sustainability criteria, a European Commission official has said.

“It is clear, on the other hand, that the directive has positive effects on domestically produced renewable energy, as well as on energy security,” he told participants at an event organised by EURACTIV.com last week (5 December).

Van Steen’s comment came in reply to Indonesia’s former vice-minister for trade and agriculture Bayu Krisnamurthi, who asked why REDII was specifically designed to support European farmers but not third countries’ farmers too.

The EU official’s explanation came as a surprise to biofuel campaigners.

“When the first RED was put in place in 2009, rural development was the first driver,” said Stefan Schreiber, the Head of Business Development at German biofuel company Verbio.

The intention at the time was to “hit three birds with one stone”, namely rural development granting support to farmers, independence of supply and climate mitigation. “Climate was only the third driver and it evolved becoming the number one,” he added, highlighting that the policy still needs to support farmers in order to meet the CAP rotation requirements started together with the first RED.

Asked by EURACTIV if the opinion of the Commission’s agriculture directorate was taken into account during the consultation, van Steen said: “This is not only a DG Energy strategy but a Commission policy. Of course, we consulted DG Agri.”

“There is a number of instruments specifically aimed at European agriculture, but this is a piece of legislation that aims to promote renewable energy no matter of where this energy is produced,” he added.

The fear that DG Agri was not properly consulted in biofuels talks was recently expressed by Pekka Pesonen, the chief of EU farmers union and cooperatives (Copa-Cogeca).

“We are quite worried about the trend that DG Agri has been pushed aside in many agriculture-related questions, such as the future of biofuels,” Pesonen said last July. 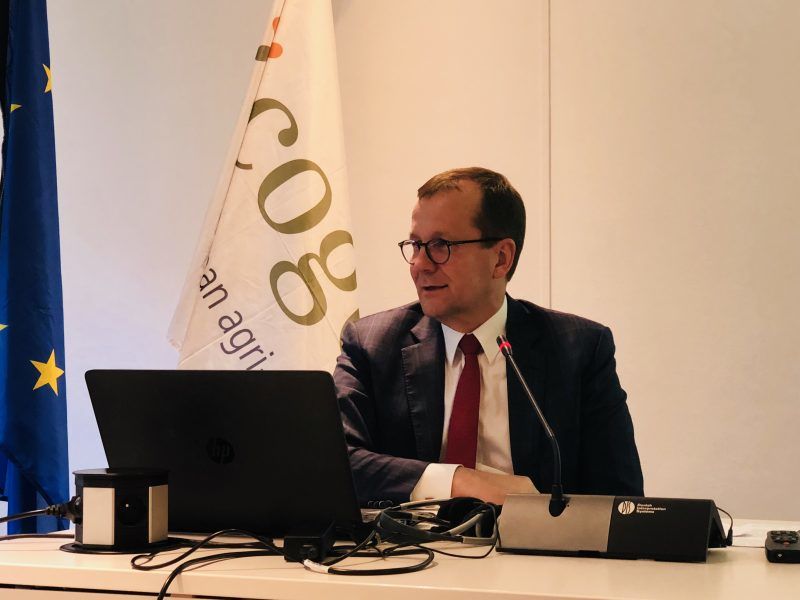 In his final remarks, van Steen took the floor again to clarify that RED II supports renewables for a number of reasons, including to promote rural development.

He also added that although RED is not specifically designed to support farmers, this could be one of the side-effects, “which is a good thing.”

Although EU ministers adopted the text of the new Renewable Energy Directive on 4 December, the definition of low or high-risks of indirect land use change (iLUC) is now putting pressure on the Commission.

When the European Parliament and EU ministers stroke a deal in June on the new comprehensive sustainable criteria for biofuels production, they decided to postpone the definition of the low iLUC risk factors.

Since the EU co-legislators didn’t find a compromise on the issue at that time, they asked the European Commission to set up the certification process for assessing iLUC risks, making in a few words a distinction between first-generation biofuels through a delegated act.

The Commission is currently preparing this delegated act. EURACTIV understands the EU executive wants to adopt a balanced approach to an area in which science and technology evolve very fast.

The ultimate position of the EU executive on the issue is still unclear considering that the EU ambassadors in Malaysia and Indonesia have ensured the local governments that the EU market is “open to palm oil”.

Indonesia and Malaysia, the world’s top producers of palm oil, have reacted strongly to EU intention to phase-out palm oil and even threatened with trade retaliations. Several participants pointed out that the delegated act should not offer an easy back door to controversial biofuels with high iLUC risks, such as the ones based on palm oil and soy feedstocks.

Among the risks that iLUC risk criteria definition will present, there is also the monitoring of the criteria implementation in Europe and in third countries, as well as the challenge of the traceability for biofuels imported.

“We will not able to satisfy everybody, but we’re producing something which is based on the best possible information we have,” Hans van Steen said.

He announced that the Commission wants to have the act ready by the end of January next year and present it around 1 February 2019 in order for the EU Parliament to look through it before the end of its mandate.

Luc Vernet from Farm Europe, a think-tank specialised in agricultural issues, said that all experts agree on the fact that palm oil, and to a less extent soy, present high iLUC risks and should fall under this category.

“Now the risk is to have a very weak definition of low iLUC that would offer a backdoor for high iLUC risk feedstocks. The challenge is to have a low iLUC category offering all the guarantees that the supply chain is ‘deforestation-free’ directly and indirectly,” Vernet told EURACTIV.

The French expert added this could be achieved not only by focusing on plantation or farm level but also taking into account the deforestation trend at the national level.

“It would not be consistent with the iLUC concept if feedstocks could be certified as low iLUC in a context of deforestation taking place in a specific country,” he noted.

For Laura Buffet from the NGO Transport and Environment, sustainable biofuels are not the ones that use agricultural land to be grown.

“However, considering that we currently have a framework that still allows it we have to deal with it. The delegated act could end the support toward highest-emitting biofuels and we think at least palm oil and soy-based biodiesel should be in this category,” she said.