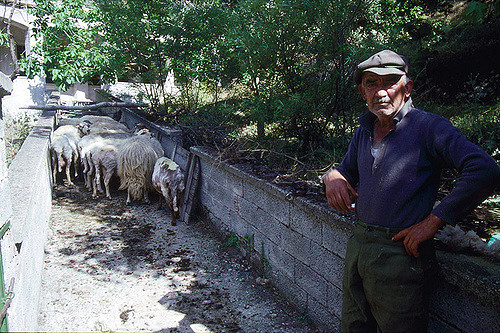 A reluctance to innovate among ageing Greek farmers will be a key challenge for implementing EU rural development programmes there under the new Common Agricultural Policy, EURACTIV Greece reports.

€5.9 billion of public money is earmarked for Greece’s farming sector under the new Rural Development Pillar (RDP) of the reformed CAP.

But in order to take advantage of the new funding provided by the RDP, Greek farmers’ mindsets need to change, analysts say.

44.1% of the Greek population lives in rural areas, which represent 82.2% of the country’s total land. Agriculture accounts for 13.2% of total employment in Greece, while the food processing industry represents a mere 3.3%, according to the European Commission.

This makes agriculture a key sector for the country’s struggling economy.

Fotis Xatzipapadopoulos, from Gaia Epixeirein, a consultancy which brings together farmers, the IT sector and banking, told EURACTIV Greece that the main obstacle for innovation in agriculture is the mentality of Greek farmers.

“We need to encourage a new culture and the EU’s rural development programme can help in this direction through the consultancy supply networks funded by it,” Xatzipapadopoulos said.

According to the agriculture specialist, the RDP will allow Greek farmers to get access to quality advice in order to make the right decisions and make the best use of their land.

“When a farmer goes bankrupt due to a wrong decision, he then turns to innovation as a solution to the deadlock.”

For Xatzipapadopoulos, precision farming technologies, which are being rolled out in the US and some advanced Western European countries, cannot be applied in Greece because of the different farming circumstances there.

“In the US, farm size is quite large and therefore crops have great variability,” he said, noting that modern tools such as satellite technology, sensors or drones would not be affordable for many Greek smaller holders.

“A cost saving of 5% [thanks to precision farming] in a large farm can justify the farmer’s capital investment in a modernised tractor,” he said. “For small farms, the producer will never get his money back.”

The use of precision farming technologies without advice on how to analyse the data would offer nothing to a farmer, he claims.

“The farmer needs to measure, make a soil analysis, take the results which will be examined by a specialist and then be consulted on how to make the best use of the results on a farm,” he said, adding that “only through fact-based farming will farmers reduce the cost of the inputs and increase their productivity”.

“In Greece there is not such a mentality. Farmers usually get tips for cultivation when they purchase for instance fertilisers without a previous soil analysis. There must be a qualified agronomist to do that.”

Xatzipapadopoulos complained that in Greece there was not a mindset for innovation, which results in a major shortage of specialised agronomists.

The only possibility for precision farming to be applied in Greece is through “large-scale projects with a high number of farmer groups who will share the cost”.

The myth of drones

The use of drones in Greek farming is merely a trend, according to Panagiotis Ilias, an analyst at Neuropublic, an IT company.

“In the US a farmer can afford to buy a drone as well as pay specialists to analyse the collected data,” he said, adding that a €15,000 purchase for a Greek farmer is not affordable.

The data collected by a drone has no value for a Greek farmer, as without analysis it can not be translated into advice.

“In Greece, the mentality that dominates is just to sell drones […] not to help the farmer produce and apply precision farming,” he noted.

Markos Leggas is a young farmer and president of Pegasus Cooperative, specialising in grapes.

Commenting on the new RDP for Greece, he said there were many opportunities for farmers to take a step toward innovation-driven practices, but a number of factors were holding them back.

“[A] Greek farmer has not realised yet that in four years time ― meaning tomorrow ― he will not be granted subsidies in the same way as he did in the past,” Leggas said.

Young farmers are more open to innovation, he stressed, but sometimes family farms can be a huge hindrance.

“In family farms, the older generations do not let young people take the lead. They are suspicious when it comes to something new,” he said.

He noted there was a shortage of specialised workforce in new agriculture technologies ― including agronomists, surveyors, engineers, and data analysts ― as many crisis-hit young people have migrated abroad.

SPECIAL REPORT / Faced with a raw materials scarcity due to climate change, food and drink giants have turned to a sustainable management in order to protect the environment and ensure their future viability.

In a sign of Greece’s struggling agriculture market, Legga’s company only exports to supermarkets in England through sustainable sourcing projects.

“There are specific sustainability rules that needs to be followed otherwise the supermarkets terminate the cooperation,” he said.