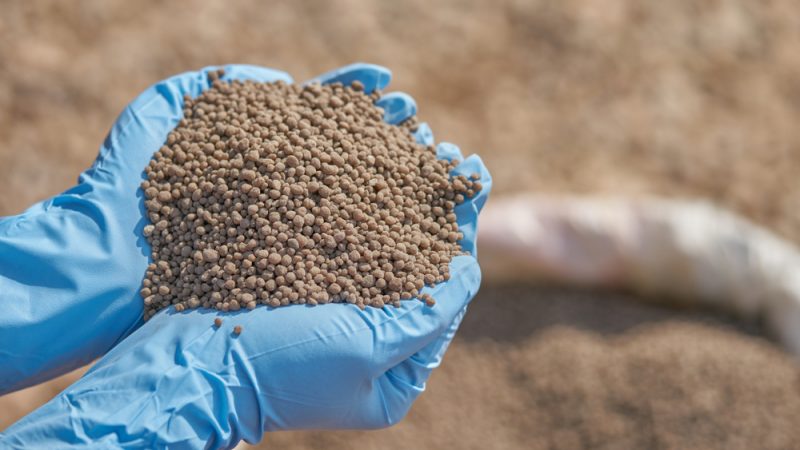 Cadmium is a naturally occurring soft metal, chemically similar to zinc and mercury, which can be found in rock phosphate, a key element in the manufacture of phosphate mineral fertilisers. [SHUTTERSTOCK]

Stakeholders are calling on the European Commission to stop prioritising home-grown phosphates high in cancer-causing cadmium over imports of cleaner products from non-EU countries, but others warn that this risks sacrificing EU autonomy.

Cadmium is a naturally occurring soft metal, chemically similar to zinc and mercury, which can be found in rock phosphate, a key element in the manufacture of phosphate mineral fertilisers.

The metal has been classified by the International Agency for Research on Cancer (IARC) as a group one carcinogen that affects the liver, kidney and bones.

Cadmium accumulates in the soil, where it is taken up by crops, especially certain food groups such as vegetables, nuts, potatoes and meat.

According to soil expert and scientist Ettore Capri, director of the OPERA Research Centre, cadmium’s cancer-causing properties have been known for many years and it is clear that it poses a threat both to human and environmental health, especially that of vulnerable groups such as children.

Despite this risk, there is a low level of awareness of cadmium exposure among consumers, according to Floriana Cimmarusti, secretary-general of Safe Food Advocacy Europe (SAFE).

“Even if you have to label that a vegetable has very low cadmium, the average consumer wouldn’t understand what it means,” she said, pointing out that, as such, it is “not enough” to inform the consumer.

Instead, she suggested, it would be best to tackle the problem at the source by rewarding farmers who limit the use of cadmium in their fields.

Put your money where your mouth is

A key way to achieve this would be to focus on using products with low content of cadmium, Capri highlighted, adding that there was clear evidence of the effectiveness of such a move.

According to Pascal Michaux, secretary-general of global campaign group Safer Phosphates, there is enough low-cadmium phosphate to meet demand but only if the EU chooses to prioritise it.

“There are enough sources of phosphate rock with low calcium content,” he said, pointing out that the cost to producers to remove cadmium from phosphates is relatively low.

However, some of the cleanest sources of cadmium are sourced outside the EU, he explained, pointing to Finland, Canada, the US, Russia, and Kazakhstan, among others.

Unlike EU producers, these producers are hit with heavy import charges of up to 6.5%, he said.

This creates an “awkward” situation whereby the EU is subsidising more harmful, cadmium laden phosphates while discouraging the import of cleaner products.

“We should stop subsidising the producers with heavy metals in phosphate rock and remove the duties on those which export safer phosphates higher quality phosphates,” he said, stressing that this needs to be addressed so that farmers “can benefit from a product’s fertilisers with a low level of cadmium products at a competitive price”.

However, while he did not contest the concerns surrounding cadmium, Green MEP Benoit Biteau said this throws up the sticky issue of sovereignty, highlighting the geopolitical complexities surrounding the debate.

“This is a very complex geopolitical context because of our relationship with Morocco,” he said, adding that the EU’s top court, the European Court of Justice, has denounced bilateral agreements between Morocco and the bloc.

“It did have a negative impact on the regulation in Europe to reduce the level of cadmium in our soils as well as in our waters, but this is nevertheless a fact,” he said.

The Green lawmaker also raised the issue of autonomy, highlighting that, when the farmer is reliant on phosphate coming from outside the EU, such as North Africa, the farmer is not autonomous, leaving the sector vulnerable.

However, rather than upping the number of imports of safer phosphates into the EU, Biteau highlighted the need to reduce reliance on fertilisers.

“We need to find a new logic and come up with answers which free us from this dependence because also the resources in fertilisers are finite resources,” he said, suggesting that more support via the EU’s Common Agricultural Policy (CAP) should be more focused on reducing the use of phosphates.

“Farmers must become more autonomous. Otherwise, we are putting our life and the lives of others at risk,” he said.

However, Safer Phosphate’s Michaux contested this, stressing that fertilisers play, and will continue to play, a key role to feed the growing population.

“There are more and more people on Earth. We have to feed people. So you need crop protection, you need fertilisers,” he stressed.