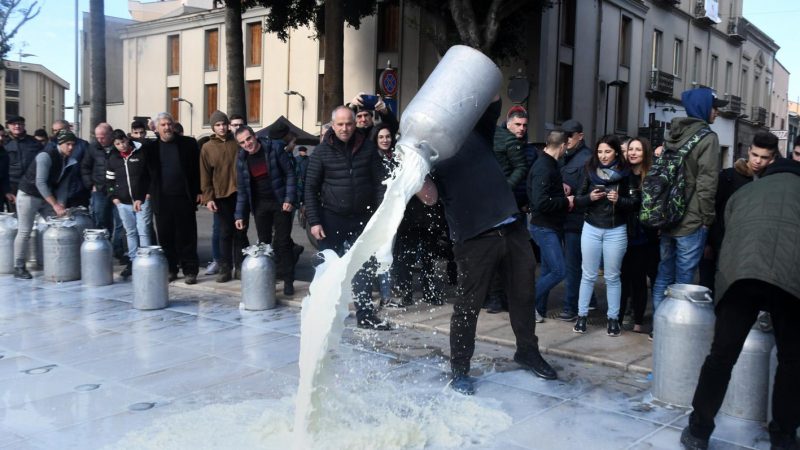 A Commission source told EURACTIV.com that the sheep milk price crisis will be on the agenda of today’s meeting between Hogan and Centinaio.

Sardinian shepherds have made their displeasure over the falling price of sheep milk well known, ahead of crucial regional elections that will take place at the end of the week.

Prices have dropped from 85 to 60 euro cents per litre compared to last year, as sales of Pecorino Romano cheese have recently plunged, as demand falls.

Fluctuations in prices are heavily linked to demand for the cheese, a product with a protected designation of origin (PDO) that accounts for about half the island’s sheep milk production.

In the last few weeks, dairy farmers have literally been pouring their milk down the drain rather than sell it at the current low price. Some demonstrators have also picketed roads, assaulted dairy transport vehicles and forced hauliers to dump the milk on the ground.

Both the local and central government are working to secure a deal between the shepherds’ organisation and the food processors industry.

But the two sides still remain far apart as a first proposal to set the price at around 72 cents per litre was considered unsatisfactory by the farmers.

The government is struggling to convince the industry to pay a fixed price of around 1 euro per litre, as well as taking specific supporting measures like removing between 15,000 and 20,000 tons of cheese from the market.

On Thursday, another attempt will be made to analyse and eventually accept the government’s plan intended to help prices recover.

Regional elections in Sardinia will take place on Sunday and Salvini is spending the entire week campaigning on the island, as his party is seeking another electoral success after the one in Abruzzo last week.

Yesterday (18 February), Salvini met a delegation of shepherds and representatives from the dairy industry in the province of Sassari, saying that the agreement seems close.

EU stands by the shepherds

The EU executive is aware of the difficult situation of sheep milk producers in Sardinia and shares their concerns, a Commission source told EURACTIV.

The source added that the Commission is urging farmers to make the most of the instruments already available in the framework of the Common Agricultural Policy, recalling also the overall budget of €191 million that the Commission spent this year on promoting good quality EU food products in the EU and across the world.

The Commission suggested that to help stabilise prices, producers can organise themselves in order to have bigger bargaining power in the commercial negotiations and to manage the supply of milk for the production of Pecorino Romano.

“Sardinian shepherds can count on my commitment to defend their right motivations,” President of the European Parliament Antonio Tajani said in a statement.

“I am working with EU Commissioner Hogan to ensure that the hard work of Sardinian shepherds is properly remunerated,” he added.

Centinaio will present to the Commission his government’s plan to drive sheep milk price up, including the €49 million of public intervention to remove unsold Pecorino from the market.

The minister will have a press point with Brussels-based reporters in the afternoon after the meeting with Hogan, a minister spokesperson informed.

Securing the blessing of Brussels, even on an informal basis, could help the negotiation position of the government.

Some Italian consumer organisations deem a forced withdrawal of unsold cheese as unlawful state aid, leading to an increase in retail prices.

“Our technical experts say it is not state aid,” Centinaio told the press over the last few days.

The attempt to reduce the oversupply on the market is a traditional form of public intervention classified as Private Storage Aid (PSA).

It is allowed in the dairy sector for butter and cheeses with a geographical indication within the frame of the 2013 Common organisation of the markets in agricultural products (CMO) Regulation, but needs to be assessed and approved by the Commission.

The European Commission has ordered Italy to collect €1.4 billion in fines from dairy companies for exceeding EU milk production limits over a period of 15 years, money the government has already paid to the bloc.