The EU’s new ambitious food policy is ready to face tough parliamentary scrutiny from lawmakers who feel being pushed aside by the European Commission.

Since the start of 2021, the European Parliament has been taking the long path to give its contribution to the agri-food part of the Commission’s flagship Green Deal.

Although it might have been somewhat overshadowed by the recent focus on the ongoing negotiations to reform the Common Agricultural Policy (CAP), the Farm to Fork (F2F) strategy remains a crucial blueprint to test the level of ambition for making Europe’s food systems more sustainable.

The set of measures included in the strategy, as well as targets – for some welcome, for others controversial – represents the vision for European agriculture in the decades to come.

The vote in the two relevant parliamentary committees is provisionally scheduled for early May, but according to an EU source, MEPs are planning on having the final approval at the June plenary.

The European Parliament’s environment committee (ENVI) agreed to share the competence on the file with their colleagues on the agriculture committee (COMAGRI), in a sign of appeasement after recent bickering over the reform of the EU’s farming subsidies programme. 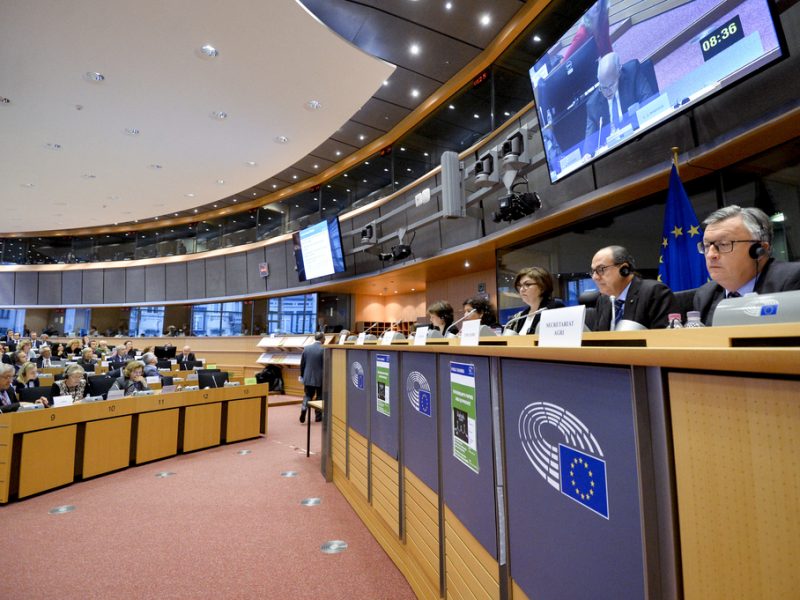 Lawmakers on the European Parliament’s Agriculture Committee (AGRI) reacted angrily as their colleagues on the Environment Committee (ENVI) decided to halt cooperation on the post-2020 Common Agricultural Policy (CAP) file.

Two joint debates have been already dedicated to the many outstanding issues, but F2F’s main topics continue to pop up in other hearings as well.

The most recent was a debate on the revision of the EU’s agriculture promotion policy, in which COMAGRI chair Norbert Lins publicly complained about the fact that the Parliament was not properly consulted on the strong push on organic farming that the Commission is putting in every policy, and which derives from the F2F.

“You have always told us that the F2F strategy is an open debate, that you wanted to hear out at our arguments, and yet the Parliament has not really spoken to this file as yet,” he told the director-general of Commission’s DG AGRI, Wolfgang Burtscher, in a hearing.

The majority in the European Parliament voted against the inclusion of the F2F objectives and targets in its mandate to negotiate the reform of the Common Agricultural Policy (CAP), currently in the so-called trilogue talks between MEPs and EU ministers.

Lawmakers of the three biggest groups – Christian-democrats, socialists, and liberals – have repeatedly affirmed the lawmaking competence of the Parliament, stressing that the F2F is a Commission strategy and, as such, represents a political commitment for the coming years, but is not a binding text.

The first hardship lawmakers have to face is the impressive amount of amendments – a ground total of 2,297 – that have been filed so far.

“I guess a lot of them will be identical so the number will be reduced,” Herbert Dorfmann, one of the Parliament’s two rapporteurs on this sensitive dossier, told EURACTIV.

According to an EU source, the first screening showed that over 200 amendments are references to other documents in a clear attempt to slow down the process, but more clarity is expected in the next weeks with a verdict from Parliament’s legal service.

“More than 2,000 is a lot. We will try to deal with it,” Dorfmann said, putting this huge number of amendments down to the fact that the F2F covers many interests, from farmers to the processing industry, to the retailers to the consumers.

This will be the main task of the two rapporteurs on the file, Dorfmann and German MEP Anja Hazekamp, the ENVI rapporteur.

The two have different personalities and different worldviews: Hazekamp is a member of the Dutch Party for the Animals and keen on topics such as environment and animal protection, while Dorfmann is an agronomist perceived as much closer to farmers’ interests.

The diversity in the rapporteurs is, however, key to ensuring that all sides get heard.

Over the past few months, in the focus of this F2F battle were several specific bones of contention; the targets on pesticide, the possible shift toward more plant-based diets, or the never-ending row over mandatory front-of-pack labelling.

But also the farmers’ role in this transition toward more sustainable food systems is so far being highly considered in the debates among the MEPs.

Although the Parliament is ready to send its contribution, there is a caveat: MEPs are not going to change the strategy itself.

“We do not have this capacity, so the strategy will remain as it is,” explained Dorfmann.

According to the Italian lawmaker, the final report should make clear to the Commission for which ideas there is a majority in the European Parliament.

The main goal of the lawmakers is, therefore, not to influence the strategy, but the 37 pieces of legislation that will come after to implement the strategy in the next years.