BIGH's biggest prowess lies in the fact that they are raising fish in the middle of the city and using their excrements to nurture the plants. EPA-EFE/STEPHANIE LECOCQ

It has been possible to eat sea bass from Brussels ever since Belgian architect Steven Beckers, a pioneer in urban agriculture, founded BIGH (Building Integrated Greenhouses) in 2015.

Covering an area of 4,000 square metres, Europe’s largest urban farm is located in the heart of Brussels, on the rooftops of the Foodmet, a food hall known as “the belly of Brussels”, which attracts more than 100,000 people every weekend.

“Having always had a vision of the city as a solution and not a problem, I’ve been investigating ways to make it productive,” said Beckers.

“As an architect, I also saw the potential of surrounding a building with a productive greenhouse whose plants regulate the climate and protect the occupants from extremes, while at the same time purifying the air of the CO2 it is burdened with,” Beckers added. 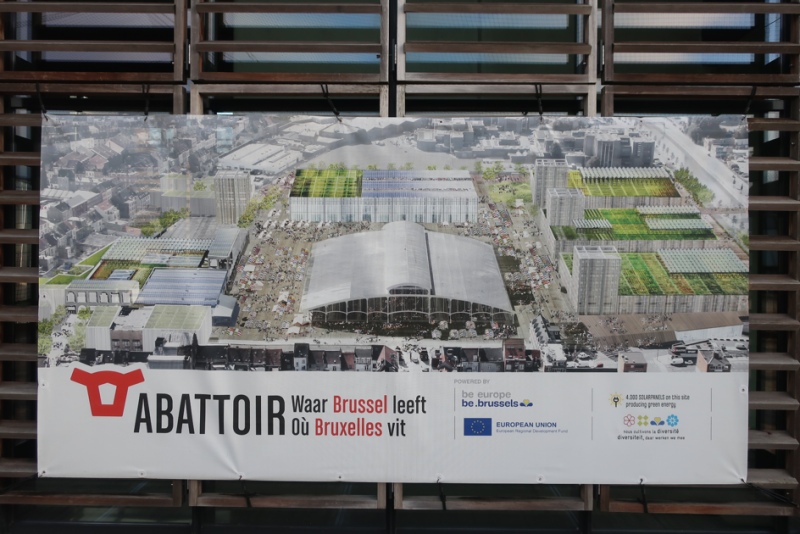 The BIGH project is located at the bottom left of the map. The project of the Brussels region is to revitalise this neglected area in the long-term, by transforming other roofs into green living spaces.

On the roofs of the Foodmet, the farm adopts a circular economy model by ensuring that nothing is lost and everything is re-purposed. The farm’s energy comes primarily from the energy lost by the building it overlooks and from solar panels.

“We recover the fatal energy from the Foodmet’s cold rooms using a heat pump. The pumps are powered by electricity from the site’s grid, which itself is largely powered by photovoltaics. So, we mainly use wasted energy, as well as green energy,” the founder added.

But BIGH’s prowess lies in the fact that they are raising fish in the middle of the city and using their excrements to nurture the plants. The striped bass, native to South America, is raised in large ponds, in which biofilters treat its excreta to transform them into nitrites and then into nitrates, which are, in turn, used as nutrients for the tomatoes, eggplants and peppers in the greenhouse.

“The choice of striped bass is based on the fact that it is a quality sea fish, whose metabolism corresponds well to that of a closed system farm, by its gregarious nature and its habit of living in rivers and estuaries,” said the architect.

“Chefs appreciate it for its flesh, which is excellent, and its freshness, which lasts a few hours instead of the usual few weeks between the catch and the plate,” he added.

Above the aquaponic cultivation is an automated high-tech greenhouse, where irrigation and light are finely distributed and controlled. On large sliding tables, several varieties of herbs grow in the surrounding heat, before being sent to stores or supermarkets.

The outdoor vegetable garden is used as a training ground for urban agriculture by attempting to socially and professionally reintegrate people who, via the Groot Eiland association, take care of the fruit and vegetables, transport them to the association’s restaurant and prepare them.

This cultivation without antibiotics, pesticides or synthetic fertilisers will soon cross the border to be emulated in France and – why not – elsewhere in Europe.

“We are planning several projects in Belgium and France, the opportunities are numerous, and we want to move forward step by step with a second project in the Hauts-de-France, and others in Paris and the surrounding area,” said Beckers.