Swedish opposition parties to cry wolf in defiance of EU 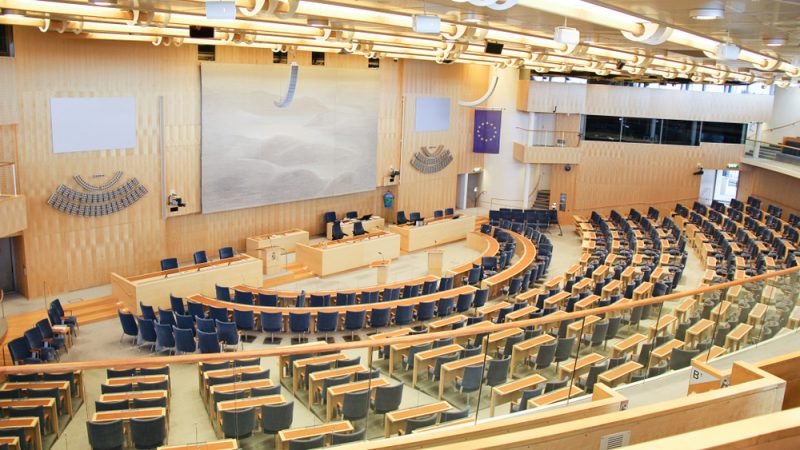 After divisions and major disagreements in the Riksdag’s environment and agriculture committee, a majority finally agreed on Saturday (7 May) to reduce the minimum number of wolves in Sweden from 300 to 170. [Shutterstock/Angela Cini]

Most lawmakers in the Riksdag want to reduce the number of wolves in Sweden by nearly half, even if this means they have to defy the EU.

After divisions and major disagreements in the Riksdag’s environment and agriculture committee, a majority finally agreed on Saturday (7 May) to reduce the minimum number of wolves in Sweden from 300 to 170.

Behind the decision are the opposition parties of the Moderates, the Sweden Democrats, the Christian Democrats and the Centre Party, SVT reported.

The agreed number of 170 stems from a decision by the Riksdag back in 2013 when it was decided that Sweden should have at least 170-270 wolves in Sweden to meet the EU directive’s requirements for favourable conservation status.

The Moderates, the right-wing and main opposition party, want to reduce this number to 100, which is the “minimum viable wolf population”, according to a study from the Swedish Environmental Protection Agency.

However, such a move may not be in accordance with international agreements that bind Sweden or the EU Habitats Directive, which aims to preserve and protect endangered species.

Green MP Maria Gardfjell, the committee’s first vice-chair, criticised the decision, arguing that it is illegal. “The consequences are that it violates EU legislation against biodiversity, and it could lead to Sweden being taken to court in the EU,” she told Swedish Radio.

The Moderates are prepared to defy the EU and pursue the issue independently of the international agreements by which Sweden is bound, the party said.

“We are prepared to challenge the EU, to look at the case they have been pursuing against Sweden for so long. We must put our foot down and show that we have national influence over predator management,” the party’s rural policy spokesman John Widegren told the Swedish hunting magazine Svensk Jakt.

The decision taken by the Riksdag committee may result in parliament giving the government the mandate to investigate the issue.

While hunters and livestock owners believe wolf numbers should be kept to a minimum, others believe Sweden must preserve the species in the country.

According to the Swedish Environmental Protection Agency’s latest inventory in 2020-21, there were around 480 wolves in Scandinavia. At least 395 of them live in Sweden.