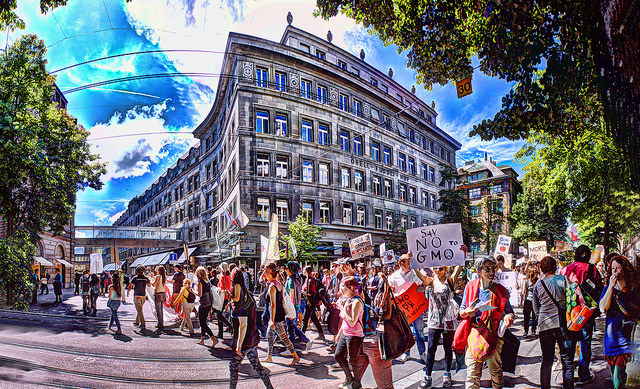 The Germans don't like it. Anti-GMO demo, Berlin. [Artwear.ch/Flickr]

US Trade Representative Michael Froman expressed disappointment on Wednesday (22 April) that the European Commission has decided to let member states have ‘opt-outs’ on imports of genetically-modified food and feed.

Froman, who is America’s chief negotiator in the ongoing Transatlantic Trade and Investment Partnership (TTIP) talks between the US and the EU, said the Commission’s new proposals will allow member states to ignore science-based evidence and environmental facts.

“We are very disappointed by today’s announcement of a regulatory proposal that appears hard to reconcile with the EU’s international obligations. Moreover, dividing the EU into 28 separate markets for the circulation of certain products seems at odds with the EU’s goal of deepening the internal market,” Froman said.

“At a time when the US and the EU are working to create further opportunities for growth and jobs through TTIP, proposing this kind of trade restrictive action is not constructive,” he continued.

On Wednesday, the European Commission announced that it would allow member states to opt-out from the Europe-wide approval system of genetically-modified organisms (GMOs) with the objective to give national governments’ view the same weight as scientific advice in the authorisation of GMOs in their territory.

Froman’s criticism echoed those of the European Association of Bioindustries, EuropaBio, which said the rules would undermine internal market rules and thus damage jobs, growth, innovation and competitiveness.

In 2006, a World Trade Organisation (WTO) dispute settlement panel found that member state bans of GMO products violated trade rules, as they were not based on risk assessments. Since then, the US has been working to “normalise” agricultural trade with the EU, Froman said in the statement.

The European Commission proposed allowing national cultivation bans for GMOs in July 2010, in a bid to break a deadlock in EU GM crop approvals, which has seen few varieties approved for cultivation over the last 12 years.