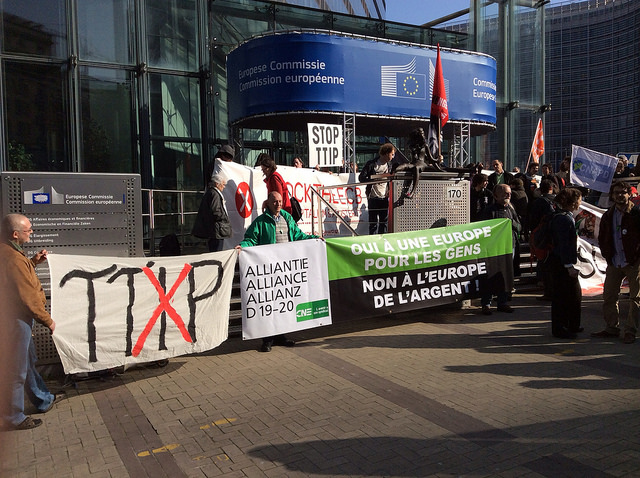 Vytenis Andriukaitis, Commissioner-designate for Health and Food Safety, told MEPs today (30 September) during his confirmation hearing that the EU would not lower its safety standards as result of negotiations over the Transatlantic Trade and Investment Partnership (TTIP).

MEPs expressed concern the EU would loosen its rules on, for example, the use of hormones or antibiotics in livestock and of chlorine baths for poultry because of the EU-US trade talks. These rules currently limit or even ban some US exports to the Union.

“As a doctor, I will say no to any attempt to lower EU standards. One cannot compromise on that. These standards shall not be sacrificed for free trade. The high EU standards have also facilitated our global exports,” Andriukaitis said.

When asked if the EU executive would consider easing HACCP or food hygiene rules for companies with less than ten employees in order to lighten the administrative burden on small businesses, he answered that such a measure would be “irresponsible”.

Andriukaitis gave the example of a small company with three employees that prepares food for school canteens. He said, “What if an employee injures their finger and then passes on an infection on to children through the food?”.

One controversy is the decision by President-elect Jean-Claude Juncker to pass policy areas such as approval of medical products from DG Sanco to DG Entreprise.

He tried to reassure MEPs on that point. “Our DG will be represented in the European Medicines Agency. Decisions will be made together and we will attempt to reach compromises with Mrs Bienkowska, Commissioner-designate for that portfolio,” he said.

Andriukaitis, of Lithuania, is a former surgeon, a long-time member of his national parliament and most recently his country’s health minister. He was scrutinised by MEPs from the Environment Committee and the Agriculture and Rural Development Committee.

Regarding a number of dossiers, he said that more scientific analysis and assessment of current practices in member states would be needed before committing to any new EU initiative.

That was the case for the cloning of animals for human consumption and labelling of clone-containing food, EU funding for human stem cell research and cross-border risks of GMO cultivation, he said.

He said he was open the idea of new rules, especially for issues he considers urgent—such as the surge in antibiotic-resistant infections that may result from the use of antibiotics in animal feed. Means to curtail food waste, a nutrition labelling of alcoholic beverages and origin-of-meat labelling are other topics that may lead to new rules if justified by research.

In other cases, such as the recognition of alternative complementary medicines, Andriukaitis said that these were a matter of member state sovereignty, but said that he was not against stimulating exchanges on best practices, for example.

That also applied to the wider dissemination of preventive health information, including on fast food, and currently under-utilized EU structural funds could be used to support such initiatives.

Cross-border debate could be fruitful on issues such as fair pricing for medicines and a more effective framework favouring generic medicine. The wider use of generics could generate savings which, if pooled in a single fund, could both finance industry innovation and cut public healthcare costs, he said.

A similar mechanism could be used to stimulate the deployment of eHealth, the use of digital technology to improve healthcare efficiency, and be a source of job creation, he added.

Unlike Karmenu Vella, the Commissioner-designate for Environment and Fisheries who had his own hearing on 29 September, Andriukaitis was more forthcoming about the EU’s forthcoming legislation and initiatives.

A review of the GMO authorisation decision-process within six months, the adoption of secondary legislation under the Tobacco Products directive and the definition of final criteria for endocrine disruptors are on the agenda going forward.

Repeatedly asked about his ability to balance healthcare and competing industry and member state interests, Andriukaitis said, “I am a doctor and took an oath to cause no harm. I am not afraid [to take on external interests]. I faced the KGB and was imprisoned in Soviet times.”

While willing to engage with member states to find solutions, the Commissioner-designate stressed that the transposition of EU laws cannot be delayed and that he will make full use of EU legal enforcement tools to ensure they are implemented.