As a long-term strategy, the EU's new food policy will have considerable spin-offs on future generations, which can be seen as the true main recipients of the F2F. [SHUTTERSTOCK]

Ensuring that food producers are provided with the appropriate alternatives is the best way to make progress in meeting the specific objectives set in the new Farm to Fork strategy (F2F), according to young European farmers interviewed by EURACTIV.

As a long-term strategy, the EU’s flagship food policy will have considerable ramifications on future generations, which can be seen as the true main recipients of the F2F.

But this also means that young farmers will be asked to make the lion’s share of the efforts to put the strategy into action.

Young farmers’ organisation, the European Council of Young Farmers (CEJA), took a generally positive but cautious view on the Commission’s ambition to make the European food system the global standard of sustainability.

On Monday (13 July), CEJA’s delegates approved a position in which they insisted on the need for strong investment support to successfully implement the required technological tools and management choices.

Contacted by EURACTIV, CEJA President Jannes Maes said that what young farmers need is a toolbox “as broad as possible” of solutions to lead this transition.

“The larger you make this toolbox, the easier is for different types of farmers to find the right tools to do their part,” he said.

For Maes, the F2F includes some positive elements in this regard, such as a strong commitment towards ensuring full broadband coverage in rural areas, as well as looking at the new plant breeding techniques (NPBTs) as “a viable option”.

“However, our general feeling remains that the scope of the tools taken into account is way too limited,” he added.

For instance, investments should be directed not only towards research and development (R&D) but also towards the practical implementation of new technologies on the ground.

As an example, he cited the newest heat detection technology that could offer livestock farmers the option to manage their herds more efficiently.

“That’s very nice, but at the end of the day, it’s very expensive to get things to work,” he said, adding that farmers are also not keen to invest in this kind of innovation due to a lack of knowledge.

Not (only) about the money

Veronica Barbati, national president of Italy’s young farmers’ association Coldiretti Giovani Impresa, welcomed the F2F as an important opportunity to continue on the path toward increased sustainability in farming, but also cautioned:

“This would be difficult without the right financial and political tools,” she said referring to the risks of cuts in the agricultural spending of EU’s long-term budget.

However, she added that there are also non-budgetary related policies that need to be put in place, such as a fairer trade policy and more transparency for consumers.

“We need the right tools at the European level to improve communication between farmers and consumers,” she stressed.

According to her, there are now high expectations for the Commission to “be brave” and carry out a mandatory country of origin labelling, as it will bring consumers closer to farmers and allow them to make informed choices.

No reduction without alternatives

There are also dissenting voices, like Eva Marín, a young farmer from Toledo, Spain, who was not at all satisfied with F2F and the Biodiversity strategy.

“I do not understand how the Commission decided to present these strategies in the middle of a health crisis, without knowing how it can affect Europe’s food security,” she told EURACTIV.

Marín asked for a longer transition period to achieve the main objectives – “at least until 2050” – and more flexibility between countries and regions in Europe.

“Spain has lowered its consumption of antibiotics per animal by more than 20% in recent years, while other countries that have done nothing,” she said.

The young Spanish farmer hopes that support for new genomic techniques will gain momentum, saying that this can help farmers to lower their consumption of plant protection products (PPPs), fertilisers and help crops increase their resilience to drought.

“Without alternatives, there can’t be any reduction,” she concluded, saying that these techniques are already used by EU’s competitors in the rest of the world and are not detectable at the borders.

CEJA’s Maes highlighted that the Commission failed to address the strongest barrier that young farmers are facing: access to land.

“Targets are essential to the success of any strategy, but it seems that the main way to bring improvements refers to land use,” he said.

For him, addressing the challenge of access to land for young farmers should be a key priority, even in plans for greening agricultural practices.

“If the strategy doesn’t come up with a coherent response to that challenge, it will never be successful,” the young farmer warned. 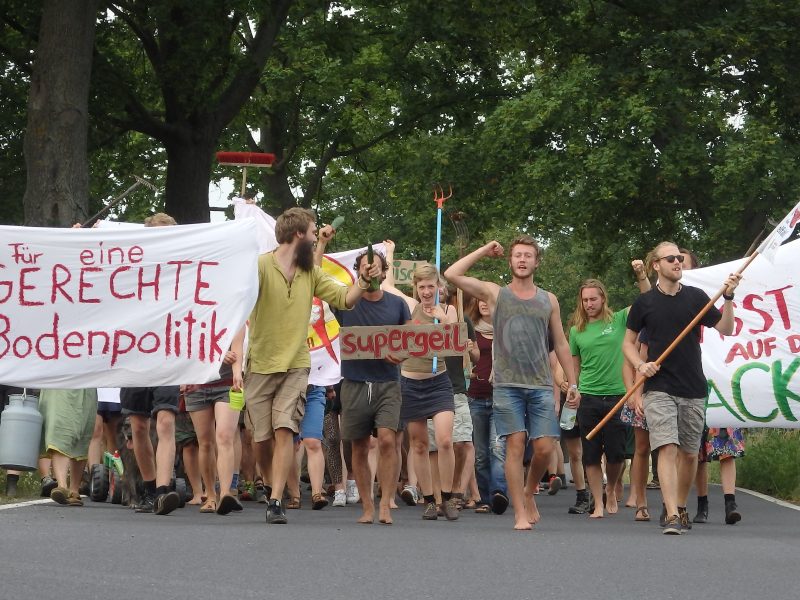 In East Germany, young farmers are finding it increasingly difficult to purchase land because significant investors are not acquiring land for agricultural purposes and because former GDR  cooperatives are being privatised. EURACTIV Germany reports.