The importance of dietary fibre in the daily diet 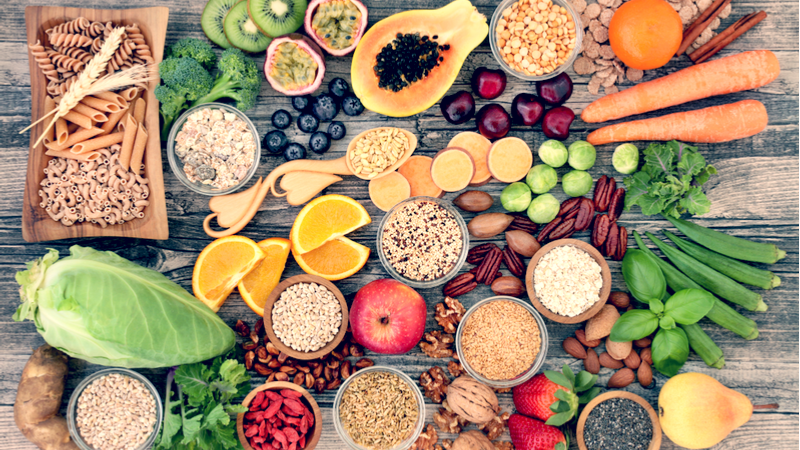 It is generally recommended to get your dietary fibre through a variety of food sources. [Marilyn Barbone/Shutterstock]

What is dietary fibre?

Dietary fibres are carbohydrate-based plant materials that are neither digested nor absorbed in the upper parts of the digestive system. This is because dietary fibres cannot be broken down by our own digestive enzymes. The definition of dietary fibre not only includes those located in the cell walls of plants (e.g. cellulose, hemicellulose, pectin), but also other non-digestible carbohydrates such as resistant starch, oligosaccharides (e.g. inulin) and lignin. Dietary fibres present in plant cell walls are the major components of dietary fibre and as they provide a rigid structure by surrounding plant cells, they affect the digestion and release of nutrients [1-3].

What are the effects of dietary fibre?

Dietary fibre is well known for its significant impact on digestion and gut function, which include effects on the proportion of nutrients available for absorption, the time it takes for food to pass through the digestive system, slowing of the flow and mixing of the food as it is digested, changes in the rate and extent of macronutrient digestion and absorption, and metabolites the bacteria produce which support human health [1] . Fibres can physically bind food components and transport them further down the intestine, but also regulate small intestinal cell, thereby lowering the rise in blood glucose and/or lipids after a meal [1]. Finally, a higher fibre intake has been associated with reduction of chronic diseases like cardiovascular diseases, type 2 diabetics and cancer [4].

Dietary fibres differ regarding their physical and chemical properties. For instance, fibres can consist of very long to relatively short chains of molecules, are soluble in water to a varying degree, can in some cases form a viscous gel-like substance upon contact with water, and range from almost completely fermentable to largely non-fermentable by the bacteria in the gut. Unsurprisingly, different fibre types have different effects on gut function, metabolism and health [1,3]. For example, largely insoluble cereal fibres from wheat, bran and oats contribute to an increase in stool mass [5,6], whereas, beta-glucan, a soluble, viscous fibre found in oats and barley, reduces blood cholesterol levels by interfering with cholesterol absorption [7,8]. Consumption of soluble, viscous fibres (e.g. beta-glucans) can also contribute to a reduction of the blood glucose rise after a meal [9-11].

How much dietary fibre do I need?

Dietary fibre aids laxation by increasing faecal bulk and stool frequency and reducing intestinal transit time. According to the European Food Safety Authority (EFSA), to maintain normal laxation, it is recommended that adults consume 25 g of fibre per day. Although there is evidence of beneficial health effects if dietary fibre intake is increased, and some European countries dietary guidelines recommend higher amounts. However, in many modern societies, diets are very low in dietary fibre [2]. Nowadays, fibre intake in most European countries is below the recommended levels, with average intakes as low as 12.7 and 13.6g per day in Spain and UK, respectively [11-12].

Fibre intake and the gut microbiome

After passing through the upper parts of the digestive system undigested, dietary fibres reach the large intestine, where they are fermented by around 39 trillion bacteria which live there. For your reference, the average human body consists of 30 trillion cells [13]. In the large intestine fermentable dietary fibre is converted into short-chain fatty acids and other metabolites [14]. Dietary fibre that is not (fully) fermented by the bacteria is excreted in faeces [14]. Short-chain fatty acids represent a source of energy for the host (up to 10% of daily energy intake) and are important signalling molecules that affect our health in many ways, for example by affecting intestinal transit, decreasing glucose production in the liver, reducing inflammation, and increasing satiety [15-17].

Humans have evolved with dense microbial populations that colonise our gut, which are related to the immune system, cardiovascular health, and body weight, among others. However, emerging evidence suggests that current lifestyle – in particular, a diet low in dietary fibre, has led to an important reduction of the human gut microbiome diversity [18]. A low-fibre diet does not provide enough nutrients for the gut bacteria, leading to a loss of species and, therefore, a reduction in the production of short-chain fatty acids and other metabolites with important physiological functions [18]. An adequate dietary fibre intake may thus be a requirement for an optimal balance of the microbes living in your gut [13-19].

How do I boost my dietary fibre intake?

To obtain the full range of health benefits associated with the consumption of a mix of fibre-rich foods, it is generally recommended to get your dietary fibre through a variety of food sources [2,20]. Intakes of 25 g or more of fibre/day is achievable through a healthy diet, if meals are based around wholegrain varieties of starchy foods, include at least five portions of fruit and vegetables daily (1 portion = 80 g), and fibre-rich snacks (nuts, seeds, and dried fruit) and other high-fibre foods (e.g. pulses) are selected. However, in certain circumstances, it may be difficult to meet the fibre recommendations via traditional foods, and innovative high-fibre fortified products may help consumers to increase their fibre intakes [21] and provide additional targeted health benefits (e.g. blood glucose control, blood cholesterol reduction, normal intestinal function) in case of specific fibre types, such as oat fibre, beta-glucans from oats and barley [6-10].