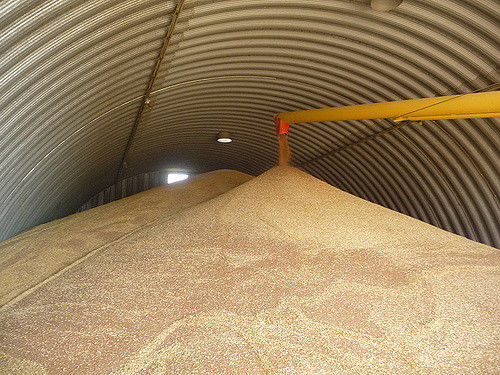 The price of commodities like wheat can be heavily affected by speculation. [four4dots/Flickr]

MEPs have the power to protect our food security by setting tough standards on commodity speculation. They should not bow to industry lobbying but put consumers first, writes Myriam Vander Stichele.

Myriam Vander Stichele is a senior researcher at SOMO.

The debate over setting standards to restrict price speculation with food, energy and other commodity derivatives has seen sparks fly between the European Parliament, the European Commission and the European Securities and Market Authority (ESMA) since 2015. Protests and conflicts continue ahead of a plenary vote by the Parliament on two standards of the Market in Financial Instruments Directive (MiFID II). These standards, RTS 20 and 21, on speculative commodity trading had to be redrafted by ESMA and the Commission after pressure of the Parliament committee dealing with financial regulation (ECON). This resulted, among others, in the possibility for ‘position limits’ on speculative trading in food derivatives to be set at somewhat lower levels than for other commodities (RTS 21). However, a starting point (‘baseline’) for setting position limits for food derivatives is at 20%. This still allows regulators to permit one speculative trader to derail pricing by holding 35% of a certain food derivative market, and even up to 50% in exceptional circumstances. The S&D group, already supported by Greens and GUE/NGL, calls on MEPs to reject this RTS 21 at the plenary vote in order to lower the baseline to 15% and keep MiFID II’s intent to curb food speculation.

Society and business at opposite ends

All along the MiFID II process, civil society organisations advocated for restrictive position limits to prevent food price speculation, excessive volatility and price spikes, which makes millions of people go hungry and poorer, as happened in 2007 and 2008. A new public campaign asks MEPs to vote against RTS 21 in plenary in order to set tough restrictions on food speculation. This online petition was already reaching 72,000 signatures by mid Thursday 9 February 2016.

The commodity industry and financial players have also been fiercely lobbying at all levels, delaying the implementation of MiFID II until 2018. They also successfully pressed to keep the limits on speculative positions as high as possible, arguing that commodity prices would increase due to lack of liquidity. They also fear that trade would migrate to US derivatives markets since the current US deregulatory financial agenda includes commodity derivatives trading.

Commodity conglomerates such as Cargill, and energy providers, have also heavily lobbied against the second standard, RTS 20. This standard defines whether speculative derivatives trading by a commodity company is not excessive, but ‘ancillary’, compared to that company’s overall activities and to derivatives markets. Similar lobbying took place in the US under the Dodd-Frank Act. The US authorities decided that Cargill, Shell and BP needed to be regulated as financial players (‘swap dealers’) because of the huge volume and nature of their speculative derivatives trading. Under MiFID II, any commodity company whose speculative trading goes beyond a set threshold would fall under stricter financial regulation – which companies consider too costly. The currently proposed high threshold (RTS 20) will result in light regulation and less robustness against financial shocks.

Deregulation in the US might bring back the situation of excessive speculation that allowed the food and energy prices to peak in 2007-2008, which severely affected poor people also in the EU.

As a World Bank study exposed, more than half of increases in agricultural commodity prices can be attributed to changes in crude oil prices. It is to be noted, therefore, that since 2013, commodity conglomerates have increased their speculative commodity trading for financial investors – hiring traders from investment banks and buying up the commodity desks from some investment banks. A highly risky practice given that many hedge funds have had to close down due to bad bets with commodity derivatives. Commodity conglomerates also seem to speculate with derivatives to offset losses from low prices and divestment from CO2-heavy energy.

Ignoring the risks of climate change

The EU needs to protect people from food price speculation, new trends in risky commodity speculation and climate change impacts. MEPs can do so when they vote against RTS 21.