Eric Sievers is the director of Ethanol Europe.

There is a fundamental difference between predictions and results. After the fact, predictions are only valued by those looking to improve the veracity of predictions and to ideologues who refuse to adapt their view of reality to what actually happened. Just as Brexit is a reality, EU ethanol policies have not had adverse impacts on food security.

Ideologues have equivalent problems with both of these unexpected outcomes. Ideologues are just that – ideologues. Their views and opinions are much less a quest for finding conclusions based on fact than on finding something that can be called “facts”, with the only things being considered needing to pass the test of supporting a pre-determined conclusion.

In the study conducted by consultancy Cerulogy for the NGOs BirdLife and Transport & Environment, this manifests itself in taking a decade-old study from an eminent economist that warns of a high risk of biofuels impact food prices and then ignores the same economist’s follow-on paper three years later admitting that the data support no meaningful correlation with biofuels—only with oil.

A certain die-hard (and well-funded) group of just a half dozen individuals in the biofuels debates has for the past decade generated increasingly misleading “facts” to support an ideological crusade against biofuels. At this point, their effort is fundamentally insane; actual data support the real world reality that EU ethanol (and ethanol policy) has created a wealth of jobs and rural sustainable development, as well as a fuel that has surpassed all climate expectations and high protein animal feed that is increasingly needed in Europe. Under no measure (that is based on real values rather than theorised values from a decade ago that have been definitively disproven or just ancient data) is EU ethanol “worse than oil”, and under the legally required methodology of the EU, it is actually 70% better than oil, on track to reach 90% in a few years.  All with no adverse consequences.

These anti-biofuel ideologues claim to be pro-climate and pro-development, but their positions in fact support the oil status quo, the concentration of power in the energy sector in the hands of large multinationals, the decline of the EU farming sector, the abandonment of rural European villages, low rural incomes, less EU energy security, and a host of other perverse outcomes that are antithetical to the goals that these ideologues say they support.

This shows that actual outcomes are, for this group, far less important than preserving their own ideology. As with ideologues of previous generations, they may, eventually, realise that their prescriptions worsen the situations that they seek to improve. As this group is, I believe, sincere instead of cynical, holding out hope that they will admit that they spent a decade fighting against a solution rather than for it is unlikely; that outcome would be far scarier at a personal level for this group than climate destruction.

During the current – and now sustained – crisis in EU farming, where good agricultural land is being simply abandoned because agricultural prices are at historical real price lows, it is absurd and worrying that these ideologues issue a report arguing that agricultural commodity prices must be high, due specifically to biofuels, because 26 old predictions say biofuels make commodity prices high. The wisdom of the old adage that two wrongs don’t make a right is lost on this group; in their minds, 26 wrongs is enough to make a right. It is even more worrying that, despite this group’s documented track record of bringing misinformation into the biofuels debates (these individuals were active, even fanatical, promoters of the mega-lie that EU biofuels policy led to 6 million hectares of land grabs in Africa), there are still people that listen to them (and fund them, the EU Commission being their major funder).

The basic hypocrisy of this group is also stunning. Lamenting a theorised 0.6% price rise over a decade in feed wheat and feed corn (which is not food), a core member of this group declares that, as a moral issue, such an increase is unacceptable. At the same time, this group is strongly in favour of the greening provisions of the CAP, a policy requiring EU farmers to grow less, which will, of course, increase prices. And likely increase them by more than 0.6%. Being against ethanol but for greening is an irreconcilable contradiction.

The reality is that the EU has increased the use of crop-based biofuels over the past decade (not food based, since no food is used, only animal feed). Over that period, following the oil price and by no means following any increase in demand for biofuels, the prices of these crops have risen and fallen. Biofuels use has gone way up, and prices of crops have come way down.

Enough with ideology. As long as EU agriculture hasn’t at least reclaimed the acreage of say, 2000, EU agricultural policy is a failure. The sine qua non of EU agricultural policy success should be whether or not farming is actually happening, and if it isn’t, then demand for agriculture needs to be stimulated rather than decreased. Policies that have farmers farm and invest in farming are good; those that have them tell their children to go study accounting are bad. The bioeconomy (fuels, materials, medicines, plastics, etc.) is the only thing out there right now that can offer EU farmers any grounded hope for the kind of increased demand needed to make EU agriculture sustainable. Having pro-climate and/or development NGOs fight the bioeconomy is, thus, perverse and no more and no less than an active extension of aid and comfort to the fossil fuels industry.

The day that increased demand for EU agriculture brings a halt to the abandonment of EU farmland is the day when these anti-biofuels ideologues might deserve a second hearing, and until then, they need to get out into the actual world to see what is actually happening, rather than searching for a 27th prediction of doom based on otherworld assumptions and false data. 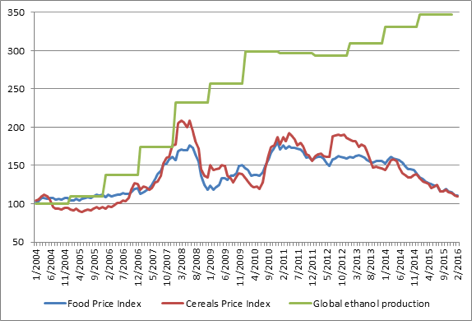