Shirley Rodrigues, the deputy mayor of London, said the government had “a moral obligation” to act on the city’s 9,000 pollution-related early deaths and the £4bn annual cost to the NHS. [Wei Huang / Shutterstock]

Europe’s poorest, least educated and most jobless regions are bearing the brunt of the air pollution crisis, according to the first official stocktake of its kind. EURACTIV’s partner The Guardian reports.

Nearly half of London’s most deprived neighbourhoods exceeded EU nitrogen dioxide (NO2) limits in 2017 compared with 2% of its wealthiest areas.

Heart-attack survivors exposed to long-term air pollution in the Greater London area were more likely to be readmitted to hospital, where they also had higher mortality rates.

Similar findings were reported in France, Germany, Malta, the Netherlands, Wales and Wallonia, according to data-mining analysis from the European Environment Agency (EEA).

Shirley Rodrigues, the deputy mayor of London, said the government had “a moral obligation” to act on the city’s 9,000 pollution-related early deaths and the £4bn annual cost to the NHS.

She said: “There is a vast inequality in London between the richest and poorest areas. The richest areas own the most cars but people in the most deprived areas have the worst air quality – and the lowest car ownership figures. There is a moral obligation on the mayor – and on all of us – to act.”

While accepting there had been “some noise” against a £12.50 ultra-low emission zone rate due to begin on 1 April, she said the mayor had received a a lot of public support for the charge.

The mother of Ella Kissi-Debrah, who died of an asthma attack linked to air pollution, wants this recorded on the death certificate, which could be a way of focusing the debate, said Hans Bruyninckx, the EEA’s executive director. 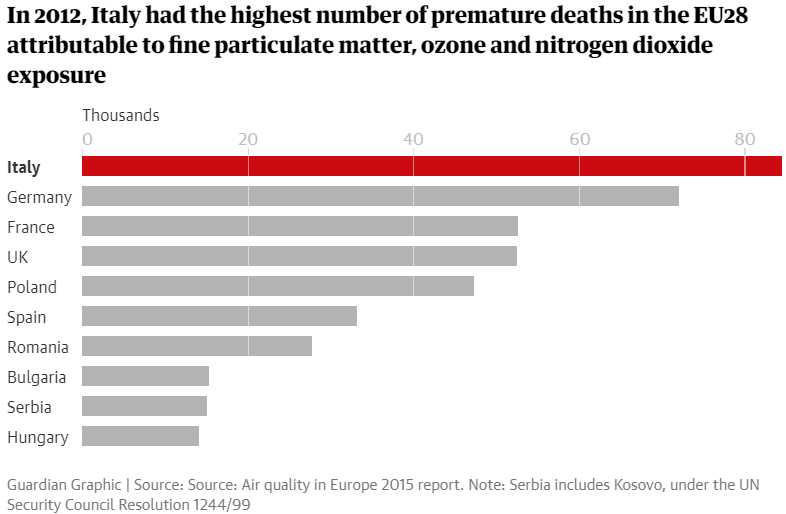 “You can see those connections are already being made by citizens,” he said. “The question is: are we making them at a policy level?”

Across Europe, more than half a million people die prematurely each year from exposure to fine particulate matter (PM2.5), ozone (03) and NO2, but the extent to which the numbers are skewed by class has been under-researched.

Diarmid Campbell-Lendrum, the World Health Organization’s climate change and health team leader, said: “We’ve known at the global level for a long time that the poorest countries are much more exposed than the richest. It’s shocking to see that these inequities are also clear even within one of the richest continents in the world.”

Data in the EEA report shows that heart attacks and strokes account for 80% of early deaths from pollution, followed by lung diseases and cancers.

Older people and children in working-class urban areas are most likely to suffer from its impacts.

“They are also the ones who tend to have the least say in how and where they live, work or go to school, which, in turn, affects their exposure to these environmental health hazards,” the report says. “As a result, their health tends to suffer the most from the impacts of air pollution, noise and extreme temperatures.”

Exposure to PM2.5 – by far the biggest killer – and O3 was highest in eastern European states blighted by poverty, unemployment and poor education.

Across Europe, Kosovo has suffered the most damaging impacts from PM2.5, and Iceland the least.

The EU’s environment commissioner, Karmenu Vella, said: “It is our fundamental duty to to aim for a high level of protection, respect the precautionary principle and take preventive rather than remedial action to promote social justice. The patterns of vulnerability and exposure are set to continue unless we take action that is more decisive.”