More than 90% of new Euro 6 diesels currently on sale are exempt from the restrictions, despite evidence showing they often exceed EU air pollution limits, according to new research by green NGO Transport & Environment (T&E).

Earlier research by T&E found new Euro 6 diesel engines exceed EU nitrogen oxide (NOx) limits by 4 to 5 times on average, while some models were off-limit by up to 10 times, said the study, which singled out Renault, Fiat and Opel models as the worst culprits.

Some Euro 6 vehicles even emit more NOx on the road than Euro 4 and 5 cars that are banned, the study pointed out. 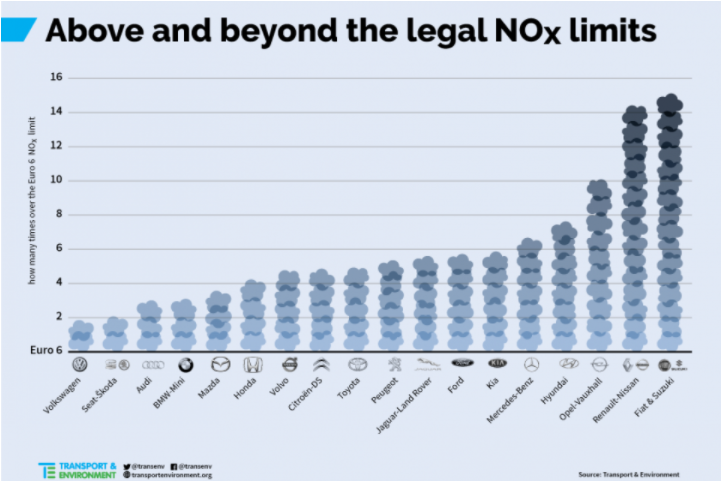 “One of the key weaknesses of the low emission zones and car restrictions in cities is the blanket exemption of mostly dirty Euro 6 diesels,” said Julia Poliscanova, clean vehicles manager with T&E.

“Unless carmakers properly fix these dirty diesels, cities are left with no other option but keep them out of city centres,” she said in a statement.

To be effective, Poliscanova said vehicle restrictions should be based on real-world emission tests that are now widely available and compulsory.

However, the EU is currently going through a transition period in the introduction of the new tests.

The Euro 6 standard currently in force sets a limit of 80mg of NOx per kilometre. But a “conformity factor” temporarily allows measured pollution to exceed this level by 110%.

The “conformity factor” was introduced to allow for presumed inadequacies in fledgling on-road emissions tests that became compulsory last September in the wake of the ‘dieselgate’ scandal. It is due to be phased out by 2023 at the latest.

FuelsEurope, a trade association representing the refining sector, doesn’t deny that discrepancies might still exist with the way emission tests are carried out.

“Early Euro 6 vehicles were not required by legislation to be compliant under real driving conditions and one has to recognise that the mandatory laboratory tests were not reflecting the real emissions’ levels,” said Alain Mathuren, Communication Director at FuelsEurope.

But he argues emission tests carried out on Euro 6 vehicles show they are “fully compliant with emissions levels, without any correction factor, and will achieve the 80 mg limit or better, under real world driving conditions.”

FuelsEurope even argues there is “no difference” between the stricter Euro 6d compliant diesel cars and electric vehicles when it comes to particulate and NO2 emissions. The Euro 6d standard enters into force in January 2020.

“Regarding particulate pollution, with modern technologies it no longer comes from diesel, but from brake and tyre dust,” said John Cooper, the director general of FuelsEurope.

“But electric cars also have brakes and tyres,” he pointed out, saying “it really makes no difference which vehicle somebody chooses.”

“We believe, as more of these cars come onto the road, and the old cars disappear, the air quality problem in our cities will be solved,” Cooper told EURACTIV in a recent interview.

In May last year, a study in the journal Nature said “excess” emissions from diesel vehicles exceeding certification limits were associated with about 38,000 “premature” deaths globally in 2015.

The T&E study was published after a German court last month ruled that heavily polluting vehicles can be banned from the urban centres of Stuttgart and Düsseldorf.

Some European mayors have already called for a stricter Euro 7 standard. In a recent open letter, the mayors of ten European capitals also urged a switch to zero-emissions vehicles within two decades.

But as more and more cities introduce bans, T&E is worried the air pollution problem will simply shift to Central and Eastern European countries, which rely heavily on second-hand cars imported from Western Europe.

“There’s a high risk that Central and Eastern European cities will be flooded with cheap, dirty diesels that Western Europeans can no longer drive where they want,” said Poliscanova. “The European Commission should consider what measures can be put in place to ensure all second-hand imported cars have had their exhaust treatment systems fixed or upgraded.

“All Europeans have an equal right to clean air and a joint European solution is needed,” she said.