The worst affected children in the study had nine times more pollution in their bodies than those in France. [Premières Lignes Télévisio]

Polish children are significantly more exposed to air pollution than French children, research by the University of Hasselt in Belgium has found.

The study, conducted over 28 children in Rybnik, Poland, showed they were between three and nine times more exposed to air pollution than children in Strasbourg, France.

Klaudyna Szewczyk lives in Rybnik, where a coal-fired power station sits on the outskirts of the city. She suffered a stroke three years ago that she’s since realised was caused by the air pollution.

She is now a local campaigner and the mother of two children involved in the study. She said she was expecting bad results, but not as bad as they received.

Her family have decided to move.

“When we got the results, my husband told me we have to look for another place to live – now,” she said. “So we are looking to move out from Rybnik to prevent any health [issues] in our children and ourselves.”

Tests on children in Rybnik and Strasbourg found the Polish children had an average of 425% more black carbon, a carcinogenic substance linked to the burning of fossil fuels, in their urine.

The lead scientist from Husselt University, Tim Nawrot, said he “has never seen” such high concentrations. 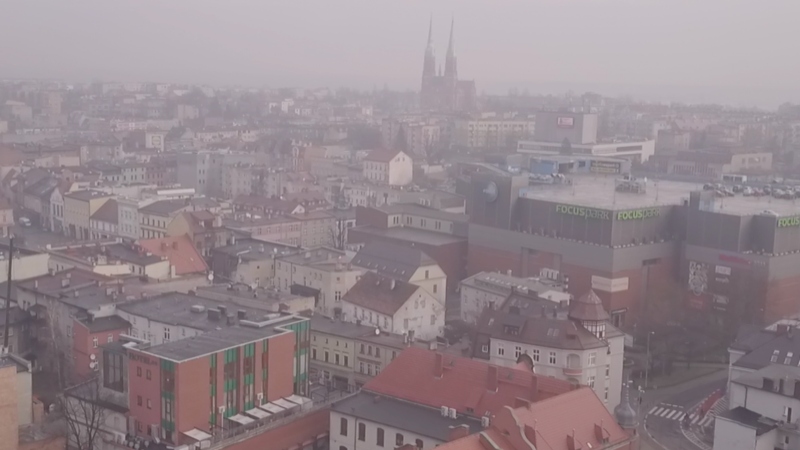 Some residents have taken matters into their own hands, buying air filters and wearing masks [Premières Lignes Télévisio]

Polish Smog Alert, a social movement fighting for better air quality in the country, says that “the poor condition of the air is responsible for 45,000 premature deaths in the country and numerous health problems”.

Martin Boudot, a French documentary maker, worked with the scientists to do the study. He is optimistic that the data will help change and that some policy is already beginning to become greener.

But he knows how strong the coal lobby is and didn’t think the gap would be so large. He added: “I am very concerned for these kids. I look at my kids and wonder how I would react and what solutions I would have, so it tears me apart to be honest.”

Many people take measures into their own hands, choosing to wear masks long before COVID hit and installing air cleaners. Szewczyk is lucky because she is in the position where she can move.

She said the local and national government talks about change, but is not acting on it.

“I’m really tired,” she said. “We tried so, so hard, and for so many years, and nothing moved and nothing changed at all.”

Polish energy production is extremely reliant on coal with 74% of its electricity coming from coal power stations in 2018. Last year, it was the country in Europe with the highest consumption of coal, according to Eurostat.

Szewczyk wants the government to take air pollution as seriously as COVID and strongly suggest citizens wear a mask and don’t burn rubbish.

That change must be replicated in society, where her neighbours “burn trash, plastic and even clothes”. Her children were “ashamed” to wear masks pre-COVID.

“The parents and some of the teachers, they think it’s not a problem. People lived twenty, thirty years ago in worse air pollution and are still alive. That’s their argument, a silly argument, but they say things like that,” she said.

The World Health Organisation found that Polish cities were 36 of the 50 cities in Europe with the worst air pollution.

The research below is being presented Saturday (10 October) in Rybnik by documentary-maker Martin Boudot and the lead scientist, Tim Nawrot, with a recording available here.