Construction site machinery is responsible for a significant amount of air, noise, and climate pollution yet remains remarkably unregulated. The ongoing recast of the EU Clean Vehicles Directive offers a golden opportunity to address this, writes Mark Preston.

Mark Preston is a Policy Assistant at the environmental NGO Bellona. With its headquarters in Oslo, Bellona is currently helping to decarbonise construction sites in Norway and is now seeking to replicate these advances in the EU.

Construction is a fundamental component of human civilisation. It lies at the heart of economic and social development. Indeed, the construction industry generates roughly 9% of European GDP and accounts for 18 million jobs.

Combined with increasing urbanisation trends and a fast-growing global population, it goes without saying that construction is here to stay.

This calls for the adoption of timely policies and measures at the local-, national- and EU levels to encourage the transition to zero emission technologies and processes across the full construction supply chain.

Machinery at construction sites are the largest source of emissions and represent the 3rd largest share of a building’s lifetime greenhouse gas (GHG) emissions. In fact, they are responsible for 18% of Oslo’s total emissions, and more GHG emissions than Germany’s domestic rail and air travel combined.

Additionally, the air pollution from construction machinery contributes to the more than 500,000 annual deaths related to poor air quality. In London, these machines account for approximately 7.5% of the city’s NOx emissions, 8% of large particle matter PM10, and 14.5% of fine particle matter PM2.5.

As any city dweller will attest, the noise of construction site machinery contributes greatly to the nuisance of an already loud environment. Studies estimate that around 10,000 people die every year as a result of noise pollution due to sleep disturbances, hypertension, and high stress levels.

To address this issue, the City of Oslo is already implementing procurement standards requiring the use of zero-emission machinery wherever possible. As a result, construction of a kindergarten is currently underway under these standards. Electric machinery is therefore already a reality, helping to reduce emissions in the Norwegian capital, while reducing ambient noise and air pollution in a sensitive area. Bellona, along with other partners, is helping in the pilot design of electric cement mixers and excavators.

These efforts must be replicated in Europe by encouraging public authorities to capitalise on their purchasing power and decision-making potential, thereby fostering the innovation and market required to accelerate the industry’s decarbonisation.

There is no specific piece of EU legislation to date targeted directly at construction machinery emissions. The emission standards set by the Non-Road Mobile Machinery Regulation are broad and necessary; however, they are not stringent enough and result only in incremental efficiency improvements which are both slow and insufficient to decarbonise the industry in line with our climate objectives. 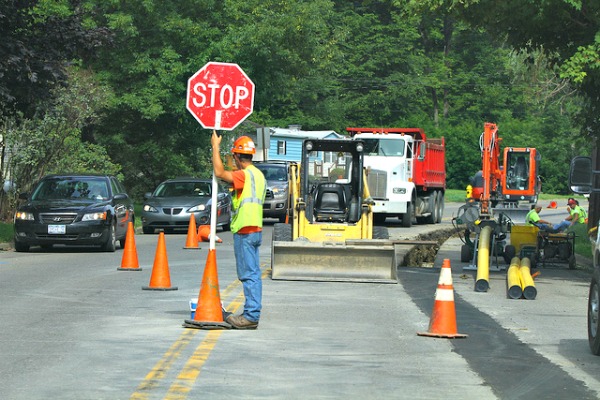 EXCLUSIVE / Large diesel-powered machines responsible for toxic emissions in Europe’s urban areas will not be obliged to limit emissions of ultrafine particulate matter (PM) by using particle filters, and will not need to report their CO2 emissions, under key parts of a draft EU law seen by EURACTIV.

While the EU, along with 194 other signatories of the Paris Agreement, have committed to keeping temperature increase to within 2°C – and aiming for 1.5°C – compared to pre-industrial times, the lack of policy to follow through with this commitment is worrying. While emission standards are supposed to be the ‘stick’ (this remains to be seen), we must provide a ‘carrot’ if we are to actually clean up European air and meet European climate targets.

As such, the recast of the Clean Vehicles Directive, which pushes public authorities to decarbonise their fleets via minimum procurement targets, offers a rare opportunity to address the oft-ignored sector of construction machinery.

The purpose of widening the scope of the CVD is to create a market for a technology which already exists. Several machinery manufacturers have developed electric models which boast higher efficiency rates, lower operating costs, low noise pollution, and zero tail-pipe emissions of air and climate pollutants. Bellona recently ran an event at the European Parliament inviting several industry representatives, along with representatives from the European Commission and local authorities.

They all agreed that while the technology exists and electric machinery presents several clear benefits compared to conventional powertrains, the market has yet to embrace the next-generation of equipment.

Including construction machinery within the CVD also presents synergies with the recently adopted Energy Performance of Buildings Directive, which enforces the pre-tubing of charging points in newly constructed and renovated buildings as a minimum prerequisite. Electric machinery at the construction site could encourage contractors to go above and beyond in the installation of private charging points in buildings, providing a much-needed boost to the adoption of electric vehicles in the EU.

Since transport is currently the only economic sector in the bloc whose emissions are still rising, measures to increase electrification are desperately needed if the EU is serious about meeting its allegedly ambitious climate targets and tackling the increasingly urgent issue of ambient air quality.

The full report is available here.

Noxious emissions from everyday cars and trucks have long been regulated at European level. But the European Commission believes pollution from so-called non-road mobile machinery – which includes everything from bulldozers to chainsaws – is a problem and is proposing new emission limits on them.