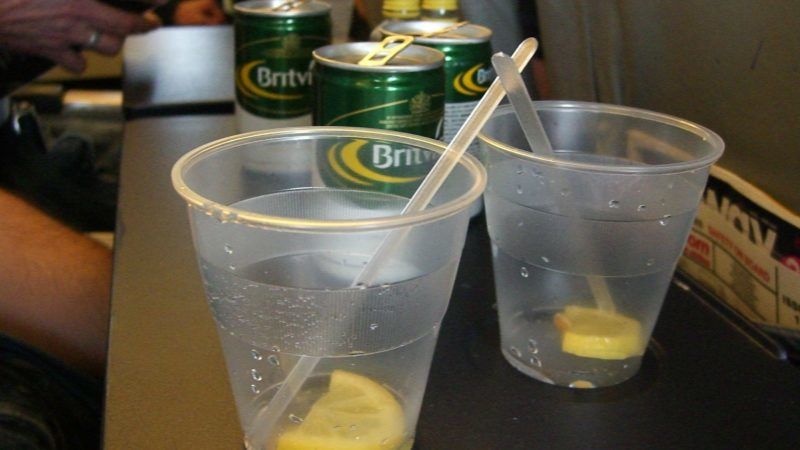 The crew can decide to limit or stop selling alcohol during flights. [Russell James Smith/Flickr]

The European Commission does not intend to limit alcohol consumption during flights as it is a national competence, despite the fact that officials from popular tourist destinations requested its intervention.

Alcohol sometimes turns vacationers violent on flights. The situation has become so serious for some local authorities that they requested a helping hand from Brussels.

But the EU institutions have no plans to intervene, and instead have deferred the headache to national governments and airlines.

An EU official explained that Brussels has no competences to limit or ban the sale or consumption of alcohol at EU airports or during flights. It is a national competence “exclusively”, the official added.

Cases are becoming more visible as videos of couples having sex in their seats or drunk passengers being expelled by security personnel go viral on YouTube.

For Pilar Carbonell, responsible for tourism in the regional government of the Balearic Islands, the problem is so serious that she sounded the alarm bell this week.

“We ask the central government and the European Commission to ban the consumption of alcoholic drinks on flights and in airports,” she said.

“The aim of the measure is to improve passenger security and also that of security forces in planes and airports in our islands, who are often faced with drunk passengers,” she wrote in a statement.

Authorities in the Balearic Islands, home to the party resorts of Ibiza and Magaluf, on Wednesday (12 July) asked Spain and the European Union to ban alcohol on flights and in airports as they battle “anti-social tourism”.

The Balearic Islands are a popular destination for vacationers from across Europe. But British tourists seem to be involved in many of the incidents reported.

As a result, the UK is also considering toughening the rules to buy alcohol at airports. A House of Lords committee said that the Licensing Act, which controls the selling of alcohol, should apply also at airports.

At EU level, there is only a recommendation included in the European Aviation Security Rules. It says that the airline “shall take all reasonable measures to ensure that no person enters or is in an aircraft when under the influence of alcohol or drugs to the extent that the safety of the aircraft or its occupants is likely to be endangered”.

Industry sources explained that the crew currently controls the alcohol consumed during flights. They can decide to limit or stop the sales of alcohol if they detect that a passenger is intoxicated or the situation is getting out of control in the cabin.

Passengers are not allowed to get drunk by using their own alcohol, even for bottles bought in duty-free shops.

Crews are becoming better trained to identify intoxicated passengers who are not “fit to fly” and to deal with them en route, a source explained.

In the event a drunk traveller is forbidden to get on board, they are not entitled to compensation under EU law.

Once on board, if a passenger becomes very disruptive, some airlines will first give two verbal warnings.

If the problem continues escalating, the final step is a written warning on behalf of the captain. This warning will mention a handover to the police and maybe even a diversion.

The captain has the right to disembark passengers. As the “pilot in command”, he is the ultimate authority to ensure the safety of the aircraft, according to the Chicago Convention on International Civil Aviation.

But some are more supportive when passengers are boozing in their planes.

Announcement on flight to Kansas City congratulates the entire aircraft for wiping them completely out of booze. Yep, it's a Raiders flight.

So far, the issue is not “a big concern” for airlines, sources commented. But it is still a problem, especially when the pilot has to divert the plane.

While legislation remains lax in this field, carriers have limited tools to avoid troublemakers embarking again.

Each company has its own ‘black list’ of passengers, and they don’t always spot unruly travellers, especially if they are boarding from different airports each time.

Member states could ban the sale of alcohol at airports, as they do in certain places or for some sports events. They could also forbid airlines registered in their territory to offer alcohol, as happens with some third countries’, including Iran Air flights.

But until that day comes, complainants such as Carbonell will have to rely on flight crews or hope that inebriated passengers will opt to sleep en route to their destinations.