Asselborn: We will kill Schengen if border restrictions persist 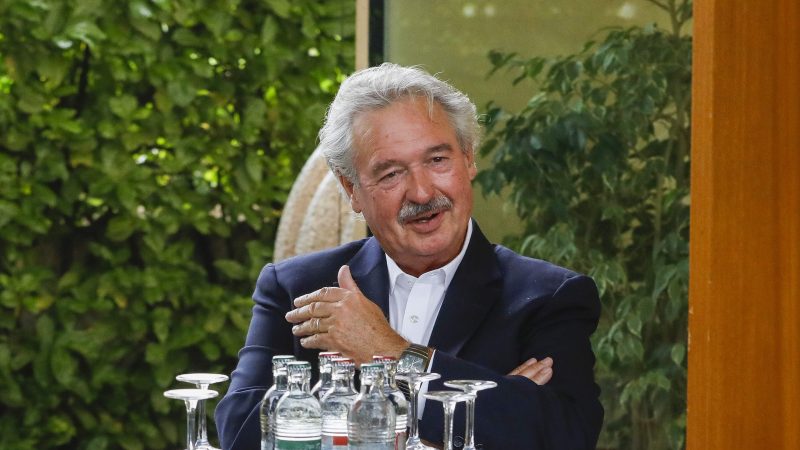 Rejecting the idea of ‘deportation centres’ that would host Afghan refugees in Central Asia, Luxembourgish Foreign Minister Jean Asselborn told EURACTIV in an interview the EU holds enormous responsibility towards those who “helped us build an embryo of rule of law” in Afghanistan.

He also said EU-wide efforts to draft a European migration policy are clearly “stuck” and warned that the EU’s borderless Schengen area is being seriously jeopardised by the restrictions 10 member states have imposed on their borders.

Jean Asselborn has served as the Foreign Affairs Minister of Luxembourg since 2004. He spoke to EURACTIV on the margins of the Budapest Forum in Hungary on Thursday (16 September).

You have been known to clash with your colleagues over migration, a topic still very much at the top of the agenda. It’s a huge issue here, in Budapest, but also for the EU. Do you see the Migration Pact going anywhere in the near future?

No, clearly not. I think we are stuck and I really don’t understand why. You know, in 2015, Luxemburg had the presidency of the Council of the EU, so I have seen the situation from inside, so to speak. There was a vote on relocalisation that year also, that I decided to organize, and what I proposed at that time about migration was completely feasible. Some countries chose other options, hence our failure on migration, among other things.

We failed to adopt a European migration policy. Take Lithuania for example. They are facing an unprecedented migration wave coming through Belarus. Countries such as Greece, Spain, Malta, Italy and other countries that have a part of the external border of the EU have the same problem. One could also say that they feel a certain solitude as they are not heard by the EU. I have to say here that [Hungarian Prime Minister] Orbán bears a huge responsibility. EU citizens don’t want illiberalism, they want liberalism, that’s to say democracy. Because at the other end of the illiberal tunnel there is autocracy.

And I think that the great majority of migration is not in Europe, so we shouldn’t talk about invasions. It’s wrong. In 2020, the number of migrants coming to the EU is only one-tenth of the 2015 figures. Today, around 100.000 per year migrate to Europe and it’s completely manageable if we make our action revolve around two notions: solidarity and responsibility.

People talk about Schengen and you have to understand that everyone wants to keep Schengen in place, especially Eastern European countries. But 10 Schengen countries out of 26 decided to impose restrictions at their borders. And if restrictions become the new rule, then we will kill Schengen. What citizens expect from the EU is broadly speaking the Euro and Schengen. People all around the world envy us.

Yes, Erasmus too, obviously. This is extremely important for young people. But all of this could fall apart should the notions of solidarity and responsibility disappear.

Speaking of migration, Afghanistan has clearly been the centre of focus. Will the situation there make Central Asia more strategically important for the EU? Because historically, it has not been at the top of the agenda.

I would like to bring a nuance here. I remember the German presidency of the EU in 2007. Steinmeier was, at that time, minister of foreign affairs. He went to all Central Asian countries. I’ve always perceived it as very complex but we do not have the right to let them down in Central Asia.

About Afghanistan, it is wrong to say that it is up to Central Asian countries to solve the Afghan crisis and the subsequent migration crisis. We can’t possibly think that if we close our borders to those poor people that are fleeing for their lives we are going to solve anything. Europe has an enormous obligation to help those who helped us build an embryo of rule of law in Afghanistan, as well as their families. There are journalists, there are female judges. I don’t understand why the EU wouldn’t help.

To give you an example, I have granted a laisser-passer to a woman who left Afghanistan through Uzbekistan. She has little chance of obtaining asylum here in Hungary so, as we speak, she is with our driver who is driving her to the airport where she will take a plane to Luxembourg. These are small actions that we must do. She is 26 and totally alone, she needed help.

We have additionally accepted the family of a judge, another one contacted us but she is hiding in Kabul with her family, so it’s complicated but we’ll try to find a solution.

I really think that the EU must be present and sensitive to those who in the name of the EU and democracy are in danger. It would be unfair that they suffer because they did what we asked them to.

About migrations, you see, in 1938, Mrs [Golda] Meir said “we are not talking about figures, we are talking about people”. For me it’s a matter of basic humanism. If we don’t tackle this issue with humanity, we won’t ba able to tackle it at all.

So I take it you are not a fan of the ‘deportation centres’ idea that would host Afghans near Afghanistan, like your Austrian counterpart has suggested

Von der Leyen’s State of the Union speech was heavy on defense but lacked detail. What’s your take on it?

As MFA, I know that foreign affairs are linked to defense. Synergies would be welcome within the EU. Not a competition with NATO but a complementarity. Mali is a good example.

Even the Americans would be happy to see a European Union Force. But unfortunately, I don’t think that I will live long enough to see the creation of a European Army. The goal is to have a better cooperation between the different defense structures in Europe.