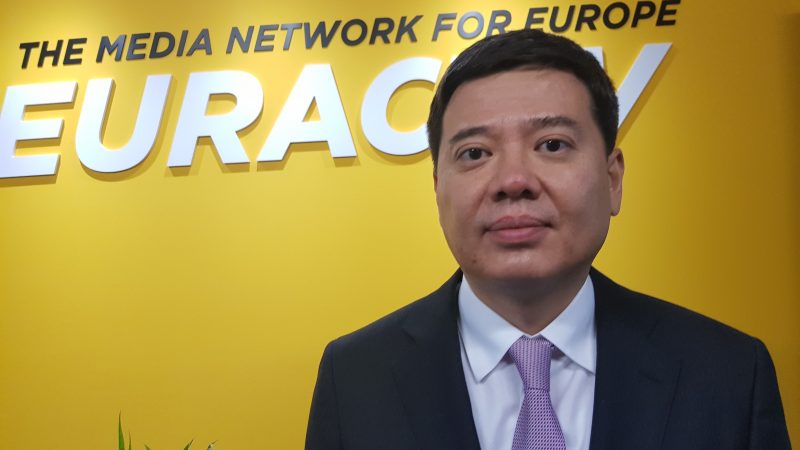 Justice minister of Kazakhstan Marat Bektaev in the EURACTIV office in Brussels on 30 September 2021. [Georgi Gotev]

We are speaking in Brussels, can you tell us with whom you have met?

I am here to meet officials in the EP, in the EC; mainly, we are here to inform our partners about reforms in Kazakhstan, particularly in the field of human rights. We want to raise awareness in Brussels in the EU about investment opportunities in Kazakhstan and the protection of property rights – these are the main topics of my two-day visit.

You mentioned the European Parliament, has the climate improved since a resolution was passed in February that was highly critical of the human rights situation in Kazakhstan, possibly as the result of some aggressive lobbying?

Indeed, this resolution was quite a surprise for us. It was done at a time when many reforms were done in Kazakhstan, new laws were adopted, improving the situation with human rights, and suddenly came this resolution. We realised it was not enough to decide something and implement it, but also to inform our partners in Europe and America.

Who did you meet in the EP?

The Ambassador (Baimukhan Margulan) suggested inviting everyone, especially those who are most critical of Kazakhstan. And that was done, some of them agreed to come. It was not an easy conversation, but we had an opportunity to tell our part of the story. We didn’t agree on everything, but we found common ground on many topics. Also, as a country, we are not limiting ourselves to meeting officials. We also meet NGOs, not only here but also in Washington, online, on a regular basis.

Can you name these NGOs?

Human Rights Watch, Amnesty International. The big ones, the most active, the most influential.

Kazakhstan has an excellent track record in maintaining good relations with its neighbours and with global players. Is Kazakhstan’s experience with conflict resolution and conflict prevention interesting for your EU partners?

We could talk about these issues for hours. But you have to bear in mind that I am not a diplomat…

But you are; I’ve seen your CV…

I used to work for the foreign office for a little while. But now, I consider myself a lawyer. To answer your question, we believe in constructive dialogue in transparency, and once you have that, you have a sound basis for establishing good relations with the global society. It was a concept established by our first president (Nursultan Nazarbayev) of multi-vector policy, of multi-vector diplomacy. We cannot limit ourselves to the neighbouring countries, and we are big enough in terms of territory, economy, and our positions to talk openly to all the global players. Unless we do so, we won’t be able to develop our country the way we are doing at the moment.

Closer to your portfolio, let me ask you about the multi-billion court cases that are sometimes reported in the world media. One of them, the Stati case, was called “one of the biggest frauds in the history of international arbitration”…

I could say that out of 23 cases brought by different organisations against Kazakhstan, we won 10 cases fully, four cases are still ongoing, seven cases we lost, and two cases were settled. But when we are talking about losing particular cases, we have to bear in mind that what was given was not the full amount; it’s 10, 20, 30% of the initial claim. And we promptly paid all the cases, but one, the Stati case.

We believe we have the capacity in the country to deal with arbitration cases, in terms of human resources, in terms of funding, to find the best lawyers, and in terms of the legal system in general. Let me explain. All the cases were brought in relation to events that were happening before 2010 – the late 1990s, early 2000s. The system then wasn’t sophisticated enough to deal with investments in a proper diligent way. If you were to get a contract for an oil field, you have to have relevant resources: engineers, infrastructure, financing relevant to this particular oil field. But in the early independence days, these regulations were not in place, and sometimes companies without experience and capacity were given such contracts. Some of them went into investment disputes. But now, we are no longer allowing companies without experience of capacity to operate in our economy.

In addition to that, our bureaucracy is much more flexible and capable of conducting negotiations. The world is not perfect, and sometimes we have disputes with our investors. Our bureaucrats are well prepared to negotiate and find compromise solutions with investors, and I can give many examples. This allows avoiding costly arbitration. When it comes to arbitration, we have qualified people, highly educated, fluent in English, to represent our position in arbitration or in court. This is big and responsible work, and we are capable of doing it.

Regarding the Stati case, they initiated arbitration against Kazakhstan under the EU-supported Energy Charter Treaty (ECT), is this a misuse of legislation put in place for a good purpose?

I fully agree, there are some so-called investors who are abusing mechanisms designed to protect investors, but these mechanisms aren’t perfect. For example, the Energy Charter Treaty doesn’t allow governments to bring counter-claims. This is a flaw in the mechanism, and we raised this issue with the ECT, and we are in discussion with them on how these problems could be fixed. Regarding the Stati case, we are in dispute not only with the Stati, but with bondholders, financial institutions which bought those bonds from Stati, and when they discovered that Stati had committed fraud and stole money from them, instead of suing Stati, they decided to cooperate with him. This is a classic Ponzi scheme when a victim engages in cooperation with a criminal to defraud yet another victim. This is what we believe is happening now, and we are prepared to continue all the legal work in the courts. It is already public that a number of countries have started criminal investigations, all considering evidence provided by the government of Kazakhstan. For example, Luxembourg has already started their own criminal investigations.

It is also important to know that although legal disputes take place in the courts, the Stati took this dispute out of the court to the media. We have to react. It’s not us who started this media campaign. We are only reacting.

What is your perception of the international climate as we are slowly emerging from the COVID pandemic? There are new geopolitical tensions, we read, for example, that big projects in which Kazakhstan has expressed interest, such as the Belt and Road, are facing hurdles?

Every crisis is an opportunity. Of course, Kazakhstan was hit by the pandemic like all the other countries, but this year we expect growth of 3.75%, which is a good achievement. We observe that new industries start to emerge, especially IT. We are thinking about what could be done to boost this growth in Kazakhstan. We realise that we are competing with our neighbours for FDI, and this could be done only by providing better conditions for investors. You know about our first President’s initiative – the Astana International Financial Centre, which is governed by English law, and all the judges are English judges. They have heard already more than 100 cases, and the arbitration centre under the auspices of AIFC has administered more than 400 cases already. This is a good result in itself, a good opportunity not only for foreign investors – but national investors are also very happy using these mechanisms to resolve their disputes.

If we are quick enough to take niches on the market, this will give growth to our economy. Nowadays, with the development of technologies, it’s not a matter of human resources anymore. It is more about energy resources. If you want to operate a modern plant, most of the work will be done by robots. And for robots, you will need energy resources. This is exactly what Kazakhstan could exploit. We have energy resources, and we are limited in human resources, we are only 19 million people.

Another obstacle for us is that we are a landlocked country. We could be producing at much lower prices in case we had access to sea routes. But again, with the advance of technology, it’s becoming cheaper and cheaper to transport. We are welcoming any initiative which makes our products competitive. It doesn’t really matter what route they will take. More affordable air, cheaper rail, or the Elon Musk truck – which is announced but not yet produced. Transportation means a lot for us. The cheaper it gets, the better for us.