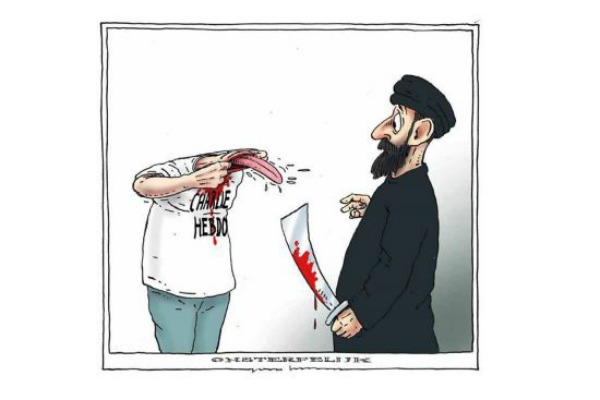 SPECIAL REPORT: The Charlie Hebdo atrocity has given cartoonists a renewed sense of mission, even if they sense more danger, according to graphic art professor Vincent Baudoux. However, the situation is very different in the Middle East, and the internet – capable of beaming cartoons around the world instantaneously – is posing new challenges to Western cartoonists.

Vincent Baudoux is a professor at the Ecole de Recherche Graphique des Instituts Saint-Luc de Bruxelles, where he specialises in press cartoons. He has curated numerous exhibitions including the 2007 Quick et Flupke, ketjes de Bruxelles to celebrate the centenary of Hergé. He answered questions from EURACTIV’s Jeremy Fleming.

How much has there been a change of atmosphere for cartoonists working in the aftermath of the Charlie Hebdo atrocity?

For our cartoonists here in Western Europe, much has changed, but at the same time little has changed. The atmosphere is different, because there is now a certain fear, which was not the case before the Charlie Hebdo murders. At the same time, cartoonists have decided to keep working as usual, because to do otherwise would be to send a signal to the radical extremists that they have the ability to influence events and to impose their views.

The recent event on press freedom in the Bozar in Brussels saw some differences of opinion, do you think it is fine if some cartoonists choose to avoid sensitive subjects?

Being a cartoonist in some countries (for example certain Muslim countries) is dangerous, because religion is linked to political power, so any criticism of any authority whatever is considered to be a form of delinquency. Therefore, many of these cartoonists choose to avoid any kind of political reference. One of them said, “With each cartoon, I am handing them my head on a plate.” On the other hand, Western European cartoonists appreciate more than ever the freedom they have to work on sensitive subjects. Here in the West the political world generally appreciates the work of cartoonists because it is necessary in the context of societies enjoying open and pluralistic media, particularly with regard to images. We must remember that Europe too had its period of iconoclasm, to which the Roman Catholic church responded with all the exaggerated profusion of the Baroque period.

Do you think editors have a duty to consider the safety of their staff, as well as freedom of expression, when considering what cartoons to publish?

Yes, of course, editors do have a responsibility to protect their staff, but the cartoonists themselves think more in terms of freedom of expression than in terms of their personal safety, because they believe that they are protected by public opinion and by democratically elected powers. In the case of Charlie Hebdo, the cartoonists exercised their freedom of opinion – to the point of provocation – knowing that their building was protected by the police. Let’s remember that a policeman lost his life as well as the journalists.

Why is technology making it less easy for cartoonists to control their own content?

This is a really important question because it raises the issue of clashes between cultures. Firstly, the internet means that a cartoon which is intended for a local readership in the West can be seen within seconds all over the world in completely different cultures with completely different values. So something which is innocent here can become something dramatic elsewhere. Also, it is so easy with current technologies to make alterations to the original cartoon, such as changes in the wording of the caption, or additions or cuts to the drawing in order to modify its meaning. However, the cartoonist remains responsible because the cartoon still bears his signature.

What future do you see for the European tradition of the satirical cartoon?

I don’t think that anybody can answer this question truthfully. Nobody knows how to predict the future. I would add that every social system has always believed that it is immortal, but history proves to us that this is not true. History also shows us that things move far more rapidly than people expect. If you can’t adapt to change, you disappear. Our Western model is based on wasting energy – is this sustainable? A cartoonist has no more power over history than over the future.