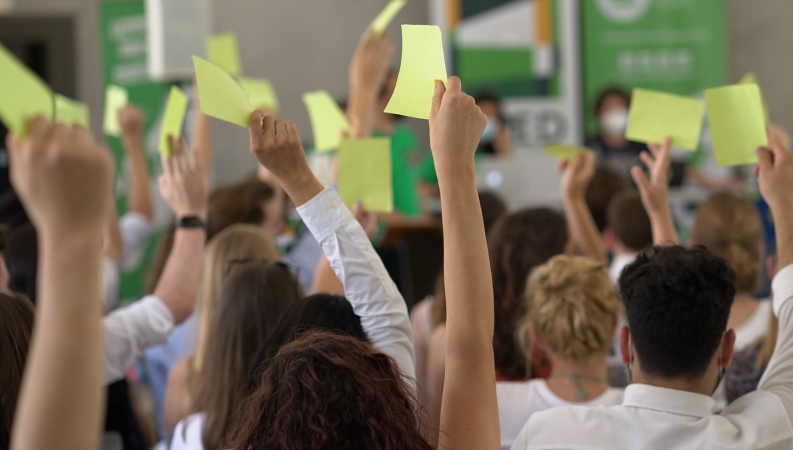 The EU-wide exercise on the future of the bloc could give new impetus to the federalist-minded group in the European Parliament who have been struggling in the past years to connect with young Europeans.

The Conference on the Future of Europe has so far received widespread criticism for its potential to turn into a largely futile exercise of the Brussels elite speaking to itself.

“I’m a bit concerned that it would be just a communication tool and not a tool that really allows citizens to be involved and people everywhere to really embrace the European sphere”, Gwendoline Delbos-Corfield told EURACTIV. She is part of the Spinelli Group gathering federally-minded lawmakers in the European Parliament.

To involve real people in the discussion the EU institutions will organise citizens’ panels gathering 200 randomly selected Europeans while reflecting the EU’s diversity. However, many fear this will not be enough.

Delbos-Corfield expressed scepticism about the ability of the conference to advance the European agenda.

For the Spinelli Group, the challenge is for the conference to not become “a chat between MEPs who live in the Brussels bubble, don’t get out of it and convince themselves of things that they are already convinced of”, the green MEP added.

Delbos-Corfield described one of the first meetings of the Spinelli Group in the current parliamentary mandate, in 2019, which was supposed to make the transition between the older and newer members as very “concerning”. This was due to a lack of younger lawmakers of the previous generation, long and boring speeches as well as gender imbalance.

“I felt it was my duty to go to the Spinelli group, but I wasn’t that enthusiastic, to be honest,” she told this website.

In her view, the conference can give a new purpose to the group, which for years was a “bit of federalist think tank next to the Brussels bubble”.

“What I can say is today, we have new energy on the age point of view, there has been real renewal,” she added, stressing, however, that “we are still not there.”

The change is reflected in the composition of the group’s board. A quarter of its 16 members are women, four are aged under 37. In comparison, only one MEP was under 37 in the previous parliamentary mandate.

That one young MEP was a social democrat from Italy, Brando Benifei, who now chairs the Spinelli group.

For Benifei, nationalists want to reduce the debate on the future of Europe to a discussion where we seek the “least common denominator”.

In contrast, he said, his group needs to show an alternative to citizens and open a “real conflict” of ideas, allowing Europeans to choose a path forward.

According to him, one way forward is to usher in the age of more enhanced cooperation, which would see a coalition of willing member states integrate further in areas where there is a will to move forward, which is seen in many but not all EU countries.

Asked if this could lead to more fragmentation, he said “we already have a multi-speed Europe” with many exemptions and opt-outs and the bloc cannot afford to wait for a consensus on all issues.

Meanwhile, while Brussels is trying to involve citizens in the debate on the future of the bloc, some Europeans took matters into their own hands.

Last month, a group of European youth travelled to a simulation in Brussels that implemented a new bloc constitution written by their peers for a dry run of a possible new Union, with federal institutions.

“I was not that engaged with federalism, but I wanted to see how it works,” said Anaïs Faucher, a European law student who helped to organise the event and took part in it as president of the lower chamber of parliament.

Describing the simulations as the “greatest experience of my life”, she remained sombre about the likelihood of achieving federated European institutions in the near future.

“I think it’s very utopian right now because people see federalism as a loss of nationality and community,” she told EURACTIV.

Nevertheless, she said, a federated union could be even more effective at protecting national minorities because a more general structure could represent “little scales” better than states, which tend to leave minorities “blurred out”.

Lamenting the power member states still wield, she said federalism is ultimately about decision-making. “It’s not about just everyone being the same, it’s about acting together way stronger,” she said.