People leave the polling station after voting in a referendum on the country's name change, at a polling station in Skopje, The Former Yugoslav Republic of Macedonia (FYROM), 30 September 2018. [Georgi Licovski/EPA/EFE]

With ballots from 93% of polling stations counted, 91.3% of votes cast Sunday favoured the deal with Greece to change the name of the Country to North Macedonia, compared to 5.7% opposed, according to the electoral commission’s official count.

Resounding Yes in the referendum in Macedonia, but turnout at the end of the day disappointing. Road ahead more tricky, but important to press on. pic.twitter.com/0hess0auZM

However, only a third of the electorate voted. The electoral lists of 2002 put the number of voters at 1.8 million, but this number is several hundreds of thousands higher than the present-day Macedonian population.

The low turnout was anticipated and the authorities in Skopje had suggested they were prepared to accept as legitimate the referendum’s result even with 40% participation. 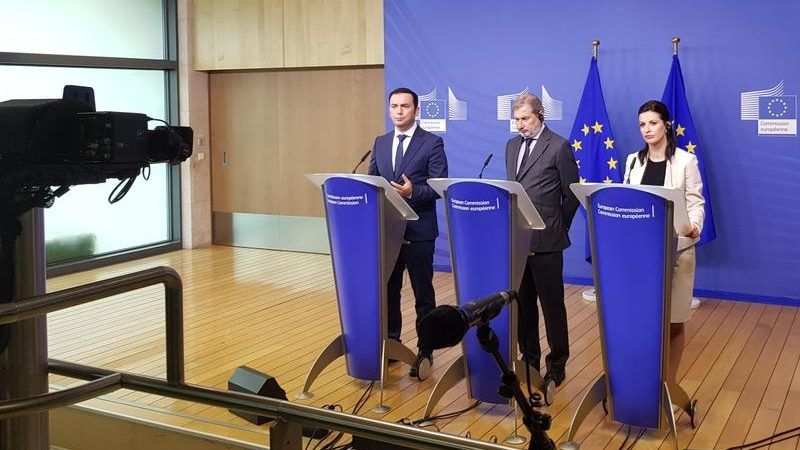 The ballot was closely watched by Greece, which said it “remains committed” to its June agreement with Skopje under which Athens would drop its objections to Macedonia joining the EU and NATO in return for a change of name.

Greek Prime Minister Alexis Tsipras expressed his support for his Macedonian counterpart in a telephone call in which he hailed the “determination and courage” of Zoran Zaev to “complete the implementation of this agreement”, a government source told AFP.

The EU Commissioner for Neighbourhood and Enlargement Negotiations Johannes Hahn called the “yes” vote “very significant” and urged political leaders to “respect this decision and take it forward with utmost responsibility”.

Referendum in ??: I congratulate those citizens who voted in today's consultative referendum and made use of their democratic freedoms. With the very significant "yes" vote, there is broad support support to the #Prespa Agreement + to the country's #Euroatlantic path. 1/2

I now expect all political leaders to respect this decision and take it forward with utmost responsibility and unity across party lines, in the interest of the country. 2/2

I welcome the yes vote in ?? referendum. I urge all political leaders & parties to engage constructively & responsibly to seize this historic opportunity. #NATO’s door is open, but all national procedures have to be completed.

Washington also welcomed the outcome, with the State Department urging lawmakers “to rise above partisan politics and seize this historic opportunity to secure a brighter future for the country as a full participant in Western institutions”.

The U.S. welcomes the results of the Republic of #Macedonia’s Sept 30 referendum. We strongly support the Agreement’s full implementation, allowing Macedonia to take its place in @NATO and the EU, contributing to regional stability, security, & prosperity. https://t.co/FaBKpi7JaF pic.twitter.com/N9Ik6FyosI

The non-binding referendum on renaming Macedonia needs to be ratified in parliament by a two-thirds majority and also given the stamp of approval by the Greek parliament.

Zaev and his coalition partners from the ethnic Albanian minority will need at least a dozen MPs from the opposition to back the move.

“MPs now have an obligation to make Macedonia a better place for all of us,” Zaev told reporters late on Sunday.

However, the party that ruled Macedonia for a decade until 2017 was split during the referendum campaign. Mickoski did not vote, but several MPs took part in the polls, including the party’s vice-president Mitko Janchev.

According to Mickoski, the citizens are Macedonia are in favour of EU and NATO membership, but against the Zaev-Tsipras deal.

Zaev said that if he failed to obtain the required majority in parliament to back the name deal, he would call early elections, two years after the last ones.

Around 1,000 opponents of #Macedonia's 'name' deal w/ Greece are celebrating in Skopje tonight after today's referendum failed to reach the 50% threshold of voter turnout required to make it legally valid.

Around 35% of eligible voters took part.

The vote is an emotional moment for a country that has struggled for recognition of its name since 1991, when the former Yugoslav republic declared independence.

At the time, Athens kicked up a major fuss, accusing Skopje of stealing the name of its own northern province, which is also called Macedonia.

The dispute dives deep into history with both countries vying to lay claim to Alexander the Great’s ancient empire of Macedon, which spanned their territories.

Zaev had billed the referendum as a painful but “historic” opportunity to break a 27-year-old stalemate.

The June deal, however, was openly opposed by Macedonia’s President Gjorge Ivanov, who is allied with the nationalist opposition and had supported calls for a boycott of the referendum.

Few Macedonians are enthused about the new name, saying they have been unfairly bullied by Greece.

“I am not happy and I do not know anyone who likes this deal,” said 55-year old Danica Taneska, who voted “no”.

But a desire to anchor their future to the West — and the economic prosperity that it could bring — has been a driving force behind the “yes” vote in one of Europe’s poorest nations.

The referendum is not binding, but a “yes” majority gives parliament a political mandate to change the constitution.

Europe and the US have campaigned hard for the deal, with many leaders passing through Skopje this month to urge Macedonians to seize the “historic” opportunity.

NATO has already issued an invitation — on hold until the deal passes — while EU accession talks are scheduled to begin next year.

The West is keen to have another foothold in the Western Balkans, a region where Russia, which is opposed to NATO expansion, has historically had influence.

At home, those in favour of the deal say a desire for an EU future is helping bind ethnic Macedonians with the Albanian minority, who are broadly pro-West.

Unlike the Slav population, ethnic Albanians, less concerned about the country’s name, voted massively in the referendum.

According to Florian Bieber from the University of Graz, it is important whether the opposition will be moderate, as the West suggested in its meetings with Mickoski.

Considering that turn out for last 16 years has been well below 70%, a credible argument could be made that with 90% yes & turnout of approx. 35% a majority voted for agreement.

Reportedly Western politicians who came to Skopje ahead of the referendum talked to him as well.

Biber also thinks it is important whether Russia will challenge the outcome.