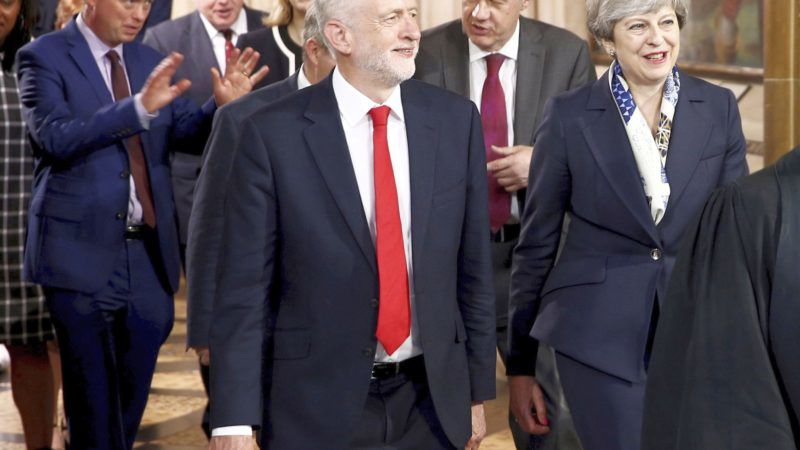 Prime Minister Theresa May and Labour leader Jeremy Corbyn arrive in Westminster for the start of parliamentary year in Britain on 21 June 2017. [EPA/Stringer]

Lord Andrew Adonis has urged UK Labour leader Jeremy Corbyn to call for a second referendum so the British public can have their say on the final Brexit deal.

In an exclusive interview with British newspaper The Independent, the former Labour Transport Secretary said it would become “increasingly difficult” for Corbyn to stand “shoulder to shoulder” with Theresa May on Brexit.

Instead he called on the Labour leader to endorse a second referendum so the electorate could decide whether they want to accept the final trade deal with the EU or opt to stay in the trade bloc.

“I’m rather hoping that Jeremy Corbyn will move in the direction of a referendum on the final terms, because it is going to become increasingly difficult for him to stand shoulder to shoulder with Theresa May when the living standards of ordinary and hardworking Brits are being trashed,” Lord Adonis told The Independent.

However, 8 out of 10 Labour members oppose the party leadership’s opposition to a second referendum on an eventual Brexit deal, according to a poll of over 4,000 members of the U.K.’s major political parties.

The survey by the Mile End Institute at Queen Mary University in London, published Thursday, found that 78% of the Labour grassroots either agree or strongly agree with having a second vote — something Labour leader Jeremy Corbyn has ruled out.

The former Prime Minister described the party’s current position as “mistaken” and warned that voters would not find Mr Corbyn’s approach “credible”.

Highlighting senior figures in the current Labour leader’s top team, including John McDonnell, Mr Blair claimed they had apparently made contradictory remarks on the party’s stance.

He concluded that Labour’s “timidity”, alongside Tory right-wingers, would ultimately be to blame if Britain leaves the EU.

Lord Adonis has also been critical of Mr Corbyn and his stance on Brexit in the past and after the general election in 2017 he called on the Labour leader to step down saying “leaders who lose a first election virtually never win a second”.

When asked about his thoughts on the current cabinet, Lord Adonis, said there was “quite a long list” of ministers that he believed were not doing their jobs well.

He argued that “about half” would not be in their position if Britain had not voted to leave the European Union and Ms May should consider sacking them.

“I don’t think there are many people who think that the Foreign Secretary [Boris Johnson] has done a brilliant job in representing the country abroad,” Lord Adonis told The Independent.