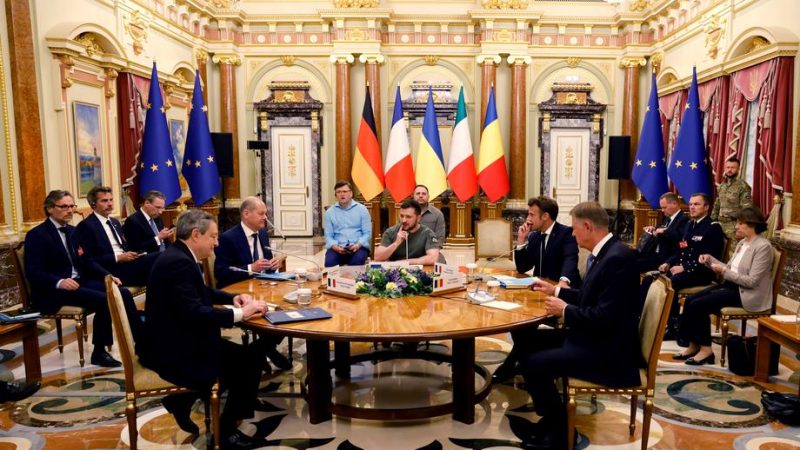 France, Germany, Italy, and Romania are all in favour of Ukraine receiving “immediate” official status of an EU candidate, leaders of the four EU countries said on Thursday (16 June) during a visit to the war-torn country struggling to repel a massive invasion launched by Russia.

“All four of us support the status of immediate candidate for accession,” French President Emmanuel Macron told a joint press conference with German Chancellor Olaf Scholz, Italian Prime Minister Mario Draghi, and Romanian President Klaus Iohannis, who all arrived by train in Kyiv earlier on Thursday.

Arriving on a night train as air raid sirens blared in Kyiv, the leaders started the visit by touring the nearby suburb of Irpin wrecked early in the war.

After holding talks with Ukrainian President Volodymyr Zelenskyy, the leaders signalled that Ukraine should be granted EU candidate status.

The European Commission is expected to publish its opinion on Ukraine’s candidate status on Friday (17 June), which leaves EU leaders roughly a week to study the document before they are to decide on the matter at a crucial EU summit on 23-24 June.

“The European Commission will set the framework for the discussion and decisions will be taken by the Council next week,” Macron said.

Scholz and Macron were among the last EU leaders to visit Ukraine since Russia’s invasion started on 24 February and previously were criticised for being too cautious and not offering enough support to Ukraine.

The French president declared that he was in favour of granting immediately the candidate status to Ukraine, associated with a roadmap that would also take into consideration the Western Balkans and Moldova.

Scholz, who stressed earlier in the day the leaders were not going to Ukraine only to show solidarity but also to bring concrete commitments, also voiced explicit support for granting candidate status to Kyiv – and for the first time also to Moldova.

“We have come to Kyiv today with a clear message: Ukraine is part of the European family,” he told reporters.

“The same goes for Moldova as well,” Scholz said, adding that Germany had taken in 800,000 Ukrainian refugees and would continue to support Ukraine as long as it needs.

As a decision in favour of candidate status will require unanimity among the 27 member states, Scholz said he would “work towards a joint position” across the EU.”

Meanwhile, he also warned not to neglect the Western Balkan states on their slow-paced journey towards EU accession in the process. “Here we finally need to follow through on our promises.”

Macron also stressed the EU would need to prepare for these upcoming enlargements “by modernising its structures and procedures.”

He also recalled that France “scrupulously” followed through with its promises in terms of weapons deliveries and intends to deliver even more weapons to Ukraine than originally planned.

In addition to the twelve Cesar canons France promised to Ukraine, Kyiv will receive “six additional Cesar canons” to protect itself from Russia.

“[President] Zelenskyy knows that it is a way forward, not just a step,” said  Italy’s Draghi.

Italy, which last year sourced 40% of its natural gas imports from Russia, has also proposed a peace plan which Ukrainians fear could lead to pressure on them to give up territory.

It was not immediately clear, however, what conditions would be attached to Ukraine’s EU candidacy bid, but it is likely that the bloc might request strict requirements on rule of law, institutional reforms, as well as the fight against corruption, before agreeing to formally launch accession talks.

Zelenskyy promised Ukraine was ready to put in the work to become a fully-fledged EU member, and said Ukrainians have already proved themselves worthy of candidate status.

“Ukraine has gotten the closest to EU it has ever been in the history of its independence,” he said later in his daily address.

At the same time, Zelenskyy said the leaders “understood” that, 113 days into the war, peace talks with Moscow had stalled “exclusively because of the position of Russia.”

“They don’t want it. This is an aggressor, it needs to decide for itself that the war needs to be ended,” he said, adding that he explained to the visiting leaders “our essential needs in the field of defence.”

After the talks in Kyiv, Macron had said some sort of communication channel was still needed with Putin.

In Brussels, asked about the three leaders’ visit to Ukraine, NATO Secretary-General Stoltenberg called it a “message of solidarity” that would reinforce everything already being done by European governments in terms of support and sanctions.