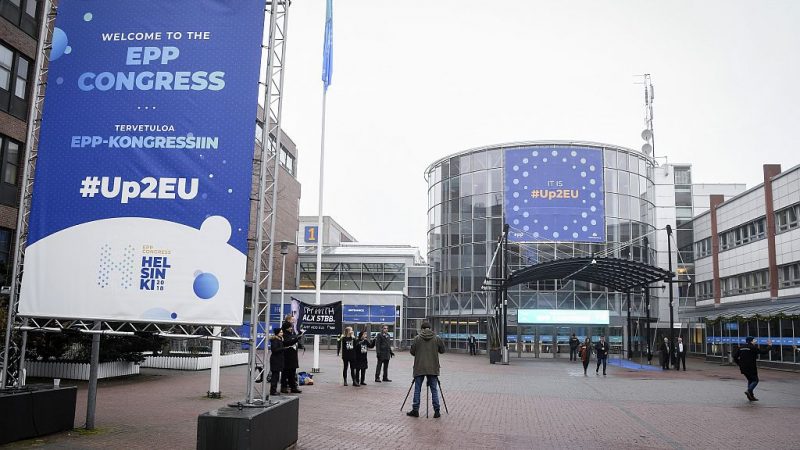 Venue of the 23rd EPP Congress in Helsinki, Finland, on 7 November 2018. [EPA-EFE/KIMMO BRANDT]

The position of some in the European People’s Party, the biggest political group in the European Parliament, and particularly its Spitzenkandidat Manfred Weber, has long been ambivalent, extending at best to vague support for the deal that is vital for stability in the Balkans.

For the sake of accuracy, EURACTIV is publishing the verbatim transcript of a conversation between Mr Weber and EURACTIV reporter Gerardo Fortuna, as well as some other journalists, which took place after Mr Weber’s media briefing on 9 January. At no point did Mr Weber or his press team interrupt or indicate that he was talking ‘off the record’.

The SoundCloud recording is available here.

Weber answered: “We are in a process, the proposals are on the table now and everybody knows this has to be solved to give Macedonia a positive economic and European future.”

[Another journalist followed up]: Does New Democracy know that this has to be solved? If their votes will be needed in the Greek plenary will you pick up the phone?

Following the publication of the article, Weber tweeted: “I fully respect the sensitivity of the Greek people on the name issue with FYROM. There was no interview on this topic. I respect the stance of @kmitsotakis and I strongly believe that he will lead Greece to stability and prosperity by tackling populism.”

Kyriakos Mitsotakis is the leader of the biggest Greek opposition party, EPP-affiliated New Democracy. He has publicly called on Greek political parties to reject the name deal reached by prime ministers Alexis Tsipras last June, after almost 30 years of dispute.

During a visit to Athens on Thursday (10 January), German Chancellor Angela Merkel said she was “grateful” to Prime Minister Tsipras for his efforts to find a solution to the name dispute.

“The solution will not only benefit Greece and ‘Northern Macedonia’ but also Europe as a whole,” Merkel said.