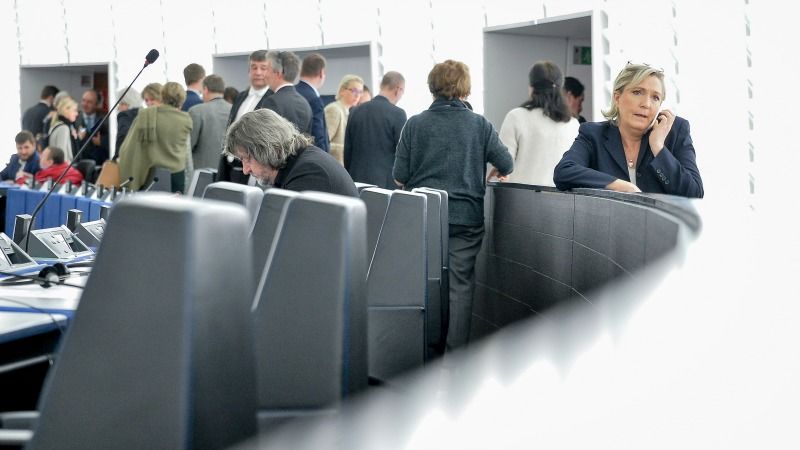 France’s far-right party accused authorities of staging a media stunt to influence the presidential election after police searched its headquarters in an investigation into “fake jobs”.

“It looks on the face of it like a media operation whose goal is to disturb the course of the presidential campaign,” the National Front said in a statement.

The European parliament has said that, in her role as French National Front leader, Le Pen had during the 2011-12 legislature paid party staff with EU funds, which EU rules say should be used only to pay EU lawmakers’ assistants.

Le Pen has  defied a deadline set by EU authorities for her to repay funds, estimated at around €300,000.

Reportedly, the money went to Catherine Griset, a close friend of Ms Le Pen, as well as to her cabinet director. The funds were conditional on Griset spending most of her working time doing parliamentary work in Brussels or Strasbourg but the parliament says most of her time was instead spent working in the National Front’s headquarters in Paris.

French judges opened a fraud investigation on 15 December after prosecutors handed the dossier over to them following a preliminary investigation of more than a year.

“This is as void as space,” the party’s vice-president Florian Philippot told BFM television, adding that searches had taken place a year ago and nothing had been found then.

“These are media-stunt searches on the day when she (Le Pen) gets a 2-point bounce in the polls. It’s always when the system is in panic that these affairs come out.”

An Opinionway poll of voting intentions on Monday (20 February) had Le Pen easily beating her four main rivals to win the April 23 first round with 27% of the vote.

In the second-round two-way runoff against Macron or Fillon, she was still seen losing, but both scenarios saw her narrowing the gap.

She would lose against Macron with 42% to his 58, while against Fillon she would be defeated with 44% to his 56, the poll showed. A week ago she was polling around 36-37 against Macron.

It is not clear what impact the probe could have on Le Pen or how quickly the investigation will move forward.

But the French bond market reacted nervously to the latest opinion poll showing Le Pen had increased her chances of being elected.

The premium investors demand to hold French bonds instead of German debt rose to its highest since late 2012 on the announcement.

Investors seem concerned about her anti-euro stance, among other factors.

Benchmark German Bund yields were pinned near 0.29%, with the spread to French equivalents at one stage around 84 bps – the biggest gap since late 2012.