By Vlad Makszimov | EURACTIV with Reuters

Belarusian President Alexander Lukashenko makes a speech, as he attends the first Belarusian Nuclear Power Plant (Belarusian NPP) during the plant's power launch event outside the city of Astravets (or Ostrovets) in the Grodno region of Belarus, 07 November 2020. [EPA-EFE/MAXIM GUCHEK / POOL]

Belarusian strongman Aleksander Lukashenko hinted on Friday (27 (November) he would step down once the new constitution is adopted. He said he supports a new Constitution, “not because some kind of democracy is needed” but because giving it to “an unknown president” in its current form would cause trouble, state news agency BelTa reported.

“We have a very serious Constitution. Kazakhstan, Russia, we are probably the three advanced states that have such a serious, tough constitution, where everything depends on the president’s decision,” Lukashenko said at a meeting with the staff of a clinic in Minsk.

“I do not make any Constitution for myself. I will not work with you as president with the new Constitution,” he said.

“So calm down, take it easy. And when adopting the new Constitution, I will never allow anyone to forge or fabricate elections” under it, he added, without elaborating or specifying when the new constitution would be in place.

Protests, often crushed by special forces, have rocked the country demanding Lukashenko’s resignation every weekend since the 9 August election, which he claims he won.

Protesters believe Svetlana Tikhanovskaya, who took her jailed husband Sergei’s place in the presidential race, was the true winner. 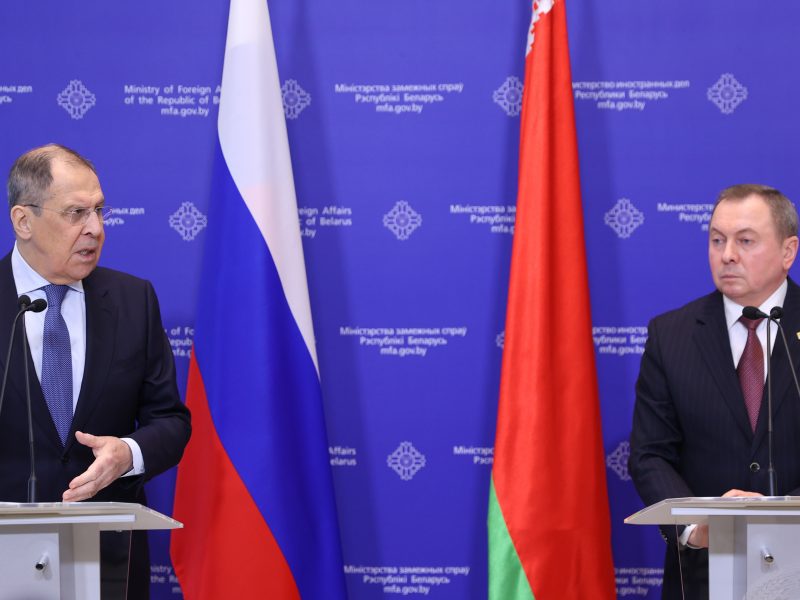 Russia’s foreign minister on Thursday (26 November) accused the West of interfering in Belarus as he met strongman leader Alexander Lukashenko who has faced months of protests over his disputed re-election.

Tikhanovskaya’s supporters said on Friday they would lobby state prosecutors in several European countries to investigate accusations of torture by Belarusian authorities.

Western countries have accused Belarusian security forces of using excessive force in their crackdown on the protesters and have imposed sanctions targeting specific officials.

“It’s terrible in Belarus, and I don’t think anything similar is happening anywhere in Europe. We need outside help”, Maksim Kharoshyn told a news conference in Vilnius, saying he had been beaten by Belarusian police while in detention.

A petition filed with Lithuanian prosecutors on Kharoshyn’s behalf asks them to investigate several officials including Belarusian Deputy Interior Minister Nikolai Karpenkov in the case, said Alexander Dobrovolski, an adviser to Tikhanovskaya.

Dobrovolski said similar requests would be sent to prosecutors in Poland, Germany, Belgium and the Netherlands, where other alleged victims of Belarusian police beatings now reside.

Belarus denies torturing prisoners and says its police show restraint in dealing with protesters, who it has said are in league with hostile foreign powers.

Lithuania’s criminal code punishes state-sanctioned torture by up to five years in jail. It allows for the prosecution of foreigners for crimes allegedly committed outside the country.

Tikhanovskaya is now based in the Lithuanian capital but was not at Friday’s news conference.