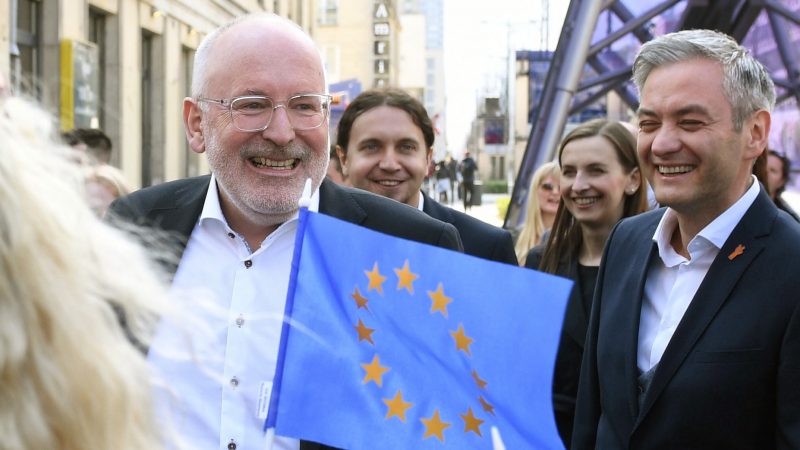 A coalition of Polish opposition parties on Saturday (6 April) launched its campaign for May’s European elections by warning that the governing eurosceptic PiS party could drive the country out of the European Union.

The PiS government has stoked tensions with the EU by introducing a string of controversial judicial reforms that Brussels says pose a threat to judicial independence, the rule of law and ultimately to democracy.

Warsaw has since backed out of some of the controversial legislation, but the opposition is still concerned that the PiS government’s clash with Brussels could pave the way to a “Polexit”.

“Either (we have) a strong, prosperous, democratic Poland in a strong Europe or what we have today — a party state — on the way to leaving the European Union,” said Grzegorz Schetyna, leader of the liberal Civic Platform (PO), the largest of five opposition parties in the European Coalition (KE).

The Scare v. The Big Lie. The campaign to the European Parliament in Poland revolves around the weekends, when all the major political blocks try to impose a new narrative. This weekend is no different. #Gimme5EU https://t.co/gz8Wu34mgf pic.twitter.com/D951sdYXsR

“Either a Poland that is one of the leaders of the West, or Poland a drifting to the East,” he said at a convention in Warsaw launching the coalition’s campaign ahead of the European vote to be held 26 May in Poland.

Poles are overwhelmingly EU-enthusiastic, with nearly 90% backing membership of the bloc that has given the country billions of euros in subsidies, turbo-charging its economic development.

Although the PiS has never called for Poland to leave the EU, it is pushing for a more decentralised bloc.

The elections to the European Parliament will be a key test for all EU governments and especially so in Poland, where a general election is expected later this year.

Schetyna also laid out a series spending promises including higher spending on health and education and financial support for young employees.

He further vowed to combat Poland’s problems with smog by limiting coal use.

The populist PiS has focused its campaign on bread-and-butter issues like expanding its already generous social spending measures by vowing to increase a child allowance it launched after taking office in late 2015.

It made good on promises to boost pension benefits for seniors on Friday by voting through an extra annual payment.

An IBRIS poll published Friday put the PiS ahead with 39% compared to 36.5% support for the European Coalition.

Powerful PiS leader Jaroslaw Kaczynski has long been a fierce critic of the strong brand of EU federalism championed by EU powerhouses Germany and France.

He is among a growing number of populist leaders in the EU advocating a reform agenda for the bloc that favours national sovereignty over federalism.