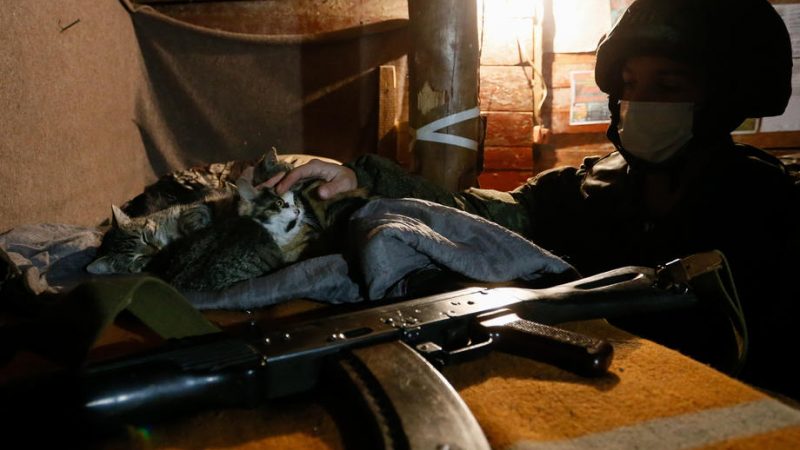 File photo. A soldier of the self-proclaimed Donetsk Peoples Republic (DPR) plays with cats in a shelter on a front line near the pro-Russian militants controlled city of Horlivka, Ukraine, 24 November 2020. [EPA-EFE/DAVE MUSTAINE]

Russian mercenaries have deployed to separatist-controlled eastern Ukraine in recent weeks to bolster defences against Ukrainian government forces as tensions between Moscow and the West rise, four sources have told Reuters.

In recent weeks, Russia has moved tens of thousands of regular troops to staging posts closer to Ukraine and followed up by demanding urgent security guarantees from the West designed, Moscow says, to prevent Ukraine and other neighbouring countries being used as a base to attack it.

The West and Ukraine have for their part accused Russia of weighing a fresh attack on its southern neighbour as soon as next month, something Moscow denies.

Russia annexed the Crimean Peninsula from Ukraine in 2014 and backed pro-Russian separatists who seized a swathe of the industrial Donbass region of eastern Ukraine that same year, and continue to fight Ukrainian government forces there.

Of four sources, three described their offers from mercenary recruiters to go to Donbass. They said the recruiters did not disclose who they represented. All four sources declined to be named, citing fears for their safety.

Two of the three sources said they had accepted; the third said he had refused.

“There is a full house. They are gathering everybody with combat experience,” said one of the two who accepted.

He said he had previously fought in Ukraine and Syria for groups of Russian security contractors whose operations have been closely aligned with Russia’s strategic interests. He declined to identify the contractors.

The fighter said he was planning to join up with fellow mercenaries on the Russian side of the border with the separatist-held Luhansk region in eastern Ukraine.

The Kremlin says it has nothing to do with private Russian military contractors whose operatives it describes as volunteers with no connection to the state.

Kremlin spokesperson Dmitry Peskov said: “It’s the first we’ve heard of this and we don’t know how reliable these assertions are.”

Peskov said there were no Russian regular forces or military advisers in eastern Ukraine and never had been, and that Moscow was not considering sending any. Kyiv disputes that and says regular Russian army forces are present.

Alexander Ivanov, head of the Community of Officers For International Security, a non-governmental group representing Russian contractors in the Central African Republic, said he had “not a single confirmation” that any Russian mercenary had been deployed to Ukraine.

Three of the sources said they were not aware of any plans for a new Russian attack on Ukraine or of preparations that would suggest one was coming.

One of the sources, a contractor who has taken part in Russian operations abroad and had already arrived in eastern Ukraine, said the deployment was for defensive purposes. The first mercenary said the same.

Another source said he was not directly involved in the deployment, but was in touch with people on the ground who were undergoing special training. He said the aim of the deployment was what he called sabotage activities to undermine stability in Ukraine.

The Donetsk People’s Republic (DPR) proclaimed its independence from Ukraine in 2014 after separatist fighters took control of a slice of eastern Ukraine. Backed by Russia, its self-proclaimed status has not been recognised internationally.

Alexander Borodai, ex-prime minister of the DPR and head of the Union of Donbass Volunteers, said his organisation was not involved in the recruitment of any mercenaries for eastern Ukraine.

Members of his organisation have previously fought in Ukraine and Syria.

“If and when it’s needed, we’ll call people – but there has been no call for now,” said Borodai, who is also a lawmaker for Russia’s ruling party, United Russia.

Separatist spokesperson Eduard Basurin said he knew nothing of any recent Russian deployments of security contractors to eastern Ukraine.

Ukraine’s military intelligence service declined to comment, while the state security service did not reply to a request for comment.