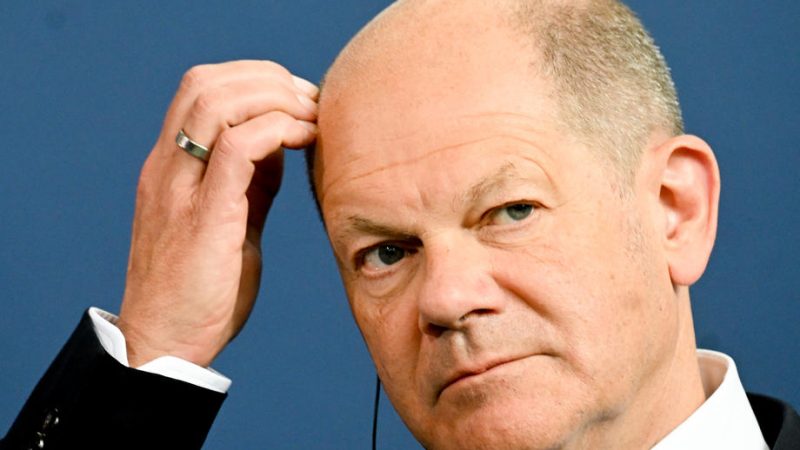 The election result is also a crushing defeat for German chancellor Olaf Scholz himself. Scholz tried to play a prominent role during the election campaign, as his party hoped that they could benefit from his “chancellor bonus” to mobilise voters. [FILIP SINGER/EPA]

The German Social Democrats suffered a crushing defeat in Sunday’s (15 May) state election in Germany’s most populous state, North Rhine-Westphalia, and lost to the conservative CDU. The Greens were able to triple their vote and logged a historical result in the election.

According to current projections, the conservative CDU won the election with over 35.7 % of the votes. Scholz’s SPD only managed to attract 26.7 % of the votes, the worst ever performance in North Rhine-Westphalia (NRW), which has long been considered the Social Democrat’s heartland.

However, despite the historical loss, the Social Democrats were reluctant to concede defeat in the state home to almost 18 million people.

“We are not dissatisfied with the result,” SPD General-Secretary Kevin Kühnert told ZDF regarding the performance of his party. “It will be possible to bring about a change of government in NRW.”

The SPD lost around 260,000 votes to the Green party, who managed to triple their election result to over 18 % and is considered the biggest winner of the election.

Their performance puts the Greens in the comfortable position of kingmaker, as the incumbent coalition between the CDU and the liberal FDP lost its majority.

“It is not possible to form a government past us,” Green lead candidate, Mona Neubaur, said after the election results came in.

The liberal FDP also suffered major losses and attracted only 5.9 % of the votes – less than half compared to 2017.

“We have suffered what must be called a disastrous defeat tonight,” party leader and Finance Minister Christian Lindner, who also acted as former lead candidate in NRW, said in Berlin.

The election result is also a crushing defeat for German chancellor Olaf Scholz himself. Scholz tried to play a prominent role during the election campaign, as his party hoped that they could benefit from his “chancellor bonus” to mobilise voters.

However, while the election was primarily overshadowed by federal issues and the war in Ukraine, the focus on chancellor Scholz did not lead to the expected results for the SPD.

Three of the four most significant topics that shaped voters’ decisions were the Ukraine war itself or related issues, such as inflation or energy supply.

The Greens especially benefited from voters’ attention to federal and international politics. Over 90 % of Green voters believe that the party has the best policies in the federal government.

It is already the second election within two weeks, where the Greens were able to outperform their Social Democrat coalition partner.

Already on May 9, the SPD suffered a big defeat in the northern state of Schleswig-Holstein, where the Green even managed to gather more votes than the Social Democrats.

The SPD also lost ground in the federal election polls, where the CDU is currently leading with around 28 %, followed by the SPD with 22.8 % and the Greens with 17.8 %, according to EURACTIV’s partner Europe Elects.