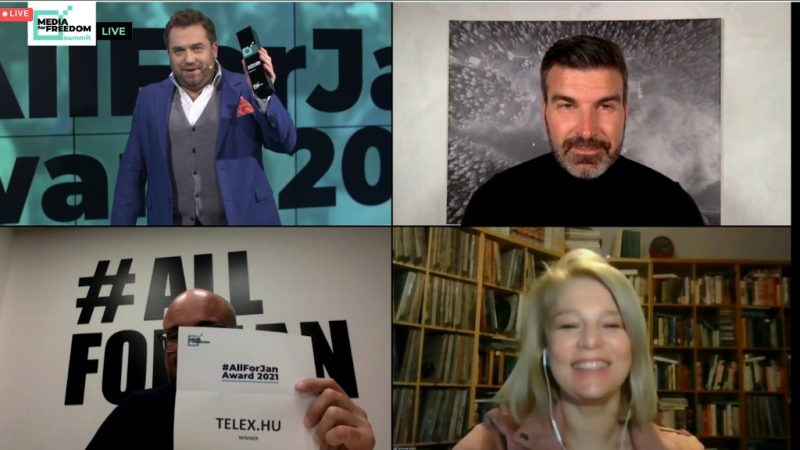 EURACTIV’s media partner, Hungarian news site Telex, was awarded the #ALLForJan prize, established in honour of the murdered Slovak investigative journalist Ján Kuciak, based on their advocacy of the freedom of the press and their work over the past several months.

Telex was launched in 2020 by journalists, editors and product staff who collectively resigned from Index.hu after the ousting of the market-leading site’s editor-in-chief,

Kuciak was murdered in 2018, along with his fiancée, while working on a fact-finding report that looked into the infiltration of a prominent Italian mafia organisation, the ‘Ndrangheta, into Slovakia, and its business activities that reached politicians in the larger ruling party.

The award is open each year to journalists from Central and Eastern Europe who remain devoted to values such as openness and courage and report without compromise on critical social issues.

“With hundreds of thousands of readers and the recognition of an international jury, perhaps even the Hungarian government will begin to heed our voice,” Telex editor-in-chief Veronika Munk said in her acceptance speech.

Despite the site’s significant social impact and readership, government actors still prefer to ignore it, not replying to the inquiries and questions from Telex staff.

“Our audience is growing. We are committed to fact-based, impartial journalism, which we plan to continue for decades to come,” said Munk, stressing that the award is another confirmation of the importance of standing up for their core journalistic values.

Although the news site is only four months old, its daily readership of 500,000 demonstrates just how much fact-based journalism is needed in Hungary.

“Journalism is only successful when people trust it, especially in times that don’t favour the truth and the facts. The staff at Telex.hu are playing a crucial role in their country,” said Peter Bárdy, jury chairman for the award and editor-in-chief of Actuality.sk.

The award, established by Ringer Axel Springer Media, is being presented to journalists in Central and Eastern Europe for the second time. Last year, Tomasz and Marek Sekielski received the award for “Tell No One,” their documentary about sexual abuse of children in Poland.