The Brief ¿ No pasarán ? 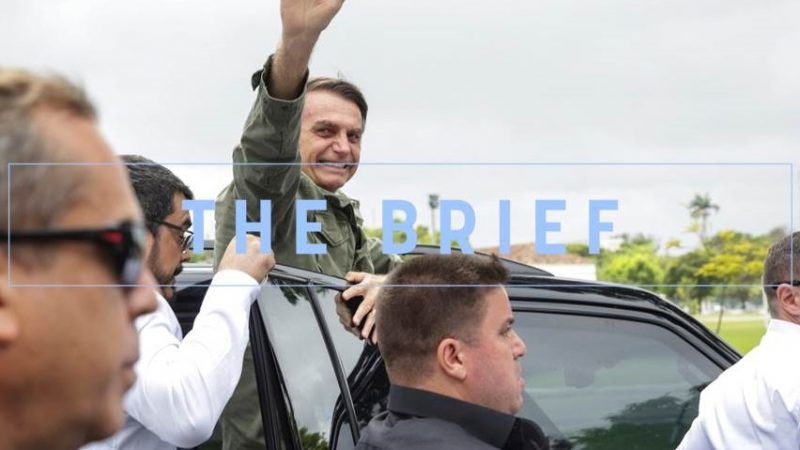 Brazil, the largest country of Latin America and the fourth largest democracy, elected a racist, misogynous and homophobic Trump-like politician, sparking fears for the future of the Amazon rainforest, the global climate and the mental state of mankind.

What a bizarre trend: democracies electing dictator-type politicians… Turks re-elected Erdoğan with a perspective for him to rule until 2028, Hungarians keep re-electing Orbán, Salvini’s rating in Italy is skyrocketing.

There is a trending appetite for authoritarianism, in a world that should normally remember Nazism and fascism. Putin, the leader of a country that can hardly be called democratic, finds many admirers in the EU. And the UK self-inflicts Brexit, also because the voices against it were too weak.

Are the leaders from the mainstream parties, the traditional centre-right, centre-left and the centrist liberals so hopeless that they are overwhelmed by the far right? And whenever they try to do something about it, why is it always in the direction of imitating the far-right, rather than proposing alternatives?

What has happened to the immune system of our societies? Many assumed that crass populists and would-be dictators would get “no pasarán”, but Bolsonaro proved them wrong. Is the far-right international becoming the new normal?

Bolsonaro won the Brazilian elections on the same day when the symbol of the European liberal mainstream, Angela Merkel, announced that she will no longer stand for party chairmanship, for Chancellor, and would no longer run for the Bundestag. Merkel also indicated she has no plans for any EU top job, contrary to some rumours in the couloirs.

Merkel kaput is really bad news for Macron, who needed a strong Chancellor in Berlin to help his push for a much-needed reform of the EU and the Eurozone. Weakened by national problems, Macron will need to scale down his European ambitions.

Marine Le Pen is not in a good political condition either, but opinion polls suggest she could actually send more MEPs to the European Parliament than Macron in the May 2019 European elections.

This will not be the end of the world, Le Pen already sent more MEPs than any other French political force in France already in 2014. More than ever, Europe needs credible political forces to stop the brown tsunami.

The Greens have lately scored well in Germany, in Belgium and in Luxembourg. This is a sign of hope. When politicians are closer to the people, and when they are fighting for solutions for the entire planet, that’s already a good start.

A fresh blow for Chancellor Angela Merkel in the regional elections in Hesse prompted the SPD party leader to question the future of the national ruling coalition. Meanwhile, Austria’s Conservatives see confirmation of their political course through this. Is this the dawn of the German Chancellor?

The rejection of Italy’s draft budget by the Commission is unprecedented in the history of the Stability and Growth Pact. Member states cannot sit idly by but must take a more active role in the political conflict over fiscal sovereignty, writes Reinout van der Veer.

The ongoing trade dispute is an instrument of cold economic warfare launched by the US to “contain” China, and it could lead to the fragmentation of the global economic and financial system.

News from Bucharest is concerning: Romania will soon take over the rotating Council Presidency but at the same time a tug of war is going on between the social-democrat government and the judiciary. A publisher of two Bulgarian newspapers denounces pressure on few remaining free media in Bulgaria.

Faced with the upsurge in xenophobia in Europe, MEPs want to take firm action against neo-fascist and neo-Nazi groups, which currently benefit from a certain level of discretion in several countries.

Russia, Germany, France and Turkey stressed the importance of a lasting ceasefire in Syria, and said a committee to create a new constitution should meet by the end of the year. The family picture caused mixed feelings.

Brazil also faced elections during the weekend. Far-right Jair Bolsonaro won Brazil’s presidential bid, promising to clean up politics – but alarmed many with vows to sweep political opponents off the map and comments denigrating women, gays and racial minorities.

Ahead of COP24, only sixteen countries out of the 197 that have signed the Paris Agreement have defined national climate action plan ambitious enough to meet their pledges.

Big brands – from Coca Cola to Kellogg – pledged to cut all plastic waste from their operations in what the United Nations called the most ambitious effort yet to fight plastic pollution.

The fifth Our Ocean Conference in Bali focused on generating commitments and taking actions to maintain the sustainability of our oceans.