The Brief, powered by EK – No turkey please, we’re vegetarians 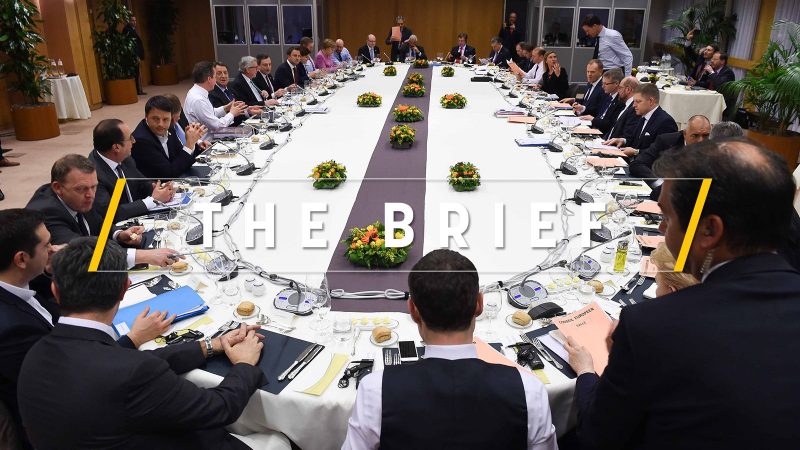 Believe it or not, EU leaders didn’t discuss Turkey’s war adventure in Syria at the two-day summit. War crimes are allegedly being committed by the Turkish army, ethnic cleansing is ongoing (obviously), but the leaders looked the other way.

They adopted ready-made conclusions to express solidarity with Nicosia over Turkish plans to drill for gas in the Cyprus territorial waters, but did not discuss Turkey’s invasion in Syria at all, said Bulgaria’s Boyko Borissov, one of the leaders at the summit table.

Instead, leaders spent six and a half hours discussing unsuccessfully how (not) to deliver on the promise made to Skopje for having made the biggest effort in history for opening the EU membership perspective.

This longest discussion on EU enlargement in history remained inconclusive. And in a way, it marked the end of enlargement as we know it.

Instead of the main course, EU leaders had a salade Macédoine. Indeed, the EU, as a geopolitical player, is more and more vegetarian in a world of carnivorous species, such as Turkey, the US, Russia or China, to name but a few formidable beasts.

And the EU displayed all its might against tiny North Macedonia, instead of showing some teeth to Turkey. In the meantime, the US, which may no longer be the perfect ally for the Europeans, at least under Donald Trump, succeeded to obtain a five-day truce in Syria.

Some of the EU’s unglorious leaders may claim that they were in support of North Macedonia and Albania’s EU ambitions. But none could credibly say that he or she stood firmly against the horrible war acts committed by the Turkish army and its local allies in Syria.

Not so long ago, ethnic cleansing took place in the former Yugoslavia, and the European Communities looked the other way. The horrifying siege of Sarajevo ended thanks to American fighter jets and a peace agreement signed in Dayton, Ohio.

Many years have passed, but the European Union is still unable to respond to military threats, ethnic cleansing and war crimes in its own neighbourhood. Having the Americans sorting out things in your backyard is not always wise, to say the least.

Ursula von der Leyen has called her (yet to be assembled) Commission “geopolitical”. Easy to say, difficult to achieve.

Message from the Confederation of Finish Industries (EK):

Finnish business wants to secure an efficient climate policy. The EU should reach net-zero CO2 emissions by 2050. We need to significantly reduce emissions, and to use carbon sinks and capture to balance the rest of the emissions. This can be done with new technologies. Emissions need a global price tag, so that there is an incentive to reduce them as well as to develop and deploy cleantech innovations.

After a long night of inconclusive discussions, EU heads of state were set to return to the EU enlargement issue, but while all eyes were on France, it did not happen.

Have a look here at reactions across Europe regarding the deadlock in opening EU accession talks for North Macedonia and Albania.

The British pound had a tumultuous session as a draft Brexit deal between London and Brussels sparked both hope and skepticism in a volatile forex market.

Brexit negotiations drive everyone mad, there was not a wink of sleep to be had and in the end is ANYONE glad? Out Tweets of the Week are a Brexit special this week.

Two crucial dossiers for the EU’s future need to be rubber-stamped by the European Parliament in the next two months, the Brexit deal and the approval of the new EU executive.

In normal news, the United States imposed tariffs on a record $7.5-billion worth of EU goods, despite threats of retaliation, with Airbus, French wine and Scottish whiskies among the high-profile targets.

While Europe is a leading force in the world for research, historically it has lagged behind competitors when it comes to turning that research into innovative businesses. The new European Commission of Ursula von der Leyen hopes to change that.