The Brief – The untold Brexit story 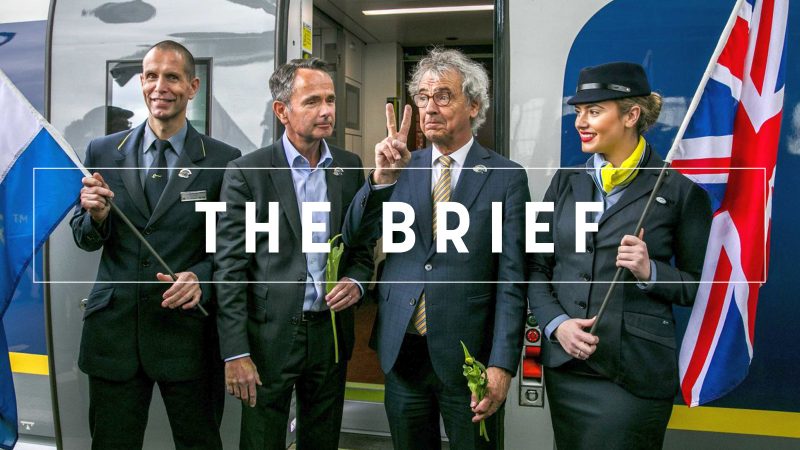 The Brief is EURACTIV's evening newsletter. In the photo: Managers of Dutch and UK railways gesture after the first London-Amsterdam Eurostar train trip on 4 April 2018. [Remko de Waal/EPA]

There are hundreds of articles about the impact of Brexit on UK businesses. What is striking is that there is virtually nothing similar about its impact on European businesses. As if Brexit would only hurt the UK side. While the EU stands to profit from it. We don’t buy that.

The same applies to hard Brexit, the divorce without a deal. Many depict the mayhem in the UK, the expected hardships for the Brits, overlooking that the separation without clear rules would also create problems the EU side. And it’s not only about the EU nationals in the UK, we’re talking about hundreds of millions of Europeans.

The exit of the United Kingdom, the Union’s second largest economy, is tantamount to the simultaneous exit of the 19 members with the smallest economies. So let’s be serious: there will be huge consequences for both sides.

And the fallout, for both sides, would be much worse in the case of a hard Brexit. The chaos will be such that everyone would lose, except law firms.

This narrative, about the downside on the UK side only, largely results from the EU’s negotiating tactics. It’s not that the France-led process (Barnier is key here) directly seeks to punish Britain, maybe just a little bit. But it certainly wants to convey a very clear message to others that divorcing the EU is a very bad idea.

On the UK side, the only strategy seems to be that the EU knows how bad hard Brexit will be also for its own interest and will make a better last-minute offer. But we don’t buy this who will blink first scenario either.

Both sides have tried to find allies among the big businesses. The Brussels side has certainly hoped that the UK’s big business would find a way to put pressure on their negotiators in order to avoid hard Brexit. There may have been such pressure, also as a result of the hundreds of publications, but there has been no result.

But on the EU side, such pressure is almost inexistent. Only now the French employers’ association MEDEF seems to wake up, but this is too little, too late.

Brexit was a very bad idea, but what is definitely worse is sleepwalking into hard Brexit. The EU is right to insist on the Irish backstop. But in case of hard Brexit, there will be no backstop. There will be a hard border for the Irish and for everyone.

Missed the hottest topics from around Europe this morning? Have a look at today’s The Capitals edition with the Romanian socialists feeling the heat of the Kövesi case, Barnier Jnr to run for Macron list and a far-right displeasure in Berlin.

Relations between Bucharest and Brussels hit an all-time low as the Romanian press reported that the Commission First Vice President Timmermans and Justice Commissioner Jourová are under investigation for “falsification” of the last rule of law progress report.

School kids are on climate strike “because we have done our homework” and listened to science, says 16-year-old green activist Greta Thunberg. Watch her full address to told EU policymakers in Brussels here.

Climate change and ecosystem degradation are significant security threats. The EU should take urgent action to address these as a part of its foreign and security policy, write Johanna Nyman and Marianne Kettunen

Serbia’s official position in the dialogue with Kosovo is to go for a border demarcation along ethnic lines between Belgrade and its former province, the country’s foreign minister said, and not everyone was happy…

Madrid lawmakers are racing against time to sign off on an energy and climate plan for 2030 before domestic politics derail the process.

Looking for a new venue? The European Medicines Agency is looking for a new tenant for its former headquarters in the financial district of London. Brexit is no excuse to leave the contract, a court ruled.

Commissioner Jourová in Zagreb to participate in a Citizens’ Dialogue.